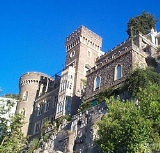 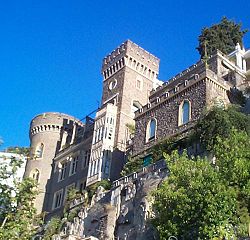 Lamont Young (1851-1929) Italian architect
Architect
An architect is a person trained in the planning, design and oversight of the construction of buildings. To practice architecture means to offer or render services in connection with the design and construction of a building, or group of buildings and the space within the site surrounding the...
and urban planner
Urban planner
An urban planner or city planner is a professional who works in the field of urban planning/land use planning for the purpose of optimizing the effectiveness of a community's land use and infrastructure. They formulate plans for the development and management of urban and suburban areas, typically...
from the late 19th and early 20th century. He was born in Naples
Naples
Naples is a city in Southern Italy, situated on the country's west coast by the Gulf of Naples. Lying between two notable volcanic regions, Mount Vesuvius and the Phlegraean Fields, it is the capital of the region of Campania and of the province of Naples...
and all of the works and urban design associated with his name are found in that city. In architecture, he is primarily associated with having constructed a number of pseudo-Victorian castles in the city, the most prominent of which is on the Corso Vittorio Emanuele overlooking the Chiaia section of town.

In urban design, Young planned a mammoth rebuilding of the city of Naples in the 1880s, including the construction of an underground train line. Although the plan was initially approved, it eventually lost out to a competitor plan, known as the risanamento
Risanamento
Risanamento is a name given to the large scale re-planning of Italian cities following unification. Particular examples are the Risanamento of Florence and Naples....
-- (lit. "making healthy again")--a more drastic version of urban surgery than even Young had planned and the one that was, over a 30-year period, responsible for the rebuilding of Naples before World War I
World War I
World War I , which was predominantly called the World War or the Great War from its occurrence until 1939, and the First World War or World War I thereafter, was a major war centred in Europe that began on 28 July 1914 and lasted until 11 November 1918...
.
The source of this article is wikipedia, the free encyclopedia.  The text of this article is licensed under the GFDL.