The lagoon covers 50 sqkm and is 12 kilometres (7.5 mi) long and 6 kilometres (3.7 mi) wide. The stream Arroyo Pan de Azucar discharges into the southwest of the lagoon, while the streams Arroyo del Sauce and Arroyo Mallorquina discharge in its north and northwest. A stream called Arroyo Potrero at the south end of the lagoon empties the water into the Río de la Plata
Río de la Plata
The Río de la Plata —sometimes rendered River Plate in British English and the Commonwealth, and occasionally rendered [La] Plata River in other English-speaking countries—is the river and estuary formed by the confluence of the Uruguay River and the Paraná River on the border between Argentina and...
at of the beach of Chihuahua
Chihuahua, Uruguay
Chihuahua is a resort in the Maldonado Department of Uruguay. It is located on the coast of Río de la Plata, about east of the resort Punta Negra. To the east the resort Punta Ballena and to the west it borders the resort Ocean Park with the stream Arroyo del Portero separating it with the later...
. 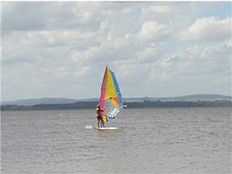 Any kind of non-motor powered water sports are allowed in the lagoon, such as wind surfing.

The Capitan Corbeta CA Curbelo International Airport
Capitan Corbeta CA Curbelo International Airport
Capitan Corbeta CA Curbelo International Airport , formerly called Laguna del Salce International Airport, is the airport serving Punta del Este, Uruguay, located in the adjoining municipality of Maldonado...
is in the southwest coast of the lagoon, just east of the lake resort La Capuera. To the southeast is the "Club del Lago Golf" course, to the south of which is the Arboretum Lussich
Arboretum Lussich
The Arboretum Lussich is an arboretum of 192ha located in the Maldonado Department of Uruguay near Punta del Este and Punta Ballena.- History :...
. In the east coast of the lagoon (from south to north) is the park "Parque Jacarandá", the location and resort "Las Cumbres", the hills Sierra de la Ballena, Cerro Caballero, Cerro de la Cruz and the location "Abra del Pedromo", with a statue of San Fransisco on the hill Cerro de Francés. On the west coast of the lagoon are the hills Cerro Sanguinetti and Cerro Las Mojinetes.
The source of this article is wikipedia, the free encyclopedia.  The text of this article is licensed under the GFDL.