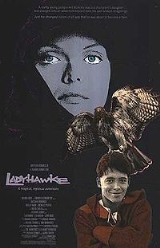 Overview
Ladyhawke is a 1985 fantasy film
Fantasy film
Fantasy films are films with fantastic themes, usually involving magic, supernatural events, make-believe creatures, or exotic fantasy worlds. The genre is considered to be distinct from science fiction film and horror film, although the genres do overlap...
directed by Richard Donner
Richard Donner
Richard Donner is an American film director, film producer, and comic book writer.The production company The Donners' Company is owned by Donner and his wife, producer Lauren Shuler Donner. After directing the horror film The Omen, Donner became famous for the hailed creation of the first modern...
, starring Matthew Broderick
Matthew Broderick
Matthew Broderick is an American film and stage actor who, among other roles, played the title character in Ferris Bueller's Day Off, Adult Simba in The Lion King film series, and Leo Bloom in the film and Broadway productions of The Producers.He has won two Tony Awards, one in 1983 for his...
, Rutger Hauer and Michelle Pfeiffer
Michelle Pfeiffer
Michelle Marie Pfeiffer is an American actress. She made her film debut in 1980 in The Hollywood Knights, but first garnered mainstream attention with her performance in Brian De Palma's Scarface . Pfeiffer has won numerous awards for her work...
. The film marked the second 20th Century Fox
20th Century Fox
Twentieth Century Fox Film Corporation — also known as 20th Century Fox, or simply 20th or Fox — is one of the six major American film studios...
film to be co-produced and co-released by Warner Bros.
Warner Bros.
Warner Bros. Entertainment, Inc., also known as Warner Bros. Pictures or simply Warner Bros. , is an American producer of film and television entertainment.One of the major film studios, it is a subsidiary of Time Warner, with its headquarters in Burbank,...
. The first was The Towering Inferno
The Towering Inferno
The Towering Inferno is a 1974 American action disaster film produced by Irwin Allen featuring an all-star cast led by Steve McQueen and Paul Newman.A co-production between Twentieth Century-Fox and Warner Bros...
; this time Warner got the U.S. distribution rights for the film and Fox the European and international rights.

In medieval Europe a thief called "The Mouse" escapes the dungeons of Aquila, setting in motion a chain of events that may save or destroy a beautiful woman and a brave captain.

Is the script based on any folk literature?
More
x