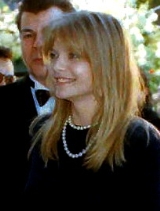 Overview
Michelle Marie Pfeiffer (icon; born April 29, 1958) is an American actress. She made her film debut in 1980 in The Hollywood Knights
The Hollywood Knights
The Hollywood Knights is an American motion picture comedy written and directed by Floyd Mutrux depicting the crass and mischievous antics and practical jokes of the remaining members of a 1950s-era car club turned social fraternity in and around Beverly Hills and Hollywood in 1965...
, but first garnered mainstream attention with her performance in Brian De Palma
Brian De Palma
Brian Russell De Palma is an American film director and writer. In a career spanning over 40 years, he is probably best known for his suspense and crime thriller films, including such box office successes as the horror film Carrie, Dressed to Kill, Scarface, The Untouchables, and Mission:...
's Scarface
Scarface (1983 film)
Scarface is a 1983 American epic crime drama movie directed by Brian De Palma, written by Oliver Stone, produced by Martin Bregman and starring Al Pacino as Tony Montana...
(1983). Pfeiffer has won numerous awards for her work. She received six consecutive Golden Globe Award
Golden Globe Award
The Golden Globe Award is an accolade bestowed by the 93 members of the Hollywood Foreign Press Association recognizing excellence in film and television, both domestic and foreign...
nominations, winning the Best Actress in a Motion Picture Drama
Golden Globe Award for Best Actress - Motion Picture Drama
The Golden Globe Award for Best Actress - Motion Picture - Drama was first awarded by the Hollywood Foreign Press Association as a separate category in 1951...
award in 1990 for The Fabulous Baker Boys
The Fabulous Baker Boys
The Fabulous Baker Boys is a 1989 American romantic drama musical film written and directed by Steve Kloves, and starring real life brothers Jeff Bridges and Beau Bridges as two brothers struggling to make a living as lounge jazz pianists in Seattle...
. She also won the BAFTA Award for Best Actress in a Supporting Role
BAFTA Award for Best Actress in a Supporting Role
Best Actress in a Supporting Role is a British Academy Film award presented annually by the British Academy of Film and Television Arts to recognize an actress who has delivered an outstanding supporting performance in a film...
for Dangerous Liaisons
Dangerous Liaisons
Dangerous Liaisons is a 1988 drama film based upon Christopher Hampton's play, Les liaisons dangereuses, which in turn was a theatrical adaptation of the 18th-century French novel Les Liaisons dangereuses by Pierre Choderlos de Laclos....
, and the Silver Bear for Best Actress
Silver Bear for Best Actress
The Silver Bear for Best Actress is the Berlin International Film Festival's award for achievement in performance by an actress.-Awards:- External links :*...
for Love Field
Love Field (film)
Love Field is a 1992 American independent drama film written by Don Roos and directed by Jonathan Kaplan, starring Michelle Pfeiffer and Dennis Haysbert...
, and has been nominated for three Academy Awards
Academy Awards
An Academy Award, also known as an Oscar, is an accolade bestowed by the American Academy of Motion Picture Arts and Sciences to recognize excellence of professionals in the film industry, including directors, actors, and writers...
for the same films.

Pfeiffer rose to prominence in the late 1980s and early 1990s with critically acclaimed performances in the films Dangerous Liaisons (1988), Married to the Mob
Married to the Mob
Married to the Mob is a 1988 American comedy film directed by Jonathan Demme, starring Michelle Pfeiffer and Matthew Modine.Michelle Pfeiffer, in something of a departure from her previous roles, gave an acclaimed lead performance as a gangster's widow from Brooklyn, opposite Matthew Modine as the...
(1988), The Fabulous Baker Boys (1989), The Russia House
The Russia House (film)
The Russia House is an American spy drama, based on the novel of the same name by John le Carré. It was directed by Fred Schepisi, and starred Sean Connery and Michelle Pfeiffer, with Roy Scheider, James Fox, John Mahoney, and Klaus Maria Brandauer in supporting roles.It was filmed on location in...
(1990), Frankie and Johnny (1991), Love Field (1992), Batman Returns
Batman Returns
Batman Returns is a 1992 American superhero film directed by Tim Burton. Based on the DC Comics character Batman, it is the sequel to Burton's Batman , and features Michael Keaton reprising the title role, with Danny DeVito as the Penguin and Michelle Pfeiffer as Catwoman.Burton originally did not...
(1992), and The Age of Innocence
The Age of Innocence (film)
The Age of Innocence is a 1993 American film adaptation of Edith Wharton's 1920 novel of the same name. The film was released by Columbia Pictures, directed by Martin Scorsese, and stars Daniel Day-Lewis, Michelle Pfeiffer, and Winona Ryder....
(1993).