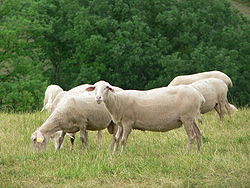 The Lacaune is a breed
Breed
A breed is a group of domestic animals or plants with a homogeneous appearance, behavior, and other characteristics that distinguish it from other animals or plants of the same species. Despite the centrality of the idea of "breeds" to animal husbandry, there is no scientifically accepted...
of domestic sheep
Domestic sheep
Sheep are quadrupedal, ruminant mammals typically kept as livestock. Like all ruminants, sheep are members of the order Artiodactyla, the even-toed ungulates. Although the name "sheep" applies to many species in the genus Ovis, in everyday usage it almost always refers to Ovis aries...
originating near Lacaune
Lacaune
Lacaune is a commune in the Tarn department in southern France.-References:*...
in southern France. The Lacaune is the most widely used dairying sheep breed in France, with a population of about 800,000 ewes. Notably, it is the predominant breed used in the production of Roquefort cheese in France.

The Lacaune has been used as a milking sheep in France for a very long time, but milking wasn't the dominant feature of the breed until recently. In the late 1960s, the average milk yield per ewe was only about 70 liters during the human milking period (and excluding the lamb suckling period) per annum. Remarkably, by the late 1990s the milk yield had quadrupled to 280 liters per annum. The Lacaune is now one of the world's high-yielding milk breeds. This was the result of a large-scale, rigorous selection
Selective breeding
Selective breeding is the process of breeding plants and animals for particular genetic traits. Typically, strains that are selectively bred are domesticated, and the breeding is sometimes done by a professional breeder. Bred animals are known as breeds, while bred plants are known as varieties,...
program organized by a French government agency, which included artificial insemination of several million ewes over the years, and a vast array of government support for recording the performance of the progeny on many farms with respect to the milk yield and other outcomes; and improved knowledge about animal management and nutrition for sheep milk production; and the willingness of many farmers to participate in the program and take advantage of what was being learned. The combination of these and other factors brought about an improvement of 6.3% per year in milk yield per ewe in the breed over the 30-year period. The 6.3% gain is decomposable to "a phenotypic
Phenotype
A phenotype is an organism's observable characteristics or traits: such as its morphology, development, biochemical or physiological properties, behavior, and products of behavior...
gain of 3.9% (better management and nutrition) and a genetic gain of 2.4%. Since 1995 the phenotypic gain has been negligible."

The success of the large-scale breeding program has not resulted in the extinction of the pre-existing, lower-milk-yielding, Lacaunes.
The source of this article is wikipedia, the free encyclopedia.  The text of this article is licensed under the GFDL.