Encyclopedia
The La Merced Market is a traditional public market
Traditional fixed markets in Mexico
Traditional fixed markets in Mexico go by a variety of names such as "mercados públicos" , "mercados municipales" or even more often simply "mercados"...
located in the eastern edge of the historic center of Mexico City
Historic center of Mexico City
The historic center of Mexico City is also known as the "Centro" or "Centro Histórico." This neighborhood is focused on the Zócalo or main plaza in Mexico City and extends in all directions for a number of blocks with its farthest extent being west to the Alameda Central The Zocalo is the largest...
and is the largest retail traditional food market in the entire city. The area, also called La Merced, has been synonymous with commercial activity since the early colonial period when traders arrived here from other parts of New Spain. At one time, nearly the entire neighborhood was filled with market stalls and in the 1860s it was decided to build a permanent market on the grounds of the old La Merced monastery
La Merced Cloister
The La Merced Cloister is all that is left of a monastery complex built in the late 16th and early 17th century by the Mercedarian order. It is located on Uruguay and Talavera Streets in the historic downtown of Mexico City...
. In the first half of the 20th century, this market was the major wholesaler for the entire city. This ended when the Central de Abasto
Central de Abasto, Mexico City
The Central de Abasto is Mexico City’s main wholesale market for produce and other foodstuffs run similarly to traditional public markets. It was constructed to be the meeting point for producers, wholesalers, retailers and consumers for the entire country...
was opened in the 1980s, but La Merced remains the largest traditional retail market. The market area is also known for flagrant prostitution in which women can be seen soliciting at all hours of the day and night. It is estimated that about one third of these prostitutes are underage.

La Merced is located east of the main plaza or Zocalo
Zócalo
The Zócalo is the main plaza or square in the heart of the historic center of Mexico City. The plaza used to be known simply as the "Main Square" or "Arms Square," and today its formal name is Plaza de la Constitución...
in several very large buildings, and is the city’s largest traditional retail market. Metro La Merced has openings both just outside the market and inside one of the buildings. Outside the buildings, the unofficial market or “tianguis
Tianguis
A tianguis is an open air market or bazaar that is traditionally held on certain market days in a town or city neighborhood in Mexico and Central America. This bazaar tradition has its roots well into the pre-Hispanic period and continues in many cases essentially unchanged into the present day....
” continues on the sidewalks and streets between this market and the Zocalo. This kind of commerce is illegal, but laws against it are only intermittently enforced as unemployment is high, and peddlers pay bribes to local bosses who in turn pay bribes to local officials. This means that both inside and outside the market, pedestrian traffic jams are frequent, making pushing and shoving necessary and socially acceptable. The market area also generates about 450 tons of trash daily.

The name La Merced is synonymous with commerce in the city. The market and neighborhood is located on the far eastern side of the original layout of Mexico City after the Conquest. Here many traders arrived with wares from near and far. The market is named after the neighborhood, La Merced, which in turn was named after the monastery Nuestra Señora de la Merced de Redención de Cautivos established in 1594 and simply called the monastery of La Merced. Most of this monastery has since disappeared, leaving only its cloister with its Plateresque
Plateresque
Plateresque, meaning "in the manner of a silversmith" , was an artistic movement, especially architectural, traditionally held to be exclusive to Spain and its territories, which appeared between the late Gothic and early Renaissance in the late 15th century, and spread over the next two centuries...
decoration. The neighborhood is an old one, and stories and legends, such as the whispers of Doña Esperanza Goyeneche de Ruiz Garcia who died here. Another involves an indigenous chief who received money for being a spy for the Spaniards and was found out. It is said that when this happened, he sat still never moving until he died of sadness.

By the end of the 18th century, almost the entire neighborhood was one great market, which became bigger when the markets of the Zocalo area were banished around the same time. In the 19th century, the famous Circo Orrín with the first Mexican clown Ricardo Bell of Pachuca
Pachuca
Pachuca, formally Pachuca de Soto is the capital of the Mexican state of Hidalgo. It is located in the south-central part of the state. Pachuca de Soto is also the name of the municipality of which the city serves as municipal seat...
regularly stopped near this market.

In the 1860s, it was decided to put the market under a roof, and the buildings were constructed on the old monastery grounds. In 1863, the first permanent buildings were constructed. By the early 20th century La Merced was the major wholesale and retail market of Mexico City, especially for foodstuffs. It continued to be the wholesale market for the city during the post-Mexican Revolution period until about the 1960s. At that time, the Central de Abasto market was created in the south of the city to take over and modernize the wholesaling of foodstuffs, especially produce and meat. La Merced continues to be the largest retail traditional market of Mexico City for a wide variety of everyday products such as fruit, vegetables, meat, poultry, toys, clothes; flowers, candy and more.

In 1988, a fireworks stand in La Merced exploded which killed 61 people. In 1998, a major fire destroyed two-thirds of the main hall of the market, along with 572 stalls selling dried chili peppers, fruit, vegetables, shoes and piñatas in the early morning hours of 4 May . No one was killed or injured and the cause was suspected to be faulty wiring. It took over 100 firemen more than three hours to get the fire under control. 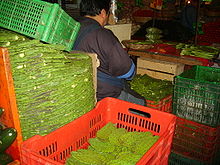 The largest building of the complex is dedicated mostly to the sale of fruits and vegetables. Other buildings sell household items such as juicers, tinware, spoons, cleaning supplies and much more. There is constant movement of people here, with many shouting out to potential customers. Work begins here in the very early morning hours and ends in the evening. The market is filled at all hours with truck drivers, sellers, buyers, butchers and cooks.

Basic Mexican foodstuffs is the backbone of this markets selling Mexican spices such as epazote
Epazote
Epazote, wormseed, Jesuit's tea, Mexican tea, Paico or Herba Sancti Mariæ is an herb native to Central America, South America, and southern Mexico....
, chili pepper
Chili pepper
Chili pepper is the fruit of plants from the genus Capsicum, members of the nightshade family, Solanaceae. The term in British English and in Australia, New Zealand, India, Malaysia and other Asian countries is just chilli without pepper.Chili peppers originated in the Americas...
s fresh and dried of just about every variety, nopal
Nopal
Nopales are a vegetable made from the young cladode segments of prickly pear, carefully peeled to remove the spines. These fleshy pads are flat and about hand-sized. They can be purple or green...
s (cactus pads), pig skins fried whole, corn, and uncommon items such as wild mushrooms including a variety that look like chantrelle but denser. One of the few places to find truly authentic Oaxaca cheese in the city. Vendors can be seen tying stacks of banana leaves, cutting spines from nopals, and selling “secret” herbal remedies.
La Merced, like most Mexican traditional markets, is a favored place to eat Mexican street food, called “antojitos” (lit. cravings). Two specialties here are quesadillas and tostadas. Quesadilla
Quesadilla
A quesadilla is a flour or corn tortilla filled with a savoury mixture containing cheese and other ingredients, then folded in half to form a half-moon shape. This dish originated in Mexico, and the name is derived from the Spanish word queso ....
s can be had with a variety of fillings along with the cheese (typically Oaxaca cheese
Oaxaca cheese
Queso Oaxaca is a white, semihard cheese from Mexico, similar to unaged Monterey Jack, but with a mozzarella-like string cheese texture. It is named after the state of Oaxaca in southern Mexico, where it was first made. It is available in several different shapes. It is also known as quesillo...
) such as stewed pork stomach, pickled pork fat, huitlacoche (corn fungus) and squash flowers. The quesadillas sold here are typically long and cooked on a comal
Comal
Comal can refer to:*COMAL, a computer programming language*Comal , frequently used to cook tortillasComal is the name of several places:*Comal County, Texas*Comal River, Texas*Comal Springs...
, often from blue corn
Blue corn
Blue corn is a variety of maize grown in northern Mexico and the Southwestern United States, particularly in the states of Arizona and New Mexico....
dough. It is topped with red or green chili peppers that have been blended with onions and salt into a watery paste. Like the quesadillas, tostada
Tostada
Tostada is a Spanish word which literally means "toasted". It is used in Latin America to name several different traditional local dishes which have in common the fact they are toasted or use a toasted ingredient as the main base of their preparation. There is a gender difference between "tostada"...
s have a wide variety of toppings and the crunchy tortilla sometimes has unusual flavorings such as sesame seeds and chipotle.

Merced is considered to be a “tolerance zone” for prostitution, meaning that police generally do not intervene. Prostitution exists in just about all parts of Mexico City but it is most obvious here. At almost any hour of the day, scantily clad women can be seen walking around. Many of these prostitutes are underage. Prices can be as low as 80 ($8 USD) pesos for an “encuentro” (encounter) or 50 pesos for a single sexual act. Many small hotels are near here, some of which charge as little as 30 pesos for an hour or about 200 for a night. Many of the customers are truck drivers who have time while their vehicles are being unloaded at the market. In 2007, prostitutes were killed in this area and seven in 2008. Nearly all of the murders have gone unpunished but suspects include those against prostitution here and pimps. It is estimated about one third of prostitutes here are underage. Bribes to officials to keep the industry running are estimated to be about $450,000 USD a year.
The source of this article is wikipedia, the free encyclopedia.  The text of this article is licensed under the GFDL.