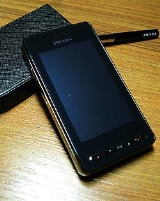 Encyclopedia
The LG KE850, also known as the LG Prada
Prada
Prada S.p.A. is an Italian fashion label specializing in luxury goods for men and women , founded by Mario Prada.-Foundations:...
, is a touchscreen
Touchscreen
A touchscreen is an electronic visual display that can detect the presence and location of a touch within the display area. The term generally refers to touching the display of the device with a finger or hand. Touchscreens can also sense other passive objects, such as a stylus...
mobile phone
Mobile phone
A mobile phone is a device which can make and receive telephone calls over a radio link whilst moving around a wide geographic area. It does so by connecting to a cellular network provided by a mobile network operator...
made by LG Electronics
LG Electronics
LG Electronics is a global electronics and telecommunications company headquartered in Yeouido, Seoul, South Korea. The company operates its business through five divisions: mobile communications, home entertainment, home appliance, air conditioning and business solution...
. It was first announced on December 12, 2006. Images of the device appeared on websites such as Engadget Mobile on December 15, 2006. An official press release showing an image of the device appeared on January 18, 2007. LG Prada sold 1 million units in the first 18 months.

A second version of the phone, the LG Prada II (KF900)
LG Prada II (KF900)
The LG KF900, also known as the LG Prada II, is a touchscreen, with slide out qwerty keyboard, mobile phone made by LG Electronics. It is the second version of the Prada phone, following the original LG Prada . The phone's looks are basically the same as the original Prada, but the Prada II is...
was announced October 13, 2008. It was released December 2008.

LG Electronics has claimed the iPhone
IPhone
The iPhone is a line of Internet and multimedia-enabled smartphones marketed by Apple Inc. The first iPhone was unveiled by Steve Jobs, then CEO of Apple, on January 9, 2007, and released on June 29, 2007...
's design was copied from the LG Prada. Woo-Young Kwak, head of LG Mobile Handset R&D Center, said at a press conference, “We consider that Apple copied the Prada phone after the design was unveiled when it was presented in the iF Design Award and won the prize in September 2006.”

LG later claimed that Apple stole both the ideas and concept of the Prada phone. A lawsuit by LG had been rumored prior to this announcement; however, LG has remained silent on whether or not they will file a lawsuit.