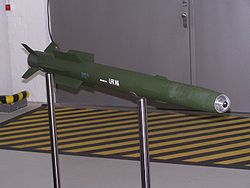 LFK NG from Lenkflugkörper Neue Generation ("New Generation Guided Missile"), is currently under development by LFK
LFK
LFK is a German missile systems company and a subsidiary of EADS. Today officially "MBDA Germany" but better known as LFK-Lenkflugkörpersysteme GmbH...
-Lenkflugkörpersysteme and Diehl BGT Defence
Diehl BGT Defence
Diehl BGT Defence GmbH & Ko KG is a German arms manufacturer and a subsidiary of the Diehl Stiftung GmbH with headquarters in Überlingen. Diehl BGT Defence produces mainly missiles and ammunition....
as the new short-range surface-to-air missile system for the German Army
German Army
The German Army is the land component of the armed forces of the Federal Republic of Germany. Following the disbanding of the Wehrmacht after World War II, it was re-established in 1955 as the Bundesheer, part of the newly formed West German Bundeswehr along with the Navy and the Air Force...
as a replacement for its former Roland air defence systems
Roland (air defence)
The Roland is a Franco-German mobile short-range surface-to-air missile system. The Roland was also purchased by the U.S. Army as one of very few foreign SAM systems....
and as a part of the army's new SysFla air defence program to supplement the new Ozelot air defence systems.

The missile features a highly sensitive infrared seeker, which is capable of identifying targets with an extremely low infrared signature, such as other missiles or UAVs, but also aircraft and helicopters.

LFK NG will also have a penetrator warhead to engage armored targets.

Being a part of Germany's SysFla project, the LFK NG will be integrated in stationary and mobile air defence launch platforms.