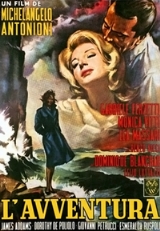 The film was produced in 1959 on location in Italy under difficult financial and physical conditions. It made Monica Vitti an international star. It is the first of a "trilogy
Trilogy
A trilogy is a set of three works of art that are connected, and that can be seen either as a single work or as three individual works. They are commonly found in literature, film, or video games...
" by Antonioni, followed by La Notte
La Notte
La Notte is a 1961 Italian film directed by Michelangelo Antonioni. It is considered the central film of a trilogy beginning with L'avventura and ending with L'Eclisse.- Plot :...
(1961) and Eclipse (1962).

L'Avventura has a narrative structure in which an apparently important central mystery is gradually forgotten and left unsolved.

The story begins as two young women, Anna (Lea Massari) and Claudia (Monica Vitti), meet for a yacht
Yacht
A yacht is a recreational boat or ship. The term originated from the Dutch Jacht meaning "hunt". It was originally defined as a light fast sailing vessel used by the Dutch navy to pursue pirates and other transgressors around and into the shallow waters of the Low Countries...
trip. After picking up Anna's lover Sandro (Gabriele Ferzetti), the three join two wealthy couples from Rome
Rome
Rome is the capital of Italy and the country's largest and most populated city and comune, with over 2.7 million residents in . The city is located in the central-western portion of the Italian Peninsula, on the Tiber River within the Lazio region of Italy.Rome's history spans two and a half...
on the boat and visit "Lisca Bianca," an almost unpopulated volcanic island off the coast of Sicily
Sicily
Sicily is a region of Italy, and is the largest island in the Mediterranean Sea. Along with the surrounding minor islands, it constitutes an autonomous region of Italy, the Regione Autonoma Siciliana Sicily has a rich and unique culture, especially with regard to the arts, music, literature,...
, where Anna shows her boredom and unhappiness with the sometimes childish Sandro. After napping on the rocks, they awaken to find that Anna has gone without a trace. Annoyed at first, then worried, they search for her, helped by Anna's diplomat
Diplomat
A diplomat is a person appointed by a state to conduct diplomacy with another state or international organization. The main functions of diplomats revolve around the representation and protection of the interests and nationals of the sending state, as well as the promotion of information and...
father who soon comes to the island with a police ship and helicopter
Helicopter
A helicopter is a type of rotorcraft in which lift and thrust are supplied by one or more engine-driven rotors. This allows the helicopter to take off and land vertically, to hover, and to fly forwards, backwards, and laterally...
.

Within a few days, they drift back to their lives as the story shifts to a new and somewhat stormy relationship between Sandro and Claudia who is at once happy and wracked with guilt over her missing best friend. On the rooftop of a cathedral
Cathedral
A cathedral is a Christian church that contains the seat of a bishop...
, Sandro asks Claudia to marry him, but she is too startled by this to answer in a meaningful way. The two then check into a swank resort hotel near Messina where Sandro's business partner is staying. While Claudia goes to bed, Sandro stays up and wanders among the partying guests. Claudia spends a sleepless night waiting for him to come back to their room and as dawn breaks frantically searches for Sandro throughout the deserted public spaces of the hotel, only to find him on a couch with a costly call girl
Call girl
A call girl or female escort is a sex worker who is not visible to the general public; nor does she usually work in an institution like a brothel, although she may be employed by an escort agency...
. Claudia flees them both and breaks down into tears on a vista overlooking the sea. Sandro, seemingly disgusted with himself, catches up to her.

The last scene, which has no dialogue, starkly shows Sandro's almost hopeless weakness and emptiness as he sits in tears before a blank, scarred wall. Claudia stands steadfastly beside him, while Mount Etna
Mount Etna
Mount Etna is an active stratovolcano on the east coast of Sicily, close to Messina and Catania. It is the tallest active volcano in Europe, currently standing high, though this varies with summit eruptions; the mountain is 21 m higher than it was in 1981.. It is the highest mountain in...
broods before her as if ready to erupt.

Released in 1960, the film was booed by members of the audience during its premiere at the Cannes Film Festival
1960 Cannes Film Festival
-Jury:*Georges Simenon *Marc Allégret *Louis Chauvet *Diego Fabbri *Hidemi Ima *Grigori Kozintsev *Maurice Leroux *Max Lippmann *Henry Miller...
(Antonioni and Vitti fled the theater); but after a second screening it won the Jury Prize
Jury Prize (Cannes Film Festival)
The Jury Prize is an award presented at the Cannes Film Festival. It is chosen by the jury from the 'official section' of movies at the festival. It is considered the third most prestigious prize at the film festival, after the Palme d'Or and the Grand Prix....
and went on to both international box office success and what has since been described as "hysteria."

L'Avventura influenced the visual language of cinema, changing how subsequent films looked, and has been named by some critics as one of the best ever made. However, it has been criticized by others for its seemingly uneventful plot and slow pacing along with the existentialist themes.

In 2010, it was ranked #40 in Empire
Empire (magazine)
Empire is a British film magazine published monthly by Bauer Consumer Media. From the first issue in July 1989, the magazine was edited by Barry McIlheney and published by Emap. Bauer purchased Emap Consumer Media in early 2008...
magazine's "The 100 Best Films Of World Cinema."

Much has been made of Anna's unsolved disappearance, which Roger Ebert
Roger Ebert
Roger Joseph Ebert is an American film critic and screenwriter. He is the first film critic to win a Pulitzer Prize for Criticism.Ebert is known for his film review column and for the television programs Sneak Previews, At the Movies with Gene Siskel and Roger Ebert, and Siskel and Ebert and The...
has described as being linked to the film's mostly wealthy, bored, and spoiled characters, none of whom have fulfilling relationships: They are all, wrote Ebert, "on the brink of disappearance." Along with much of Antonioni's other work, L'Avventura is often cited as an early feminist film with strong and richly characterized female protagonists.
The source of this article is wikipedia, the free encyclopedia.  The text of this article is licensed under the GFDL.