Encyclopedia
Kyustendil is a town in the far west of Bulgaria
Bulgaria
Bulgaria , officially the Republic of Bulgaria , is a parliamentary democracy within a unitary constitutional republic in Southeast Europe. The country borders Romania to the north, Serbia and Macedonia to the west, Greece and Turkey to the south, as well as the Black Sea to the east...
, the capital of Kyustendil Province
Kyustendil Province
-Religion:Religious adherence in the province according to 2001 census:-Language:Mother tongues in the province according to 2001 census:* 153,242 Bulgarian * 7,929 Roma  * 1363 others and unspecified -Ethnic groups:...
, with a population of 44 416 (2011 census). Kyustendil is situated in the southern part of the Kyustendil Valley, 90 km southwest of Sofia
Sofia
Sofia is the capital and largest city of Bulgaria and the 12th largest city in the European Union with a population of 1.27 million people. It is located in western Bulgaria, at the foot of Mount Vitosha and approximately at the centre of the Balkan Peninsula.Prehistoric settlements were excavated...
. It was named after the medieval lord of the surrounding region, Constantine Dragaš
Constantine Dragas
Constantine Dragaš Dejanović was a Serbian magnate that ruled the area around Kyustendil from 1378, during the fall of the Serbian Empire, until his death on May 17, 1395 at the battle of Rovine...
.

There are more than 40 mineral spring
Mineral spring
Mineral springs are naturally occurring springs that produce water containing minerals, or other dissolved substances, that alter its taste or give it a purported therapeutic value...
s in the town. The waters have a high content of sulfite
Sulfite
Sulfites are compounds that contain the sulfite ion SO. The sulfite ion is the conjugate base of bisulfite. Although the acid itself is elusive, its salts are widely used.-Structure:...
compounds. These are used for the treatment of the locomotory system, gynecological and other kinds of diseases. The resort region includes several baths, balneological complexes and others.

Kyustendil is located at the foot of the Osogovo
Osogovo
Osogovo or Osogovska Planina is a mountain and ski resort between southwestern Bulgaria and northeastern Republic of Macedonia,...
mountain, on both banks of the Banska River
Banska River
The Banska River is a river in Haskovo Province, southeastern Bulgaria. The river is long.The Banska springs out from Sofidzhik Peak in the Eastern Rhodopes. It passes through the villages of Tatarevo, Garvanovo, Klokotnitsa and Dobrich. Between Tatarevo and Garvanovo it forms the Boaza Gorge...
and is a well-known centre of balneology and fruit growing. The town is 90 kilometres southwest of Sofia
Sofia
Sofia is the capital and largest city of Bulgaria and the 12th largest city in the European Union with a population of 1.27 million people. It is located in western Bulgaria, at the foot of Mount Vitosha and approximately at the centre of the Balkan Peninsula.Prehistoric settlements were excavated...
, 69 km northwest of Blagoevgrad
Blagoevgrad
Blagoevgrad is а city in southwestern Bulgaria, the administrative centre of Blagoevgrad Province, with a population of about 74,302 . It lies on the banks of the Blagoevgradska Bistritsa River....
and 22 km from the border with the Republic of Macedonia
Republic of Macedonia
Macedonia , officially the Republic of Macedonia , is a country located in the central Balkan peninsula in Southeast Europe. It is one of the successor states of the former Yugoslavia, from which it declared independence in 1991...
and Serbia
Serbia
Serbia , officially the Republic of Serbia , is a landlocked country located at the crossroads of Central and Southeast Europe, covering the southern part of the Carpathian basin and the central part of the Balkans...
. The fortress was built by the Romans. Thermae
Thermae
In ancient Rome, thermae and balnea were facilities for bathing...
, basilicas, floor mosaics have been uncovered.

A Thracian
Thracians
The ancient Thracians were a group of Indo-European tribes inhabiting areas including Thrace in Southeastern Europe. They spoke the Thracian language – a scarcely attested branch of the Indo-European language family...
settlement was founded at the place of the modern town in the 5th-4th centuries BC and the Romans
Ancient Rome
Ancient Rome was a thriving civilization that grew on the Italian Peninsula as early as the 8th century BC. Located along the Mediterranean Sea and centered on the city of Rome, it expanded to one of the largest empires in the ancient world....
developed it into an important stronghold, balneological resort and trade junction called Pautalia in the 1st century AD. Many Thracian and Roman objects are exhibited in the city's Regional History Museum, most notably an impressive numismatic collection.

The Hisarlaka fortress was built in the 4th century and the town was mentioned under the Slavic name of Velbazhd (Велбъжд, meaning "camel") in a 1019 charter by the Byzantine
Byzantine
Byzantine usually refers to the Roman Empire during the Middle Ages.Byzantine may also refer to:* A citizen of the Byzantine Empire, or native Greek during the Middle Ages...
Emperor Basil II
Basil II
Basil II , known in his time as Basil the Porphyrogenitus and Basil the Young to distinguish him from his ancestor Basil I the Macedonian, was a Byzantine emperor from the Macedonian dynasty who reigned from 10 January 976 to 15 December 1025.The first part of his long reign was dominated...
. It became a major religious and administrative centre. 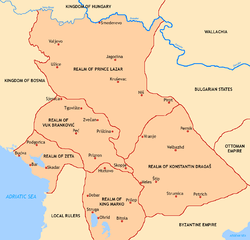 During the reign of Kaloyan of Bulgaria
Kaloyan of Bulgaria
Kaloyan the Romanslayer , Ivan II , ruled as emperor of Bulgaria 1197-1207. He is the third and youngest brother of Peter IV and Ivan Asen I who managed to restore the Bulgarian Empire...
, the town became part of the Second Bulgarian Empire
Second Bulgarian Empire
The Second Bulgarian Empire was a medieval Bulgarian state which existed between 1185 and 1396 . A successor of the First Bulgarian Empire, it reached the peak of its power under Kaloyan and Ivan Asen II before gradually being conquered by the Ottomans in the late 14th-early 15th century...
, acquiring its modern name in the 16th century, named after local feudal lord Konstantin Dragash
Constantine Dragas
Constantine Dragaš Dejanović was a Serbian magnate that ruled the area around Kyustendil from 1378, during the fall of the Serbian Empire, until his death on May 17, 1395 at the battle of Rovine...
(ruled from 1379 to 1395). In 1330 the Battle of Velbazhd took place in the vicinity of the town. After that war, the city came under Serbian rule
Serbian Empire
The Serbian Empire was a short-lived medieval empire in the Balkans that emerged from the Serbian Kingdom. Stephen Uroš IV Dušan was crowned Emperor of Serbs and Greeks on 16 April, 1346, a title signifying a successorship to the Eastern Roman Empire...
, which lasted between 1330-1355. About 1355 Velbazhd and its region were included in the semi-independent feudal Velbazhd principality of Despot Deyan. In 1372 the Turks conquered the town. It was known as Köstendil under Ottoman rule. The name Köstendil was derived from Constantine Dragas' name. The city was a sanjak centre initially in Rumelia
Rumelia
Rumelia was an historical region comprising the territories of the Ottoman Empire in Europe...
province, after that in the Bitola
Bitola
Bitola is a city in the southwestern part of the Republic of Macedonia. The city is an administrative, cultural, industrial, commercial, and educational centre. It is located in the southern part of the Pelagonia valley, surrounded by the Baba and Nidže mountains, 14 km north of the...
and Niš
Niš
Niš is the largest city of southern Serbia and third-largest city in Serbia . According to the data from 2011, the city of Niš has a population of 177,972 inhabitants, while the city municipality has a population of 257,867. The city covers an area of about 597 km2, including the urban area,...
vilayets. It was a kaza centre in the Sofia
Sofia
Sofia is the capital and largest city of Bulgaria and the 12th largest city in the European Union with a population of 1.27 million people. It is located in western Bulgaria, at the foot of Mount Vitosha and approximately at the centre of the Balkan Peninsula.Prehistoric settlements were excavated...
sanjak of Danube Province
Danube Province, Ottoman Empire
The Vilayet of the Danube or Danubian Vilayet was a vilayet of the Ottoman Empire from 1864 to 1878. In the late 19th century it reportedly had an area of ....
until the creation of the Principality of Bulgaria
Principality of Bulgaria
The Principality of Bulgaria was a self-governing entity created as a vassal of the Ottoman Empire by the Treaty of Berlin in 1878. The preliminary treaty of San Stefano between the Russian Empire and the Porte , on March 3, had originally proposed a significantly larger Bulgarian territory: its...
in 1878.

Pautalia Glacier
Pautalia Glacier
Pautalia Glacier is a glacier on Burgas Peninsula, Livingston Island, Antarctica bounded by Petko Voyvoda Peak to the west, Sozopol Gap to the northwest, Kaloyan Nunatak to the north and Shabla Knoll to the east. Extending 700 m in northwest-southeast direction and 1.1 km in southwest-northeast...
on Livingston Island in the South Shetland Islands
South Shetland Islands
The South Shetland Islands are a group of Antarctic islands, lying about north of the Antarctic Peninsula, with a total area of . By the Antarctic Treaty of 1959, the Islands' sovereignty is neither recognized nor disputed by the signatories and they are free for use by any signatory for...
, Antarctica is named after Pautalia (the Thracian
Thrace
Thrace is a historical and geographic area in southeast Europe. As a geographical concept, Thrace designates a region bounded by the Balkan Mountains on the north, Rhodope Mountains and the Aegean Sea on the south, and by the Black Sea and the Sea of Marmara on the east...
name for the settlement).