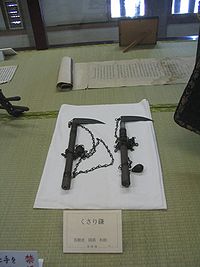 The is a traditional Japan
Japan
Japan is an island nation in East Asia. Located in the Pacific Ocean, it lies to the east of the Sea of Japan, China, North Korea, South Korea and Russia, stretching from the Sea of Okhotsk in the north to the East China Sea and Taiwan in the south...
ese weapon
Weapon
A weapon, arm, or armament is a tool or instrument used with the aim of causing damage or harm to living beings or artificial structures or systems...
that consists of a kama
Kama (weapon)
The is a traditional Filipino and Japanese farming implement similar to a small scythe used for reaping crops and also employed as a weapon...
(the Japanese
Japanese language
is a language spoken by over 130 million people in Japan and in Japanese emigrant communities. It is a member of the Japonic language family, which has a number of proposed relationships with other languages, none of which has gained wide acceptance among historical linguists .Japanese is an...
equivalent of a sickle) on a metal chain (kusari) with a heavy iron weight (fundo) at the end. The kusarigama is said to have developed during the Muromachi period
Muromachi period
The is a division of Japanese history running from approximately 1336 to 1573. The period marks the governance of the Muromachi or Ashikaga shogunate, which was officially established in 1338 by the first Muromachi shogun, Ashikaga Takauji, two years after the brief Kemmu restoration of imperial...
.
The art of handling the kusarigama is called kusarigamajutsu
Kusarigamajutsu
is the art of using the Japanese weapon kusarigama.Kusarigamajutsu is featured in several separate martial arts such as Koga Ha Kurokawa Ryū Heiho Ninjutsu, Suio Ryū and Shintō Musō-ryū...
.

Attacking with the weapon usually entailed swinging the weighted chain in a large circle over one's head, and then whipping it forward to entangle an opponent's spear, sword, or other weapon, or immobilizing his arms or legs. This allows the kusarigama user to easily rush forward and strike with the sickle.

A kusarigama wielder might also strike with the spinning weighted end of the chain directly, causing serious or deadly injury to his opponent while still outside the range of the opponent's sword or spear.

According to some accounts, the kusarigama is a weapon that is well-suited against swords and spears. Records show that the kusarigama was extremely popular in feudal Japan, with many schools teaching it, from about the 12th to 17th century, including by Kōga-ryū
Koga-ryu
Kōka-ryū is a historical school of ninjutsu. It originated from the region of Kōka...
.

A notable example of the use and misuse of the weapon is the story of the great 17th century kusarigama teacher Yamada Shinryukan
Yamada Shinryukan
Yamada Shinryukan was a semi-famous swordsman following the Edo period of the 17th century of Japan. Shinryukan was a noted teacher of the kusarigama who killed many rival swordsmen with his superb skills. Shinryukan was finally defeated when he fought against the semi-famous swordsman, Araki...
. Shinryukan was known to have killed many swordsmen with his weapon, until he was lured into a bamboo
Bamboo
Bamboo is a group of perennial evergreens in the true grass family Poaceae, subfamily Bambusoideae, tribe Bambuseae. Giant bamboos are the largest members of the grass family....
grove by Araki Mataemon
Araki Mataemon
was a Japanese samurai active in the early Edo period. Araki Mataemon was the founder of the koryū martial art Yagyū Shingan-ryū, known sometimes as Yagyū Shingan-ryū Taijutsu....
. There, because of the terrain he was unable to swing the chain and trap Mataemon's sword, and was thus killed.

Perhaps one of the most famous historical users of the kusarigama is Shishido Baiken
Shishido Baiken
Shishido Baiken was a Japanese swordsman active in the early years of the Edo period . Baiken was a skilled swordsman, and soon on became a skilled practitioner of the kusarigama...
. A swordsman of great skill, he was proficient with the kusarigama, but was killed by the legendary samurai Miyamoto Musashi
Miyamoto Musashi
, also known as Shinmen Takezō, Miyamoto Bennosuke or, by his Buddhist name, Niten Dōraku, was a Japanese swordsman and rōnin. Musashi, as he was often simply known, became renowned through stories of his excellent swordsmanship in numerous duels, even from a very young age...
when the latter used a throwing knife to cause a non-fatal injury from outside the radius of the chain, and then moved in for the killing blow with his sword.

Kusarigama are depicted in many types of popular media.
In video games the kusarigama is used by Hattori Hanzō
Hattori Hanzo
, also known as , was a famous samurai and ninja master of the Sengoku era, credited with saving the life of Tokugawa Ieyasu and then helping him to become the ruler of united Japan. Today, he is often a subject of modern popular culture.-Biography:...
in the video game series Samurai Warriors
Samurai Warriors
is the first title in the series of video games created by Koei's Omega Force team based loosely around the Sengoku period of Japanese history and it is a spinoff of the Dynasty Warriors series...
and by Ryu Hayabusa
Ryu Hayabusa
is the protagonist of the Ninja Gaiden video game series as well as a player character in the Dead or Alive series, both published by Tecmo. According to the game canon, Ryu Hayabusa is a ninja and the leader of the that has spiritual, physical and magical ties to ancient dragons...
in the Ninja Gaiden
Ninja Gaiden
is a series of video games by Tecmo featuring the ninja Ryu Hayabusa as its protagonist. The series was originally known as in Japan. The word "gaiden" in the North American Ninja Gaiden title means "side-story" in Japanese, even though the Ninja Gaiden series is not a spinoff of a previous series...
series. In manga/anime Soul Eater
Soul Eater (manga)
is a Japanese manga written and illustrated by Atsushi Ōkubo. Set at the "Death Weapon Meister Academy," the series revolves around three teams consisting of a weapon meister and human weapon...
, character Black Star's partner Tsubaki can shapeshift into various weapons, although her default form is a kusarigama that uses an extra sickle instead of a weighted bludgeon and the character Kohaku from the manga and anime Inuyasha
InuYasha
, also known as , is a Japanese manga series written and illustrated by Rumiko Takahashi. It premiered in Weekly Shōnen Sunday on November 13, 1996 and concluded on June 18, 2008...
is a demon slayer who makes use of the kusarigama,
In the webcomics Sluggy Freelance
Sluggy Freelance
Sluggy Freelance is a popular, long-running daily webcomic written and drawn by Pete Abrams. The comic has over 100,000 daily readers and premiered on August 25, 1997...
The character Kusari is even named after her favorite weapon.