Encyclopedia
Konstantin Fyodorovich Yuon or Juon ( - April 11, 1958) was a noted Russia
Russia
Russia or , officially known as both Russia and the Russian Federation , is a country in northern Eurasia. It is a federal semi-presidential republic, comprising 83 federal subjects...
n painter and theatre designer associated with the Mir Iskusstva
Mir iskusstva
Mir iskusstva was a Russian magazine and the artistic movement it inspired and embodied, which was a major influence on the Russians who helped revolutionize European art during the first decade of the 20th century. From 1909, many of the miriskusniki also contributed to the Ballets Russes...
. Later, he co-founded the Union of Russian Artists and the Association of Artists of Revolutionary Russia.

Yuon was born in Moscow to the family of a banking clerk of Swiss-Russian origin. His brother Paul Juon
Paul Juon
Paul Juon was a Germanised Russian composerHe was born in Moscow, where his father was an insurance official. His mother was German, and he went to a German school in Moscow. He entered the Moscow Conservatory in 1889, where he studied violin with Jan Hřímalý and composition with Anton Arensky...
was a notable composer.
From 1892 to 1898 he studied at the Moscow School of Painting, Sculpture and Architecture
Moscow School of Painting, Sculpture and Architecture
The Moscow School of Painting, Sculpture and Architecture was one of the largest educational institutions in Russia. The school was formed by the 1865 merger of a private art college, established in Moscow in 1832, and the Palace School of Architecture, established in 1749 by Dmitry Ukhtomsky. By...
where Konstantin Savitsky
Konstantin Savitsky
Konstantin Apollonovich Savitsky was a Russian realist painter born in the city of Taganrog in the village Frankovka or Baronovka, named after former governor Otto Pfeilizer-Frank. Today this area is occupied by Taganrog Iron and Steel Factory TAGMET....
and Konstantin Korovin
Konstantin Korovin
Konstantin Alekseyevich Korovin was a leading Russian Impressionist painter.-Biography:Konstantin was born in Moscow to a merchant family officially registered as "peasants of Vladimir Gubernia". His father, Aleksey Mikhailovich Korovin, earned a university degree and was more interested in arts...
were among his distinguished teachers. After graduating from the Moscow Art School he took private lessons from Valentin Serov
Valentin Serov
Valentin Alexandrovich Serov was a Russian painter, and one of the premier portrait artists of his era.-Youth and education:...
(1898–1900). During several trips to Western Europe, particularly in Paris
Paris
Paris is the capital and largest city in France, situated on the river Seine, in northern France, at the heart of the Île-de-France region...
, he became acquainted with the cityscapes of Camille Pissarro
Camille Pissarro
Camille Pissarro was a French Impressionist and Neo-Impressionist painter born on the island of St Thomas . His importance resides in his contributions to both Impressionism and Post-Impressionism, as he was the only artist to exhibit in both forms...
and other Impressionists, but retained his own distinctive style.
In 1900 he opened the first private painting and drawing school in Moscow. Later he taught in Leningrad Academy of Arts
Imperial Academy of Arts
The Russian Academy of Arts, informally known as the St. Petersburg Academy of Arts, was founded in 1757 by Ivan Shuvalov under the name Academy of the Three Noblest Arts. Catherine the Great renamed it the Imperial Academy of Arts and commissioned a new building, completed 25 years later in 1789...
and the Surikov Art Institute in Moscow.
His studio in Moscow was widely used by other painters. He designed sets for plays at the Moscow Art Theatre
Moscow Art Theatre
The Moscow Art Theatre is a theatre company in Moscow that the seminal Russian theatre practitioner Constantin Stanislavski, together with the playwright and director Vladimir Nemirovich-Danchenko, founded in 1898. It was conceived as a venue for naturalistic theatre, in contrast to the melodramas...
and the Maly Theater, becoming the official designer for this theater in 1945 - 1947. He also contributed sets for operas.

In the Soviet era, Yuon was the director of the Research Institute of the Academy of Arts (1948–1950) and the First Secretary of the Union of Soviet Artists (1956–1958). He won a Stalin Prize (1943), received the Order of Lenin
Order of Lenin
The Order of Lenin , named after the leader of the Russian October Revolution, was the highest decoration bestowed by the Soviet Union...
and other orders and medals. He died in Moscow on April 11, 1958. 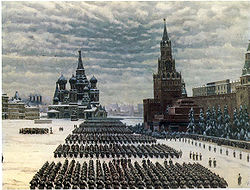 Konstantin Yuon started as an Impressionist landscape and genre painter with a Symbolist
Symbolism (arts)
Symbolism was a late nineteenth-century art movement of French, Russian and Belgian origin in poetry and other arts. In literature, the style had its beginnings with the publication Les Fleurs du mal by Charles Baudelaire...
note. The most Symbolist of his works are the cycle of engravings Creation of the World on the theme of Genesis (1908–1912) and the painting New Planet that shows the October Revolution
October Revolution
The October Revolution , also known as the Great October Socialist Revolution , Red October, the October Uprising or the Bolshevik Revolution, was a political revolution and a part of the Russian Revolution of 1917...
as a Cosmic Catastrophe.

Among the impressionist landscapes are The Tverskoy Boulevard and To the Trinity (both from 1903). Later he toyed with the ideas of lyrical landscape mixed with the imitations of Palekh miniature
Palekh miniature
Palekh miniature is a Russian folk handicraft of miniature painting, which is done with tempera paints on varnished articles made of papier-mâché ....
and Icon
Icon
An icon is a religious work of art, most commonly a painting, from Eastern Christianity and in certain Eastern Catholic churches...
arts. To the end of his life he became a strict social realism
Social realism
Social Realism, also known as Socio-Realism, is an artistic movement, expressed in the visual and other realist arts, which depicts social and racial injustice, economic hardship, through unvarnished pictures of life's struggles; often depicting working class activities as heroic...
artist, producing paintings like Parade on the Red Square
Red Square
Red Square is a city square in Moscow, Russia. The square separates the Kremlin, the former royal citadel and currently the official residence of the President of Russia, from a historic merchant quarter known as Kitai-gorod...
on November 7, 1941.