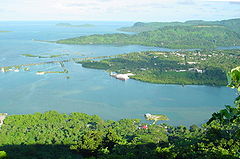 Kolonia Town lies on the north side of Pohnpei island. It was formerly part of Nett
Nett
Nett is one of the administrative divisions of Pohnpei State, Federated States of Micronesia.-Description:Nett is one of the six municipalities located in the main island of Pohnpei. It corresponds to the north-central sector of the island....
municipality, but is now a separate administrative district. The population of the town is 6,068 (2010). It is by far the largest population center on Pohnpei and the commercial center of the island. The land area of Kolonia amounts to 1.5 km², with a large number of buildings lying just outside the town limits.

Kolonia's history is deeply marked by Pohnpei's multiple foreign occupiers. Traditionally, Pohnpei's power center was in Madolenihmw
Madolenihmw
Madolenihmw is one of the administrative divisions of the Micronesian island of Pohnpei. It is located in the central east of the island, to the east of Mount Nahna Laud and south of Mount Kapwuriso. The coast of Madolenihmw includes a large bay which contains the island of Temwen, famous for its...
, on the southeastern part of the island. The area now known as Kolonia was called Mesenieng, which means "face of the wind" or "head wind." Spain
Spain
Spain , officially the Kingdom of Spain languages]] under the European Charter for Regional or Minority Languages. In each of these, Spain's official name is as follows:;;;;;;), is a country and member state of the European Union located in southwestern Europe on the Iberian Peninsula...
first built the town in 1887 as an administrative and military capital and named it Santiago de la Ascensión. A fort, from which ruins known as the Spanish Wall still remain, was built in order to protect the island's colonial government from German invasion and from local people.

In 1899, when Germany
Germany
Germany , officially the Federal Republic of Germany , is a federal parliamentary republic in Europe. The country consists of 16 states while the capital and largest city is Berlin. Germany covers an area of 357,021 km2 and has a largely temperate seasonal climate...
laid claim to Pohnpei along with the rest of the Caroline Islands
Caroline Islands
The Caroline Islands are a widely scattered archipelago of tiny islands in the western Pacific Ocean, to the north of New Guinea. Politically they are divided between the Federated States of Micronesia in the eastern part of the group, and Palau at the extreme western end...
, a few roads and buildings were erected, but the town remained relatively small. Few foreign settlers lived on the island at the time, although the German period did see Kolonia and much of the rest of Pohnpei leveled by a typhoon in 1905.

During World War II
World War II
World War II, or the Second World War , was a global conflict lasting from 1939 to 1945, involving most of the world's nations—including all of the great powers—eventually forming two opposing military alliances: the Allies and the Axis...
, virtually every building in Kolonia was destroyed as 118 tons of American
United States
The United States of America is a federal constitutional republic comprising fifty states and a federal district...
bombs and some 600 incendiaries rained on the town. Because Pohnpei was a bypassed island during World War II, U.S. troops never landed and there was no ground fighting. The town was slowly rebuilt during the American administration, which ended with the approval of the FSM Constitution by referendum in 1978. Building in various parts of town continues today.

Today, all of Kolonia's primary and secondary streets have been paved and street signs have been erected from one end of town to the other. Kolonia Town boasts grocery stores, restaurants, public and private schools, hotels, bars, and a variety of churches.

A number of foreign volunteer groups operate in Kolonia, including the Peace Corps
Peace Corps
The Peace Corps is an American volunteer program run by the United States Government, as well as a government agency of the same name. The mission of the Peace Corps includes three goals: providing technical assistance, helping people outside the United States to understand US culture, and helping...
, the Japan Overseas Cooperation Volunteers (JOCV or JICA
JICA
KF3 is a kart racing class for top drivers aged 12 to 15 .This class used to be called Junior Intercontinental A and has changed since January 2007 when CIK-FIA decided to replace the 100 cc air-cooled two-stroke engines with 125 cc Touch-and-Go water-cooled two-stroke...
), WorldTeach
WorldTeach
WorldTeach is a non-governmental organization that provides opportunities for individuals to make a meaningful contribution to international education by living and working as volunteer teachers in developing countries. Founded in 1986 by a group of Harvard University students, WorldTeach places...
, the Red Cross, the Jesuit Volunteer Corps
Jesuit Volunteer Corps
The Jesuit Volunteer Corps is an organization of lay volunteers who dedicate one year or more to voluntary community service working with people in need--the homeless, abused women and children, immigrants and refugees, the mentally ill, people with HIV/AIDS and other illnesses, the elderly,...
, the Conservation Society of Pohnpei (CSP), and Pacific Missionary Aviation (PMA)http://www.pmapacific.org.

Kolonia should not be confused with Colonia
Colonia, Yap
Colonia is the capital of the State of Yap, one of the Federated States of Micronesia. It administers both Yap proper and some 130 atolls reaching to the east and south for some 800 km . The 2010 population was 107,154 in both Colonia and ten other municipalities...
, which is the capital of FSM's Yap
Yap
Yap, also known as Wa'ab by locals, is an island in the Caroline Islands of the western Pacific Ocean. It is a state of the Federated States of Micronesia. Yap's indigenous cultures and traditions are still strong compared to other neighboring islands. The island of Yap actually consists of four...
State.
The source of this article is wikipedia, the free encyclopedia.  The text of this article is licensed under the GFDL.