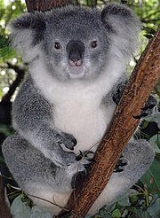 Overview
The koala is an arboreal herbivorous
Herbivore
Herbivores are organisms that are anatomically and physiologically adapted to eat plant-based foods. Herbivory is a form of consumption in which an organism principally eats autotrophs such as plants, algae and photosynthesizing bacteria. More generally, organisms that feed on autotrophs in...
marsupial
Marsupial
Marsupials are an infraclass of mammals, characterized by giving birth to relatively undeveloped young. Close to 70% of the 334 extant species occur in Australia, New Guinea, and nearby islands, with the remaining 100 found in the Americas, primarily in South America, but with thirteen in Central...
native to Australia, and the only extant representative of the family
Family (biology)
In biological classification, family is* a taxonomic rank. Other well-known ranks are life, domain, kingdom, phylum, class, order, genus, and species, with family fitting between order and genus. As for the other well-known ranks, there is the option of an immediately lower rank, indicated by the...
Phascolarctidae
Phascolarctidae
Phascolarctidae is a family of marsupials of the order Diprotodontia, consisting of only one extant species, the Koala, six well known fossil species, with another 5 less well known fossil species, and 2 fossil species whose taxonomy is debatable but is put in this group...
.

The koala is found in coastal regions of eastern and southern Australia, from Adelaide
Adelaide
Adelaide is the capital city of South Australia and the fifth-largest city in Australia. Adelaide has an estimated population of more than 1.2 million...
to the southern part of Cape York Peninsula
Cape York Peninsula
Cape York Peninsula is a large remote peninsula located in Far North Queensland at the tip of the state of Queensland, Australia, the largest unspoilt wilderness in northern Australia and one of the last remaining wilderness areas on Earth...
. Populations also extend for considerable distances inland in regions with enough moisture to support suitable woodland
Woodland
Ecologically, a woodland is a low-density forest forming open habitats with plenty of sunlight and limited shade. Woodlands may support an understory of shrubs and herbaceous plants including grasses. Woodland may form a transition to shrubland under drier conditions or during early stages of...
s. The koalas of South Australia were largely exterminated during the early part of the 20th century, but the state has since been repopulated with Victorian
Victoria (Australia)
Victoria is the second most populous state in Australia. Geographically the smallest mainland state, Victoria is bordered by New South Wales, South Australia, and Tasmania on Boundary Islet to the north, west and south respectively....
stock.

How does the organ system of a koala work

What is the Koalas circulatory system? (Please Answer)

Description of the koala's nervous system

Do koalas have a circulatory,respiratory.or nervous syestem

What is a koala's closest extinct animal?
More