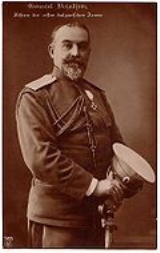 Encyclopedia
Kliment Boyadzhiev was a Bulgarian
Bulgarians
The Bulgarians are a South Slavic nation and ethnic group native to Bulgaria and neighbouring regions. Emigration has resulted in immigrant communities in a number of other countries.-History and ethnogenesis:...
General during the Balkan Wars
Balkan Wars
The Balkan Wars were two conflicts that took place in the Balkans in south-eastern Europe in 1912 and 1913.By the early 20th century, Montenegro, Bulgaria, Greece and Serbia, the countries of the Balkan League, had achieved their independence from the Ottoman Empire, but large parts of their ethnic...
and First World War.

Born in Ohrid
Ohrid
Ohrid is a city on the eastern shore of Lake Ohrid in the Republic of Macedonia. It has about 42,000 inhabitants, making it the seventh largest city in the country. The city is the seat of Ohrid Municipality. Ohrid is notable for having once had 365 churches, one for each day of the year and has...
, he studied in an elementary school there. After the liberation of Bulgaria
Bulgaria
Bulgaria , officially the Republic of Bulgaria , is a parliamentary democracy within a unitary constitutional republic in Southeast Europe. The country borders Romania to the north, Serbia and Macedonia to the west, Greece and Turkey to the south, as well as the Black Sea to the east...
in 1878 he emigrated to Sofia. In 1883 he graduated the Military School in Sofia and in 1895 graduated the Military Academy in Torino, Italy
Italy
Italy , officially the Italian Republic languages]] under the European Charter for Regional or Minority Languages. In each of these, Italy's official name is as follows:;;;;;;;;), is a unitary parliamentary republic in South-Central Europe. To the north it borders France, Switzerland, Austria and...
with excellent marks.

During the successful Serbo-Bulgarian War
Serbo-Bulgarian War
The Serbo-Bulgarian War was a war between Serbia and Bulgaria that erupted on 14 November 1885 and lasted until 28 November the same year. Final peace was signed on 19 February 1886 in Bucharest...
in 1885 he was an aid-de-camp in the Western Corps quarters. He distinguished himself in the battle of Lule Burgas during the First Balkan War
First Balkan War
The First Balkan War, which lasted from October 1912 to May 1913, pitted the Balkan League against the Ottoman Empire. The combined armies of the Balkan states overcame the numerically inferior and strategically disadvantaged Ottoman armies and achieved rapid success...
as a commander of the Fourth Preslav Infantry Division. Between 22 August 1913 and 1 September 1913 Kliment Boyadzhiev was the Minister of War.

During the First World War he commanded the 1st Army which achieved major successes against the Serbs
Serbs
The Serbs are a South Slavic ethnic group of the Balkans and southern Central Europe. Serbs are located mainly in Serbia, Montenegro and Bosnia and Herzegovina, and form a sizable minority in Croatia, the Republic of Macedonia and Slovenia. Likewise, Serbs are an officially recognized minority in...
in the battle of Morava
Battle of Morava
The Morava Offensive Operation was undertaken by the Bulgarian First Army between 14 October 1915 and 9 November 1915 as part of the strategic offensive operation of Army Group Mackensen against Serbia in 1915. Under the command of Lieutenant General Kliment Boyadzhiev the Bulgarians seized the...
and the battle of Kosovo
Battle of Kosovo (1915)
The Kosovo Offensive Operation , the third major battle in history to have been fought there, occurred between 10 November 1915 and 4 December 1915.-Battle and Serbian defeat:...
. Boyadzhiev remained in that position until 25 September 1916 when he went to the reserve. The general was awarded four Bulgarian medals for courage and bravery as well as one Russia
Russia
Russia or , officially known as both Russia and the Russian Federation , is a country in northern Eurasia. It is a federal semi-presidential republic, comprising 83 federal subjects...
n. After the war between 1918 and 1923 he emigrated to Germany
Germany
Germany , officially the Federal Republic of Germany , is a federal parliamentary republic in Europe. The country consists of 16 states while the capital and largest city is Berlin. Germany covers an area of 357,021 km2 and has a largely temperate seasonal climate...
.

He was also an author of a relief map of Bulgaria in 1902.