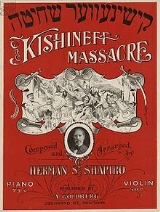 This article is part of the History of the Jews in Bessarabia. 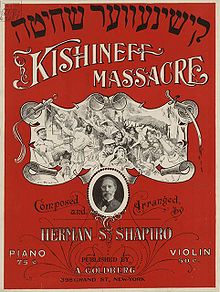 The Kishinev pogrom was an anti-Jewish riot
Riot
A riot is a form of civil disorder characterized often by what is thought of as disorganized groups lashing out in a sudden and intense rash of violence against authority, property or people. While individuals may attempt to lead or control a riot, riots are thought to be typically chaotic and...
that took place in Chişinău
Chisinau
Chișinău is the capital and largest municipality of Moldova. It is also its main industrial and commercial centre and is located in the middle of the country, on the river Bîc...
, then the capital of the Bessarabia
Bessarabia
Bessarabia is a historical term for the geographic region in Eastern Europe bounded by the Dniester River on the east and the Prut River on the west....
province of the Russian Empire
Russian Empire
The Russian Empire was a state that existed from 1721 until the Russian Revolution of 1917. It was the successor to the Tsardom of Russia and the predecessor of the Soviet Union...
(now the capital of Moldova
Moldova
Moldova , officially the Republic of Moldova is a landlocked state in Eastern Europe, located between Romania to the West and Ukraine to the North, East and South. It declared itself an independent state with the same boundaries as the preceding Moldavian Soviet Socialist Republic in 1991, as part...
) on April 6-7, 1903.

The riot started after an incident on April 6 when a Christian
Christian
A Christian is a person who adheres to Christianity, an Abrahamic, monotheistic religion based on the life and teachings of Jesus of Nazareth as recorded in the Canonical gospels and the letters of the New Testament...
Ukrainian
Ukrainians
Ukrainians are an East Slavic ethnic group native to Ukraine, which is the sixth-largest nation in Europe. The Constitution of Ukraine applies the term 'Ukrainians' to all its citizens...
boy, Mikhail Rybachenko, was found murdered in the town of Dubossary, about 25 miles north of Kishinev. Although it was clear that the boy had been murdered by a relative (who was later found), the Russian-language anti-Semitic newspaper Бессарабец (Bessarabetz, meaning "Bessarabia
Bessarabia
Bessarabia is a historical term for the geographic region in Eastern Europe bounded by the Dniester River on the east and the Prut River on the west....
n"), published by Pavel Krushevan
Pavel Krushevan
Pavel Aleksandrovich Krushevan was a journalist, editor, publisher and an official in the Imperial Russia. He was an active Black Hundredist and was known for his far-right, ultra-nationalist and openly antisemitic views and was the first publisher of The Protocols of the Elders of Zion.Born...
, insinuated that he was murdered by the Jews. Another newspaper, Свет (Svet, "Light"), used the ages-old blood libel against the Jews (alleging that the boy had been killed to use his blood in preparation of matzo
Matzo
Matzo or matzah is an unleavened bread traditionally eaten by Jews during the week-long Passover holiday, when eating chametz—bread and other food which is made with leavened grain—is forbidden according to Jewish law. Currently, the most ubiquitous type of Matzo is the traditional Ashkenazic...
).

The Kishinev pogrom
Pogrom
A pogrom is a form of violent riot, a mob attack directed against a minority group, and characterized by killings and destruction of their homes and properties, businesses, and religious centres...
spanned three days of rioting against the Jews. Forty-seven (some put the figure at 49) Jews were killed, 92 severely wounded, 500 slightly wounded and over 700 houses and many businesses looted and destroyed. The Times
The Times
The Times is a British daily national newspaper, first published in London in 1785 under the title The Daily Universal Register . The Times and its sister paper The Sunday Times are published by Times Newspapers Limited, a subsidiary since 1981 of News International...
published a forged
Forgery
Forgery is the process of making, adapting, or imitating objects, statistics, or documents with the intent to deceive. Copies, studio replicas, and reproductions are not considered forgeries, though they may later become forgeries through knowing and willful misrepresentations. Forging money or...
dispatch by Vyacheslav von Plehve
Vyacheslav von Plehve
Vyacheslav Konstantinovich von Plehve , also Pléhve, or Pleve was the director of Imperial Russia's police and later Minister of the Interior.- Biography :...
, the Minister of Interior, to the governor of Bessarabia, which supposedly gave orders not to stop the rioters, but, in any case, no attempt was made by the police or military to intervene to stop the riots until the third day. This non-intervention is an argument in support of the opinion that the pogrom was sponsored or, at least, tolerated by the state.

The anti-Jewish riots in Kishinev, Bessarabia, are worse than the censor will permit to publish. There was a well laid-out plan for the general massacre of Jews on the day following the Russian Easter. The mob was led by priests, and the general cry, "Kill the Jews," was taken- up all over the city. The Jews were taken wholly unaware and were slaughtered like sheep. The dead number 120 and the injured about 500. The scenes of horror attending this massacre are beyond description. Babes were literally torn to pieces by the frenzied and bloodthirsty mob. The local police made no attempt to check the reign of terror. At sunset the streets were piled with corpses and wounded. Those who could make their escape fled in terror, and the city is now practically deserted of Jews.


The Kishinev Pogrom captured the attention of the world community and was mentioned in the Roosevelt Corollary to the Monroe Doctrine
Roosevelt Corollary
-Background:In late 1902, Britain, Germany, and Italy implemented a naval blockade of several months against Venezuela because of President Cipriano Castro's refusal to pay foreign debts and damages suffered by European citizens in a recent Venezuelan civil war. The incident was called the...
as an example of the type of human rights abuse which would justify United States involvement in Latin America. 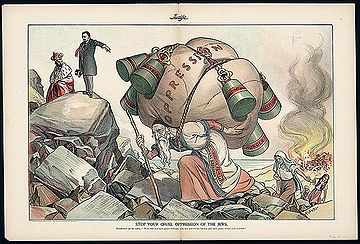 A second pogrom
Pogrom
A pogrom is a form of violent riot, a mob attack directed against a minority group, and characterized by killings and destruction of their homes and properties, businesses, and religious centres...
took place on October 19-20, 1905. This time the riots began as political protests against the Tsar
Tsar
Tsar is a title used to designate certain European Slavic monarchs or supreme rulers. As a system of government in the Tsardom of Russia and Russian Empire, it is known as Tsarist autocracy, or Tsarism...
, but turned into an attack on Jews wherever they could be found. By the time the riots were over, 19 Jews were killed and 56 were injured. Jewish self-defense leagues, organized after the first pogrom, stopped some of the violence, but were not wholly successful.

This Pogrom was a part of a much larger movement of 600 pogroms that swept the Russian Empire after the October Manifesto of 1905.


Results of the pogroms 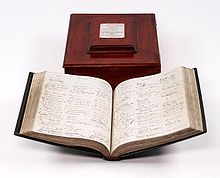 Despite a world outcry, only two men were sentenced to seven and five years and twenty-two were sentenced for one or two years. This pogrom was instrumental in convincing tens of thousands of Russian Jews to leave to the West
Western world
The Western world, also known as the West and the Occident , is a term referring to the countries of Western Europe , the countries of the Americas, as well all countries of Northern and Central Europe, Australia and New Zealand...
and eventually to the land of Israel
Land of Israel
The Land of Israel is the Biblical name for the territory roughly corresponding to the area encompassed by the Southern Levant, also known as Canaan and Palestine, Promised Land and Holy Land. The belief that the area is a God-given homeland of the Jewish people is based on the narrative of the...
.

As such, it became a rallying point for early Zionists
Zionism
Zionism is a Jewish political movement that, in its broadest sense, has supported the self-determination of the Jewish people in a sovereign Jewish national homeland. Since the establishment of the State of Israel, the Zionist movement continues primarily to advocate on behalf of the Jewish state...
, especially what would become Revisionist Zionism
Revisionist Zionism
Revisionist Zionism is a nationalist faction within the Zionist movement. It is the founding ideology of the non-religious right in Israel, and was the chief ideological competitor to the dominant socialist Labor Zionism...
, inspiring early self-defense leagues under leaders like Vladimir Jabotinsky.

A large number of artists and writers addressed the pogrom. Russian authors such as Vladimir Korolenko
Vladimir Korolenko
Vladimir Galaktionovich Korolenko was a Ukrainian-Russian short story writer, journalist, human rights activist and humanitarian. His short stories were known for their harsh description of nature based on his experience of exile in Siberia...
wrote about the pogrom in House 13, while Tolstoy
Leo Tolstoy
Lev Nikolayevich Tolstoy was a Russian writer who primarily wrote novels and short stories. Later in life, he also wrote plays and essays. His two most famous works, the novels War and Peace and Anna Karenina, are acknowledged as two of the greatest novels of all time and a pinnacle of realist...
and Gorky
Maxim Gorky
Alexei Maximovich Peshkov , primarily known as Maxim Gorky , was a Russian and Soviet author, a founder of the Socialist Realism literary method and a political activist.-Early years:...
wrote condemnations blaming the Russian government — a change from the earlier pogroms of the 1880s, when most members of the Russian intelligentsia were silent. It also had a major impact on Jewish art and literature. Playwright Max Sparber took the Kishinev pogrom as the subject for one of his earliest plays. Poet Chaim Bialik wrote "In the City of Slaughter," about the perceived passivity of the Jews in the face of the mobs:

...the heirs
Of Hasmoneans lay, with trembling knees,
Concealed and cowering—the sons of the Maccabees!
The seed of saints, the scions of the lions!
Who, crammed by scores in all the sanctuaries of their shame,
So sanctified My name!
It was the flight of mice they fled,
The scurrying of roaches was their flight;
They died like dogs, and they were dead!