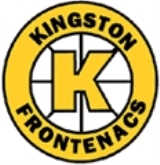 The Kingston Frontenacs of the Eastern Professional Hockey League (EPHL) were a minor league professional ice hockey
Ice hockey
Ice hockey, often referred to as hockey, is a team sport played on ice, in which skaters use wooden or composite sticks to shoot a hard rubber puck into their opponent's net. The game is played between two teams of six players each. Five members of each team skate up and down the ice trying to take...
team affiliated with the NHL's Boston Bruins
Boston Bruins
The Boston Bruins are a professional ice hockey team based in Boston, Massachusetts, USA. They are members of the Northeast Division of the Eastern Conference of the National Hockey League . The team has been in existence since 1924, and is the league's third-oldest team and its oldest in the...
.

The team was based in Kingston, Ontario
Kingston, Ontario
Kingston, Ontario is a Canadian city located in Eastern Ontario where the St. Lawrence River flows out of Lake Ontario. Originally a First Nations settlement called "Katarowki," , growing European exploration in the 17th Century made it an important trading post...
, and played home games at the Kingston Memorial Centre
Kingston Memorial Centre
The Kingston Memorial Centre is a 3,300-seat multi-purpose arena in Kingston, Ontario, Canada. It was built in 1950. The Memorial Centre has a large ice pad, outdoor pool, softball diamonds and a cinder track, and was the home to the Kingston Frontenacs ice hockey team from 1973-2008...
. The Frontenacs existed from 1959 until 1963, winning the EPHL regular season championship in 1962-63. The Frontenacs played in all four EPHL seasons, and were among the most stable of the league's franchises. When the EPHL folded in 1963, the franchise was transferred to the new Central Hockey League as the Minneapolis Bruins
Minneapolis Bruins
The Minneapolis Bruins were a minor league professional ice hockey team in the Central Hockey League from 1963 to 1965. Minneapolis operated as a farm team to the National Hockey League's Boston Bruins. The team originated as the Kingston Frontenacs of the Eastern Professional Hockey League, which...
.

Orval Tessier
Orval Tessier
Orval Roy Tessier is a retired Canadian professional ice hockey centre and coach who played three seasons in the National Hockey League for the Montreal Canadiens and Boston Bruins. Tessier played only 59 regular season games in the NHL...
won two scoring titles with the Frontenacs, and voted the league's most valuable player
Most Valuable Player
In sports, a Most Valuable Player award is an honor typically bestowed upon the best performing player or players on a specific team, in an entire league, or for a particular contest or series of contests...
and most sportsmanlike
Sportsmanship
Sportsmanship is an aspiration or ethos that a sport or activity will be enjoyed for its own sake, with proper consideration for fairness, ethics, respect, and a sense of fellowship with one's competitors...
player in the 1961-62 season.