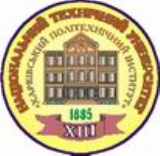 Encyclopedia
The Kharkiv Polytechnic Institute National Technical University (NTU "KhPI") (), in the city of Kharkiv
Kharkiv
Kharkiv or Kharkov is the second-largest city in Ukraine.The city was founded in 1654 and was a major centre of Ukrainian culture in the Russian Empire. Kharkiv became the first city in Ukraine where the Ukrainian Soviet Socialist Republic was proclaimed in December 1917 and Soviet government was...
, is the largest and oldest technical university in eastern Ukraine
Ukraine
Ukraine is a country in Eastern Europe. It has an area of 603,628 km², making it the second largest contiguous country on the European continent, after Russia...
. Founded in 1885, it is the second-oldest technical university in the Russian Empire
Russian Empire
The Russian Empire was a state that existed from 1721 until the Russian Revolution of 1917. It was the successor to the Tsardom of Russia and the predecessor of the Soviet Union...
(after Saint Petersburg State Institute of Technology
Saint Petersburg State Institute of Technology
Saint Petersburg State Institute of Technology is one of the oldest institutions of higher education in Russia , it currently trains around 5000 students.-History:...
) and in the territory of modern Ukraine (after Lviv Polytechnic
Lviv Polytechnic
Lviv Polytechnic National University is the largest scientific university in Lviv. Since its foundation in 1844, it was one of the most important centres of science and technological development in Central Europe. In the interbellum period, the Polytechnic was one of the most important technical...
).

The university was established according to the program for technical education in the Russian Empire set up by Dmitry Mendeleev as a Practical Technological Institute, with two departments (mechanical and chemical) which could offer training to 125 students. The organizer and first rector of the institute was Viktor Kyrpychov
Viktor Kyrpychov
Viktor Kyrpychov was a prominent Russian and Ukrainian engineer, physicist, and educational organizer, known especially for his work on applied and structural mechanics as well as for establishing the foundations for technical education in the Russian Empire....
, an honored professor specializing in mechanics and resistance in materials. In 1898, the institute was renamed the Emperor Alexander III
Alexander III of Russia
Alexander Alexandrovich Romanov , historically remembered as Alexander III or Alexander the Peacemaker reigned as Emperor of Russia from until his death on .-Disposition:...
Techological Institute. After the October Revolution
October Revolution
The October Revolution , also known as the Great October Socialist Revolution , Red October, the October Uprising or the Bolshevik Revolution, was a political revolution and a part of the Russian Revolution of 1917...
in 1917, the Technological Institute continued its work. In 1921 the institute set up the first department for workers (rabfak)
Rabfak
Rabfak was the Workers' Faculty in the Soviet Union. It prepared Soviet workers to enter institutions of higher education....
in Ukraine, and in 1923 (at the request of students, teachers and employees) the institute was renamed for Vladimir Lenin. In 1929 the V.I. Lenin institute of Technology was renamed the Kharkiv V.I. Lenin Polytechnic Institute (KhPI), a name kept until the fall of the Soviet Union.

In 1930, five independent higher-educational institutions (for mechanical machine-engineering, electrical technology, chemical technology, engineering and construction, and aviation) were set up as five separate departments of the institute. KhPI, as a whole, temporarily ceased to exist after that but historians consider these five institutions as informal branches sharing a common history. During World War II
World War II
World War II, or the Second World War , was a global conflict lasting from 1939 to 1945, involving most of the world's nations—including all of the great powers—eventually forming two opposing military alliances: the Allies and the Axis...
over 3,000 professors, students and institute employees joined the Army. Evacuated to Krasnoufimsk
Krasnoufimsk
Krasnoufimsk is a town in Sverdlovsk Oblast, Russia, located on the Ufa River , from Yekaterinburg. It serves as the administrative center of Krasnoufimsky District, although it is not administratively a part of it...
and Chirchiq
Chirchiq
Chirchiq also spelled as Chirchik is a city in Toshkent Province, Uzbekistan, about 32 km northeast of Tashkent, along the Chirciq River...
, the institute continued training engineering staff; it also solved serious scientific problems related to strengthening national defense (such as contributing to tank-design work spearheaded by Alexander Morozov
Alexander Alexandrovich Morozov
Olexandr Oleksandrovych Morozov was a Soviet engineer and tank designer.A graduate from the Moscow Mechanical Institute, in 1928 Morozov started work at a new design bureau headed by I. Aleksiyenko, at the Kharkiv Locomotive Factory of Kharkiv, Ukraine. Here he contributed to the lacklustre T-12...
, one of the key engineers in T-34
T-34
The T-34 was a Soviet medium tank produced from 1940 to 1958. Although its armour and armament were surpassed by later tanks of the era, it has been often credited as the most effective, efficient and influential design of World War II...
design). In 1949 four higher-educational institutions (the institutes for mechanical machine-engineering, chemical technology, electrical technology and the institute of the cement industry) were reunited into the Kharkiv V.I.Lenin Polytechnic Institute. Professor Mikhail Semko was appointed its rector, and remained in this position for 30 years.

After the fall of the Soviet Union in 1991, KhPI continued its work as a Ukrainian institution of higher learning. In April 1994, the Cabinet of Ministers of Ukraine
Cabinet of Ministers of Ukraine
The Cabinet of Ukraine is the highest body of state executive power in Ukraine also referred to as the Government of Ukraine...
granted Kharkiv Polytechnic Institute university status and it was renamed the Kharkiv State Polytechnic University (KhSPU). In September 2000, the status of National Technical University has been given to KhSPU, by decree of the President of Ukraine
President of Ukraine
Prior to the formation of the modern Ukrainian presidency, the previous Ukrainian head of state office was officially established in exile by Andriy Livytskyi. At first the de facto leader of nation was the president of the Central Rada at early years of the Ukrainian People's Republic, while the...
; since then, it has had its current name (NTU "KhPI"). In February 2010, NTU "KhPI" was granted the status of Autonomous Research National University by decree of the Ukrainian Cabinet of Ministers.

NTU "KhPI" has been accredited as a university of the highest (IV) level. It trains full-time students in 91 fields and offers 69 fields for instruction by correspondence
Distance education
Distance education or distance learning is a field of education that focuses on teaching methods and technology with the aim of delivering teaching, often on an individual basis, to students who are not physically present in a traditional educational setting such as a classroom...
. It has the greatest number of matriculated students in eastern and southern Ukraine (4,377 places for full-time students and over 4,000 places for correspondence students). The university has 21 full-time departments, departments for correspondence and new full-time students, a center for foreign students, an inter-branch institute for advanced studies and three research and design institutes. It prepares specialists in the fields of machine-building, automation, electrical engineering
Electrical engineering
Electrical engineering is a field of engineering that generally deals with the study and application of electricity, electronics and electromagnetism. The field first became an identifiable occupation in the late nineteenth century after commercialization of the electric telegraph and electrical...
, electronics, chemical engineering
Chemical engineering
Chemical engineering is the branch of engineering that deals with physical science , and life sciences with mathematics and economics, to the process of converting raw materials or chemicals into more useful or valuable forms...
, control systems, management
Management
Management in all business and organizational activities is the act of getting people together to accomplish desired goals and objectives using available resources efficiently and effectively...
, computer science
Computer science
Computer science or computing science is the study of the theoretical foundations of information and computation and of practical techniques for their implementation and application in computer systems...
, software engineering
Software engineering
Software Engineering is the application of a systematic, disciplined, quantifiable approach to the development, operation, and maintenance of software, and the study of these approaches; that is, the application of engineering to software...
and business.

The University is unique among other Kharkiv educational institutions, as it occupies the same campus that was initially given to it at its foundation in 1885 (the area was formerly called "Technological Garden", after the former name of the university).

Several campus buildings remain intact from the 19th century and may be considered historically significant as samples of past campus architecture:
In addition, these modern facilities were established during the Soviet era:

The institute has a contemporary sports complex, allowing for more than 30 types of sports and activities; this allows for active involvement in sports for students and faculty. Among thousands of active sportsmen in NTU "KhPI" are Olympic and world champions, winners of international and national competitions, including Т. Artemenko, I. Moskaltsov, V. Homutov (mountaineering), Aleksei Barkalov (water polo, two gold Olympic medals in 1972
Water polo at the 1972 Summer Olympics
Final results for the water polo competition at the 1972 Summer Olympics held in Munich.-Medalists:- Pool A :-Pool B:-Pool C:- Group II :Results taken from Preliminary Round...
and 1980
Water polo at the 1980 Summer Olympics
Water polo at the 1980 Summer Olympics as usual was a part of the swimming sport, other two parts were swimming and diving. They were not three separate sports, because they all were governed by one federation — FINA. Water Polo discipline consisted of one event: men's team.In the preliminary...
), G. Gafanovich (volleyball), Dmitrii Bezkorovaynyi, Ruslan Babaev (arm wrestling
Arm wrestling
Arm wrestling is a sport with two participants. Each participant places one arm on a surface with their elbows bent and touching the surface, and they grip each other's hand...
), I. Kaydash, L. Tkachenko-Garkavaya (track and field), N. Yesipenko (badminton), I. Kyrychenko (cycling), Igor Tselovalnikov (cycling, gold Olympic medal in 1972
Cycling at the 1972 Summer Olympics - Men's tandem
These are the official results of the Men's Tandem Race at the 1972 Summer Olympics in Munich, West Germany held on September 3 and September 4, 1972. There were a total number of fourteen couples participating.-Final classification:-References:*...
), I. Raevskyy and D. Slatyn (basketball).
2004 Summer Olympics
2004 Summer Olympics
The 2004 Summer Olympic Games, officially known as the Games of the XXVIII Olympiad, was a premier international multi-sport event held in Athens, Greece from August 13 to August 29, 2004 with the motto Welcome Home. 10,625 athletes competed, some 600 more than expected, accompanied by 5,501 team...
participants
Ukraine at the 2004 Summer Olympics
-Gold:*Yuriy Bilonoh — Athletics, Men's Shot Put*Valeriy Goncharov — Gymnastics, Men's Parallel Bars*Yuriy Nikitin — Gymnastics, Men's Trampoline Individual*Olena Kostevych — Shooting, Women's 10m Air Pistol...
from NTU "KhPI":

2008 Summer Olympics
2008 Summer Olympics
The 2008 Summer Olympics, officially known as the Games of the XXIX Olympiad, was a major international multi-sport event that took place in Beijing, China, from August 8 to August 24, 2008. A total of 11,028 athletes from 204 National Olympic Committees competed in 28 sports and 302 events...
participants
Ukraine at the 2008 Summer Olympics
-Medalists:- Archery:Ukraine's men's archery team took seventh place at the 2007 World Outdoor Target Championships, earning the nation a full complement of three qualification spots for the Olympic men's competitions. The women's team finished in tenth place, six points shy of qualifying as well...
from NTU "KhPI":