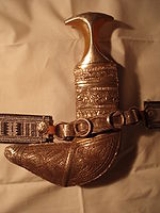 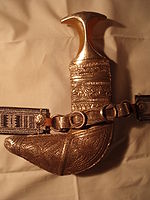 The khanjar is the traditional dagger
Dagger
A dagger is a fighting knife with a sharp point designed or capable of being used as a thrusting or stabbing weapon. The design dates to human prehistory, and daggers have been used throughout human experience to the modern day in close combat confrontations...
of Oman
Oman
Oman , officially called the Sultanate of Oman , is an Arab state in southwest Asia on the southeast coast of the Arabian Peninsula. It is bordered by the United Arab Emirates to the northwest, Saudi Arabia to the west, and Yemen to the southwest. The coast is formed by the Arabian Sea on the...
. It is similar to the Yemeni jambiya
Jambiya
Janbiya, also spelt janbia, jambiya, and jambia, , is the Arabic term for dagger, but it is generally used to describe a specific type of dagger with a short curved blade that is worn on a belt. Although the term jambiya is also used in other Arab countries, it is mostly associated with people of...
.

The khanjar is curved and sharpened on both edges. It is carried in a sheath
Sheath
Sheath may refer to:* Scabbard, a sheath for holding a sword, knife, or other large blade, as well as guns, such as rifles.* The outer covering of a cable* Condom, a kind of contraception* Debye sheath, a layer of a plasma in physics...
decorated in silver
Silver
Silver is a metallic chemical element with the chemical symbol Ag and atomic number 47. A soft, white, lustrous transition metal, it has the highest electrical conductivity of any element and the highest thermal conductivity of any metal...
, on a belt similarly decorated in silver filigree
Filigree
Filigree is a delicate kind of jewellery metalwork made with twisted threads usually of gold and silver or stitching of the same curving motifs. It often suggests lace, and in recent centuries remains popular in Indian and other Asian metalwork, and French from 1660 to the late 19th century...
.

There are many uses of the Khanjar it is a symbolic weapon and worn by men after puberty. Nowadays it is used as a type of formal dress code and stylistic purposes. The release of the Khanjar from its sheath before the 1970s was considered a social taboo and men would only do that if they sought revenge or assassination.

The Khanjar can be found anywhere from Egypt
Egypt
Egypt , officially the Arab Republic of Egypt, Arabic: , is a country mainly in North Africa, with the Sinai Peninsula forming a land bridge in Southwest Asia. Egypt is thus a transcontinental country, and a major power in Africa, the Mediterranean Basin, the Middle East and the Muslim world...
to Iran
Iran
Iran , officially the Islamic Republic of Iran , is a country in Southern and Western Asia. The name "Iran" has been in use natively since the Sassanian era and came into use internationally in 1935, before which the country was known to the Western world as Persia...
under the same name.