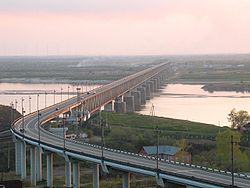 Khabarovsk Bridge is a road and rail bridge built in 1999. It crosses the Amur River in eastern Russia
Russia
Russia or , officially known as both Russia and the Russian Federation , is a country in northern Eurasia. It is a federal semi-presidential republic, comprising 83 federal subjects...
, and connects the urban-type settlement
Urban-type settlement
Urban-type settlement ; , selyshche mis'koho typu ) is an official designation for a type of locality used in some of the countries of the former Soviet Union...
of Imeni Telmana in the Jewish Autonomous Oblast
Jewish Autonomous Oblast
The Jewish Autonomous Oblast is a federal subject of Russia situated in the Russian Far East, bordering Khabarovsk Krai and Amur Oblast of Russia and Heilongjiang province of China. Its administrative center is the town of Birobidzhan....
, and city of Khabarovsk
Khabarovsk
Khabarovsk is the largest city and the administrative center of Khabarovsk Krai, Russia. It is located some from the Chinese border. It is the second largest city in the Russian Far East, after Vladivostok. The city became the administrative center of the Far Eastern Federal District of Russia...
in the Khabarovsk Krai
Khabarovsk Krai
Khabarovsk Krai is a federal subject of Russia , located in the Russian Far East. It lies mostly in the basin of the lower Amur River, but also occupies a vast mountainous area along the coastline of the Sea of Okhotsk, an arm of the Pacific Ocean. The administrative center of the krai is the...
. Until that time an older bridge built 1916 existed near it.

The Khabarovsk Bridge (1916) was a railway bridge
Bridge
A bridge is a structure built to span physical obstacles such as a body of water, valley, or road, for the purpose of providing passage over the obstacle...
that carried the Trans-Siberian Railway
Trans-Siberian Railway
The Trans-Siberian Railway is a network of railways connecting Moscow with the Russian Far East and the Sea of Japan. It is the longest railway in the world...
across the Amur River near the city of Khabarovsk
Khabarovsk
Khabarovsk is the largest city and the administrative center of Khabarovsk Krai, Russia. It is located some from the Chinese border. It is the second largest city in the Russian Far East, after Vladivostok. The city became the administrative center of the Far Eastern Federal District of Russia...
, Russia
Russia
Russia or , officially known as both Russia and the Russian Federation , is a country in northern Eurasia. It is a federal semi-presidential republic, comprising 83 federal subjects...
. Measuring some 2,590 meters (about 8,500 feet) in length, the structure remained the longest bridge in Imperial Russia, Soviet Union
Soviet Union
The Soviet Union , officially the Union of Soviet Socialist Republics , was a constitutionally socialist state that existed in Eurasia between 1922 and 1991....
and Asia
Asia
Asia is the world's largest and most populous continent, located primarily in the eastern and northern hemispheres. It covers 8.7% of the Earth's total surface area and with approximately 3.879 billion people, it hosts 60% of the world's current human population...
for decades.

The bridge was scheduled to be constructed at a cost of 13,500,000 Russian ruble
Russian ruble
The ruble or rouble is the currency of the Russian Federation and the two partially recognized republics of Abkhazia and South Ossetia. Formerly, the ruble was also the currency of the Russian Empire and the Soviet Union prior to their breakups. Belarus and Transnistria also use currencies with...
s to designs by the eminent bridge builder Lavr Proskuryakov
Lavr Proskuryakov
Lavr Dmitrievich Proskuryakov was a leading bridge builder of Imperial Russia.Proskuryakov was responsible for many bridges constructed along the Trans-Siberian Railway, including the one crossing the Kotorosl River in Yaroslavl , another spanning the Yenisey near Krasnoyarsk and the Khabarovsk...
in merely 26 months. However, a year after construction work began on July 30, 1913 the First World War
World War I
World War I , which was predominantly called the World War or the Great War from its occurrence until 1939, and the First World War or World War I thereafter, was a major war centred in Europe that began on 28 July 1914 and lasted until 11 November 1918...
broke out. Since the bridge spans were manufactured in Warsaw
Warsaw
Warsaw is the capital and largest city of Poland. It is located on the Vistula River, roughly from the Baltic Sea and from the Carpathian Mountains. Its population in 2010 was estimated at 1,716,855 residents with a greater metropolitan area of 2,631,902 residents, making Warsaw the 10th most...
, they had to be brought to Khabarovsk by sea all the way around Eurasia - in fall of 1914, a merchant ship carrying the last two spans was sunk in the Indian Ocean
Indian Ocean
The Indian Ocean is the third largest of the world's oceanic divisions, covering approximately 20% of the water on the Earth's surface. It is bounded on the north by the Indian Subcontinent and Arabian Peninsula ; on the west by eastern Africa; on the east by Indochina, the Sunda Islands, and...
by the German cruiser Emden delaying the completion of the bridge by more than a year. The bridge was finally completed for an official opening on October 5, 1916. It was named Alekseyevsky after Tsesarevich Alexis
Tsesarevich Alexis
Tsesarevich Alexis may refer to Alexis Petrovich , son and heir apparent of Peter the Great; or Alexis Nikolaevich , son and heir apparent of Nicholas II of Russia....
.

In 1999 a new bridge was built right next to the old one, carrying automobile and rail traffic on two levels. It is 3,890 m long. The original spans of the old bridge were dismantled in the 21st century, though its supports remain. The reconstructed Khabarovsk Bridge is depicted on the 5,000 Russian ruble banknote.
The source of this article is wikipedia, the free encyclopedia.  The text of this article is licensed under the GFDL.