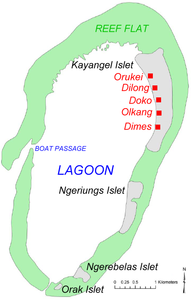 Kayangel is the northernmost state of Palau
Palau
Palau , officially the Republic of Palau , is an island nation in the Pacific Ocean, east of the Philippines and south of Tokyo. In 1978, after three decades as being part of the United Nations trusteeship, Palau chose independence instead of becoming part of the Federated States of Micronesia, a...
24 km (14.9 mi) north of Koror
Koror
Koror is the state comprising the main commercial centre of the Republic of Palau. It consists of several islands, the most prominent being Koror Island ....
. The land area is about 1.4 km² (0.540543022029549 sq mi). The population is 138 (census
Census
A census is the procedure of systematically acquiring and recording information about the members of a given population. It is a regularly occurring and official count of a particular population. The term is used mostly in connection with national population and housing censuses; other common...
of 2000). The state consists of three atoll
Atoll
An atoll is a coral island that encircles a lagoon partially or completely.- Usage :The word atoll comes from the Dhivehi word atholhu OED...
s in different states of development:

Kayangel Atoll (Ngcheangel), the only inhabited atoll of Kayangel State, with most (99 percent) of the land area of Kayangel State, is located at 08°04′N 134°42′E, about 35 km (21.7 mi) north of Babelthuap island, the main island of Palau, but only 3 km (1.9 mi) north of Babelthuap's barrier reef. The atoll is about km abbr=on north-south, and 3.7 km (2.3 mi) wide, with a total area of 20 km² (7.7 sq mi), including the lagoon. The lagoon
Lagoon
A lagoon is a body of shallow sea water or brackish water separated from the sea by some form of barrier. The EU's habitat directive defines lagoons as "expanses of shallow coastal salt water, of varying salinity or water volume, wholly or partially separated from the sea by sand banks or shingle,...
has an average depth of 6 m (19.7 ft) and a maximum depth of 9.6 m (31.5 ft), and about 25 large pinnacles can be detected from aerial photographs. The bottom of the lagoon is largely sand. On the western side of the atoll, there is a small passage for boats into the lagoon, with a depth of only 2 to 4 m (6.6 to 13.1 ft), called Ulach. Coral diversity and abundance are low in the lagoon. Large fish, dolphins and foraging sea turtles are common near the pass.

There are four densely wooded islets on the eastern and southern rim of the oval-shaped atoll, from north to south, are Kayangel, Ngeriungs, Ngerebelas and Orak.

Kayangel Islet (also called Ngcheangel or Ngajangel), is the largest and only inhabited islet of Kayangel Atoll and Kayangel State. It is 2570 m (8,431.8 ft) long north-south, with a width between 270 m (885.8 ft) in the south and 700 m (2,296.6 ft) in the north. The land area is about 98 ha (242.2 acre). There are five village
Village
A village is a clustered human settlement or community, larger than a hamlet with the population ranging from a few hundred to a few thousand , Though often located in rural areas, the term urban village is also applied to certain urban neighbourhoods, such as the West Village in Manhattan, New...
s primarily oriented to the western shore (lagoon side). They stretch over 1.5 km (0.93205910497471 mi) from north to south and are not clearly separated from each other. The villages are very small by any standard, given the aggregate population of only 138. Together, they make up the state capital, Kayangel (Ngcheangel). From north to south:


The only power on the island comes from solar panels or personal generators. There is one small school that goes from K-9th grades and a small library. The only shopping to be done on the island is from a small general store, otherwise it is what the islanders catch in the ocean or grow in the ground. There are several ways to get to the island. One is the island's speedboat that takes about two hours, but it is generally in for repairs. The more reliable modes are from either a local fisherman or a dive company that makes regular trips up to the island to dive off the reefs surrounding the island.

Ngaruangel (Ngaruangl) Reef, located at 08°10′N 134°38′E, is an incipient atoll, 8.7 km (5.4 mi) NW
NW
NW may stand for:* Northwest, an ordinal direction* Nat Wolff, a singer and actor* New Weekly, an Australian celebrity magazine* nanowire* New Wave music* Nidwalden* Norfolk and Western Railroad* North Rhine-Westphalia* North Western Reporter...
of Kayangel atoll, and separated from it by Ngaruangl Passage, a very deep (629 to 786 m (2,063.6 to 2,578.7 ) at 2 km (1.2 mi) from each atoll) and 8 km (5 mi) wide passage. The atoll is 5.4 km (3.4 mi) long north-south, and from 1.8 km (1.1 mi) wide in the north to 3.7 km (2.3 mi) in the south, and about 3 km (1.9 mi) on the average. The total area including the lagoon is 15 km² (5.8 sq mi). The lagoon is shallow, with an average depth of 6 m (19.7 ft), has about 115 pinnacle and patch reefs, and a boat passage through the northeastern part of the barrier reef. The lagoon floor is covered with thick sand deposits and thickets of staghorn Acropora
Acropora
Acropora is a genus of scleractinian coral in the Phylum Cnidaria. Some of its species are known as table coral, elkhorn coral and staghorn coral. There are currently 149 described species...
. The reef is protected by Ngaruangel Reserve.

The islet consists almost entirely of pieces of rough coral rock thrown up by surf. Most of the pieces are rough or sharp and are largely of the Acropora reticulata type, or of similar form. Sand and sandy gravel are limited to the lagoon side and the southern tip. The altitude is a little less than one meter above high tide.

There is no vegetation on the islet. Animal life is represented by numerous marine crane flies
Crane fly
A crane fly is an insect in the family Tipulidae. Adults are very slender, long-legged flies that may vary in length from though tropical species may exceed to ....
, probably Limonia, subgenus
Subgenus
In biology, a subgenus is a taxonomic rank directly below genus.In zoology, a subgeneric name can be used independently or included in a species name, in parentheses, placed between the generic name and the specific epithet: e.g. the Tiger Cowry of the Indo-Pacific, Cypraea tigris Linnaeus, which...
Dicranowia. Terns are abundant.

Velasco Reef, located at 08°20′29"N 134°36′45"E is a sunken atoll north of Ngaruangl Reef, rising steeply from the surrounding seafloor, 2000 metres (6,561.7 ft) deep. It is not clearly separated from Ngaruangl Reef and appears as its large but submerged northern extension on satellite images. It extends more than 30 km (18.6 mi) to the north, and is up to 14 km (8.7 mi) wide, giving it an oval shape, covering an area of about 330 km² (127.4 sq mi). Much of the reef is uncharted. The central depression (lagoon) is 31 metre deep, while depths along the rim (outer edges) range from 11.9 metre (generally 15 metre), on which there are overfalls when the tidal currents are strong. Heavy wave exposure limits coral diversity and cover on Velasco Reef.