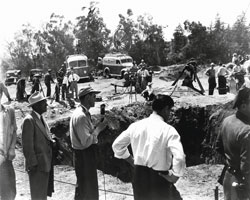 Kathryn Anne Fiscus was a three-year-old girl who died after falling into a well in San Marino, California
San Marino, California
San Marino is a small, affluent city in Los Angeles County, California. Incorporated in 1913, the City founders designed the community to be uniquely residential, with expansive properties surrounded by beautiful gardens, wide streets, and well maintained parkways...
. The attempted rescue, broadcast live on KTLA
KTLA
KTLA, virtual channel 5, is a television station in Los Angeles, California, USA. Owned by the Tribune Company, KTLA is an affiliate of the CW Television Network. KTLA's studios are on Sunset Boulevard in Hollywood, and its transmitter is located atop Mount Wilson...
, was a landmark event in American television
Television
Television is a telecommunication medium for transmitting and receiving moving images that can be monochrome or colored, with accompanying sound...
history.

On the evening of Friday, April 8, 1949, Kathy Fiscus was playing with her nine-year-old sister Barbara and cousin Gus in a field in San Marino when she fell down the 14 inches (355.6 mm) shaft of an abandoned water well. Her father, David Fiscus, worked for the California Water & Telephone Co., which had drilled the well in 1903. He had recently testified before the state legislature for a proposed law that would require the cementing of all old wells.
Within hours, a major rescue effort was underway with "drills, derricks, bulldozers and trucks from a dozen towns, three giant cranes, and 50 floodlights from Hollywood studios." After digging down 100 feet, workers reached Kathy on Sunday night. After a doctor was lowered into the shaft an announcement was made to the more than 10,000 people who had gathered to watch the rescue: "Kathy is dead and apparently has been dead since she was last heard speaking." It was determined that she died shortly after the fall, from a lack of oxygen.

The rescue attempt received nationwide attention in the United States as it was carried live on radio and on television—a still-new medium—by station KTLA. It is regarded as a watershed event in live TV coverage and was recalled nearly 40 years later during the successful 1987 rescue of Jessica McClure
Jessica McClure
Jessica McClure Morales became famous at the age of 18 months after falling into a well in the backyard of 3309 Tanner Dr. Midland, Texas, on October 14, 1987. Between that day and October 16, rescuers worked for 58 hours to free "Baby Jessica" from the eight-inch-wide well casing below the ground...
.

The location of the well is on the upper field of San Marino High School and is unmarked except for a cap covering the opening. Kathy is buried at Glen Abbey Memorial Park in Bonita, California
Bonita, California
Bonita is a census-designated place in southern San Diego County, California, nestled between the cities of Chula Vista, National City, and San Diego. The population was 12,538 at the 2010 census.-Geography:Bonita is located at ....
. The inscription on her marker reads, "One Little Girl Who United the World for a Moment".

Country singer Jimmie Osborne wrote and recorded the 1949 song "The Death of Little Kathy Fiscus" (King 788). The single sold over one million copies and Osborne donated half the proceeds to the Fiscus family. Other artists recorded versions of the song, including Kitty Wells, and Howard Vokes.

Woody Allen
Woody Allen
Woody Allen is an American screenwriter, director, actor, comedian, jazz musician, author, and playwright. Allen's films draw heavily on literature, sexuality, philosophy, psychology, Jewish identity, and the history of cinema...
fictionalized the Kathy Fiscus tragedy in his 1987 film Radio Days
Radio Days
Radio Days is a 1987 comedy film directed by Woody Allen. The film looks back on an American family's life during the Golden Age of Radio using both music and memories to tell the story.-Plot:...
. In the film a little girl named Polly Phelps falls into a well near Stroudsburg, Pennsylvania
Stroudsburg, Pennsylvania
Stroudsburg is a borough in Monroe County, Pennsylvania, United States. It is located in the Poconos region of the state, approximately five miles from the Delaware Water Gap, at the confluence of the Brodhead and Pocono Creeks. It is the county seat of Monroe County. Stroudsburg is part of the...
. It becomes a big national story and, like Kathy, little Polly does not survive. The Well (1951) and Billy Wilder
Billy Wilder
Billy Wilder was an Austro-Hungarian born American filmmaker, screenwriter, producer, artist, and journalist, whose career spanned more than 50 years and 60 films. He is regarded as one of the most brilliant and versatile filmmakers of Hollywood's golden age...
's 1951 film Ace in the Hole were also partially inspired by the event.