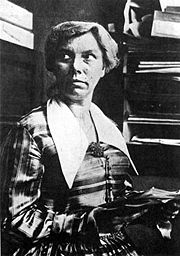 Born Carrie Katherine Richards in Ottawa County
Ottawa County, Kansas
Ottawa County is a county located in the U.S. state of Kansas. As of the 2010 census, the county population was 6,091. The largest city and county seat is Minneapolis...
, Kansas
Kansas
Kansas is a US state located in the Midwestern United States. It is named after the Kansas River which flows through it, which in turn was named after the Kansa Native American tribe, which inhabited the area. The tribe's name is often said to mean "people of the wind" or "people of the south...
, O'Hare briefly worked as a teacher in Nebraska
Nebraska
Nebraska is a state on the Great Plains of the Midwestern United States. The state's capital is Lincoln and its largest city is Omaha, on the Missouri River....
before becoming an apprentice machinist
Machinist
A machinist is a person who uses machine tools to make or modify parts, primarily metal parts, a process known as machining. This is accomplished by using machine tools to cut away excess material much as a woodcarver cuts away excess wood to produce his work. In addition to metal, the parts may...
in her native Kansas, where she was drawn into socialist politics and married fellow socialist Frank P. O'Hare. She unsuccessfully ran as a candidate for the United States Congress
United States Congress
The United States Congress is the bicameral legislature of the federal government of the United States, consisting of the Senate and the House of Representatives. The Congress meets in the United States Capitol in Washington, D.C....
in Kansas on the Socialist ticket in 1910.

As editor of the National Rip-Saw, a St. Louis-based socialist journal in the 1910s, O'Hare championed reforms in favor of the working class
Working class
Working class is a term used in the social sciences and in ordinary conversation to describe those employed in lower tier jobs , often extending to those in unemployment or otherwise possessing below-average incomes...
and toured the country as an orator. After America's entry into World War I
World War I
World War I , which was predominantly called the World War or the Great War from its occurrence until 1939, and the First World War or World War I thereafter, was a major war centred in Europe that began on 28 July 1914 and lasted until 11 November 1918...
in 1917, O'Hare led the Socialist Party's Committee on War and Militarism. For giving an anti-war speech in Bowman, North Dakota
Bowman, North Dakota
As of the census of 2000, there were 1,600 people, 702 households, and 419 families residing in the city. The population density was 1,227.8 people per square mile . There were 799 housing units at an average density of 613.2 per square mile . The racial makeup of the city was 99.12% White, 0.12%...
, O'Hare was arrested and taken to prison by federal authorities for violating the Espionage Act of 1917
Espionage Act of 1917
The Espionage Act of 1917 is a United States federal law passed on June 15, 1917, shortly after the U.S. entry into World War I. It has been amended numerous times over the years. It was originally found in Title 50 of the U.S. Code but is now found under Title 18, Crime...
, an act criminalizing interference with recruitment and enlistment of military personnel. With no federal penitentiaries for women existing at the time, she was delivered to Missouri State Penitentiary
Missouri State Penitentiary
The Missouri State Penitentiary, also known as "The Walls", was a prison in Jefferson City, Missouri that operated from 1836-2004. It was a prison of the Missouri Department of Corrections. Before its closure it was named the Jefferson City Correctional Center . Before its closure it was the oldest...
on a five-year sentence in 1919, but in 1920 was pardoned by President Warren Harding after a nationwide campaign to secure her release. In prison, O'Hare met the anarchists
Anarchism
Anarchism is generally defined as the political philosophy which holds the state to be undesirable, unnecessary, and harmful, or alternatively as opposing authority in the conduct of human relations...
Emma Goldman
Emma Goldman
Emma Goldman was an anarchist known for her political activism, writing and speeches. She played a pivotal role in the development of anarchist political philosophy in North America and Europe in the first half of the twentieth century....
and Gabriella Segata Antolini, and worked with them to improve prison conditions.

O'Hare, unlike Socialist Party leader Eugene V. Debs
Eugene V. Debs
Eugene Victor Debs was an American union leader, one of the founding members of the International Labor Union and the Industrial Workers of the World , and several times the candidate of the Socialist Party of America for President of the United States...
and other prominent socialists at the time, was a supporter of racial segregation
Racial segregation
Racial segregation is the separation of humans into racial groups in daily life. It may apply to activities such as eating in a restaurant, drinking from a water fountain, using a public toilet, attending school, going to the movies, or in the rental or purchase of a home...
, and penned a 1912 pamphlet titled "'Nigger' Equality", which attempted to appeal to Southern voters http://www.marxists.org/history/usa/parties/spusa/1912/0325-ohare-niggerequality.pdf.

Kate O'Hare divorced Frank O'Hare in June 1928 and married the engineer and businessman Charles C. Cunningham in California
California
California is a state located on the West Coast of the United States. It is by far the most populous U.S. state, and the third-largest by land area...
in November of the same year. Despite her continued involvment in politics, much of O'Hare's prominence gradually faded. O'Hare worked on behalf of Upton Sinclair
Upton Sinclair
Upton Beall Sinclair Jr. , was an American author who wrote close to one hundred books in many genres. He achieved popularity in the first half of the twentieth century, acquiring particular fame for his classic muckraking novel, The Jungle . It exposed conditions in the U.S...
's Socialist campaign in the 1934 California gubernatorial election, and briefly served on the staff of Wisconsin Progressive Party
Wisconsin Progressive Party
The Wisconsin Progressive Party , was a third party which briefly held a dominant role in Wisconsin politics. The Party was the brainchild of Philip La Follette and Robert M. La Follette, Jr., the sons of the famous Wisconsin Governor and Senator Robert M. La Follette, Sr....
politician Thomas R. Amlie in 1937-1938. Esteemed as a penal reform advocate, she served as an assistant director of the California Department of Penology in 1939-1940.