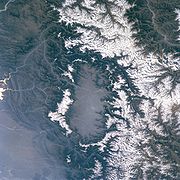 The Kashmir valley or Vale of Kashmir is a valley between Himalayas and the Pir Panjal Range
Pir Panjal Range
The Pir Panjal ranges lie in the Inner Himalayan region, running from east southeast to west northwest across the states of Himachal Pradesh and Kashmir in India as well as Pakistan-administered Kashmir, where the average elevation varies from to . The Himalayas show a gradual elevation towards...
. It is around 135 km long and 32 km wide, formed by the Jhelum River
Jhelum River
Jehlum River or Jhelum River , ) is a river that flows in India and Pakistan. It is the largest and most western of the five rivers of Punjab, and passes through Jhelum District...
. It was called "Paradise on Earth" by Jahangir
Jahangir
Jahangir was the ruler of the Mughal Empire from 1605 until his death. The name Jahangir is from Persian جهانگیر,meaning "Conqueror of the World"...
.
It lies completely within Indian administration in the state of Jammu and Kashmir
Jammu and Kashmir
Jammu and Kashmir is the northernmost state of India. It is situated mostly in the Himalayan mountains. Jammu and Kashmir shares a border with the states of Himachal Pradesh and Punjab to the south and internationally with the People's Republic of China to the north and east and the...
. Srinagar
Srinagar
Srinagar is the summer seasonal capital of Jammu and Kashmir. It is situated in Kashmir Valley and lies on the banks of the Jhelum River, a tributary of the Indus. It is one of the largest cities in India not to have a Hindu majority. The city is famous for its gardens, lakes and houseboats...
is its main city and also the summer capital of the state. Other main cities are Anantnag
Anantnag
Anantnag , a city and a municipality in Anantnag district in the state of Jammu & Kashmir, India. Anantnag is regarded as the commercial and financial capital of the valley of Kashmir...
and Baramulla
Baramulla
Baramulla , known as Varahamula in antiquity, is a city in the Baramulla district in Jammu and Kashmir state in northern India...
. There has been armed insurgency since 1989 due to the Kashmir Conflict
Kashmir conflict
The Kashmir conflict is a territorial dispute between India and Pakistan over the Kashmir region, the northwesternmost region of South Asia....
. It has access to the rest of India through the Banihal Tunnel near Qazigund on NH 1A to Jammu
Jammu
Jammu , also known as Duggar, is one of the three administrative divisions within Jammu and Kashmir, the northernmost state in India.Jammu city is the largest city in Jammu and the winter capital of Jammu and Kashmir...
, which is interrupted by snowfall in winter. Among the popular tourist places in the valley are Gulmarg
Gulmarg
Gulmarg is a town, a hill station and a notified area committee in Baramula district in the Indian state of Jammu and Kashmir.-Geography:Gulmarg is located 52 km from Srinagar. It is located at . It has an average elevation of .-Demographics:...
, Dal Lake
Dal Lake
Dal Lake is a lake in Srinagar, the summer capital of the northernmost Indian state of Jammu and Kashmir. The urban lake, which is the second largest in the state, is integral to tourism and recreation in Kashmir and is nicknamed the "Jewel in the crown of Kashmir" or "Srinagar's Jewel"...
, Pahalgam
Pahalgam
Pahalgam is a town and a notified area committee in Anantnag district in India's northernmost state of Jammu and Kashmir. It is a popular tourist destination, and every year, many tourists visit Pahalgam.- Geography :...
, and the Amarnath Temple.
The source of this article is wikipedia, the free encyclopedia.  The text of this article is licensed under the GFDL.