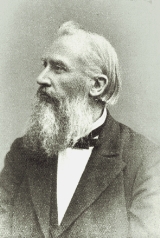 Encyclopedia
Karl Ludwig Kahlbaum was a German psychiatrist
Psychiatrist
A psychiatrist is a physician who specializes in the diagnosis and treatment of mental disorders. All psychiatrists are trained in diagnostic evaluation and in psychotherapy...
. In 1855 he received his medical doctorate at Berlin
Berlin
Berlin is the capital city of Germany and is one of the 16 states of Germany. With a population of 3.45 million people, Berlin is Germany's largest city. It is the second most populous city proper and the seventh most populous urban area in the European Union...
, and subsequently worked as a physician at the mental asylum in Wehlau. For a period of time he was also a lecturer at the University of Königsberg
University of Königsberg
The University of Königsberg was the university of Königsberg in East Prussia. It was founded in 1544 as second Protestant academy by Duke Albert of Prussia, and was commonly known as the Albertina....
(1863-66), and from 1867 was director of the mental hospital
Mental Hospital
Mental hospital may refer to:*Psychiatric hospital*hospital in Nepal named Mental Hospital...
at Görlitz
Görlitz
Görlitz is a town in Germany. It is the easternmost town in the country, located on the Lusatian Neisse River in the Bundesland of Saxony. It is opposite the Polish town of Zgorzelec, which was a part of Görlitz until 1945. Historically, Görlitz was in the region of Upper Lusatia...
. He would remain at Görlitz for the remainder of his life.

As a psychiatrist, Kahlbaum realized that attempting to group mental disorders based on similarities of outward symptoms was futile, and in his work tried to develop a classification system that grouped mental diseases according to their course and outcome. He is remembered for research done at Görlitz with his associate Ewald Hecker
Ewald Hecker
Ewald Hecker was a German psychiatrist who was an important figure in the early days of modern psychiatry. He is known for research done with his mentor, psychiatrist Karl Ludwig Kahlbaum ....
(1843-1909) involving studies of young psychotic patients. In their analyses of mental disorders, Kahlbaum and Hecker introduced a classification system that used descriptive terms such as dysthymia, cyclothymia
Cyclothymia
Cyclothymia is a mood and mental disorder in the bipolar spectrum that causes both hypomanic and depressive episodes. It is defined medically within the bipolar spectrum and consists of recurrent disturbances between sudden hypomania and dysthymic episodes. The diagnosis of cyclothymic disorder is...
, catatonia
Catatonia
Catatonia is a state of neurogenic motor immobility, and behavioral abnormality manifested by stupor. It was first described in 1874: Die Katatonie oder das Spannungsirresein ....
, paraphrenia
Paraphrenia
Paraphrenia is described as a group of psychotic illnesses distinct from paranoia and from schizophrenia.. Paraphrenia as a separate disorder is not included in either ICD 10 or DSM IV and is likely to be classified as atypical psychosis, schizoaffective disorder or delusional disorder using these...
and hebephrenia. In their research they were pioneers in the application of modern clinical practices in the study of mental health.

Kahlbaum referred to Jugendliche Irresein or "juvenile madness", and stressed the importance of parental upbringing to prevent this condition from occurring. In his research of catatonia, he published the monograph
Monograph
A monograph is a work of writing upon a single subject, usually by a single author.It is often a scholarly essay or learned treatise, and may be released in the manner of a book or journal article. It is by definition a single document that forms a complete text in itself...
, Die Katatonie oder das Spannungsirresein, in which he characterizes the disorder as disturbance in motor functionality that represents a phase in a progressive illness that includes stages of mania, depression
Clinical depression
Major depressive disorder is a mental disorder characterized by an all-encompassing low mood accompanied by low self-esteem, and by loss of interest or pleasure in normally enjoyable activities...
and psychosis
Psychosis
Psychosis means abnormal condition of the mind, and is a generic psychiatric term for a mental state often described as involving a "loss of contact with reality"...
that typically ends in dementia.

Kahlbaum's work would in time influence German psychiatrist Emil Kraepelin
Emil Kraepelin
Emil Kraepelin was a German psychiatrist. H.J. Eysenck's Encyclopedia of Psychology identifies him as the founder of modern scientific psychiatry, as well as of psychopharmacology and psychiatric genetics. Kraepelin believed the chief origin of psychiatric disease to be biological and genetic...
. Strictly speaking however Kahlbaum's catatonia is not, as is commonly believed, the same as the catatonia found in Emil Kraepelin's concept of dementia praecox
Dementia praecox
Dementia praecox refers to a chronic, deteriorating psychotic disorder characterized by rapid cognitive disintegration, usually beginning in the late teens or early adulthood. It is a term first used in 1891 in this Latin form by Arnold Pick , a professor of psychiatry at the German branch of...
. Rather, as Adolf Meyer
Adolf Meyer (psychiatrist)
Adolf Meyer, M.D., LL.D., , was a Swiss psychiatrist who rose to prominence as the president of the American Psychiatric Association and was one of the most influential figures in psychiatry in the first half of the twentieth century...
would later complain with respect to dementia praecox, "Kahlbaum's catatonia was liberally extended so as to include everything that showed catalepsy
Catalepsy
Catalepsy is also a term used by hypnotists to refer to the state of making a hypnotised subject's arm, leg or back rigid. "Arm catalepsy" is often a pre-hypnotic test performed prior to an induction into a full trance.-Causes:...
, negativism, automatism, stereotypy
Stereotypy
A stereotypy is a repetitive or ritualistic movement, posture, or utterance, found in people with mental retardation, autism spectrum disorders, tardive dyskinesia and stereotypic movement disorder. Stereotypies may be simple movements such as body rocking, or complex, such as self-caressing,...
, and verbigeration" (Meyer, 1910, p. 276).

As the 20th century came to its close, the American Psychiatric Association (APA) would declare that occurrences of catatonia were by 1987, rare (APA, 1987).

The eponymous "Kahlbaum's syndrome" is a catatonic symptom characterized by continuous and purposeless rhythmic repetition of words and sentences that are meaningless or insignificant.