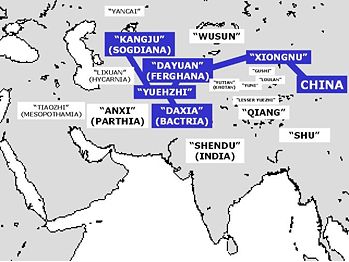 Kangju was the name of an ancient people and kingdom in Central Asia
Central Asia
Central Asia is a core region of the Asian continent from the Caspian Sea in the west, China in the east, Afghanistan in the south, and Russia in the north...
. It was a nomadic federation of unknown ethnic and linguistic origin which became for a couple of centuries the second greatest power in Transoxiana
Transoxiana
Transoxiana is the ancient name used for the portion of Central Asia corresponding approximately with modern-day Uzbekistan, Tajikistan, southern Kyrgystan and southwest Kazakhstan. Geographically, it is the region between the Amu Darya and Syr Darya rivers...
after the Yuezhi
Yuezhi
The Yuezhi, or Rouzhi , also known as the Da Yuezhi or Da Rouzhi , were an ancient Central Asian people....
.

The ethnicity of the K'ang-chü people is thought to be Turkic
Turkic peoples
The Turkic peoples are peoples residing in northern, central and western Asia, southern Siberia and northwestern China and parts of eastern Europe. They speak languages belonging to the Turkic language family. They share, to varying degrees, certain cultural traits and historical backgrounds...
by Shiratori Kurakichi, based on textual studies, other scholars tend to consider them Iranian
Iranian peoples
The Iranian peoples are an Indo-European ethnic-linguistic group, consisting of the speakers of Iranian languages, a major branch of the Indo-European language family, as such forming a branch of Indo-European-speaking peoples...
or even Tocharian
Tocharians
The Tocharians were the Tocharian-speaking inhabitants of the Tarim Basin, making them the easternmost speakers of Indo-European languages in antiquity. They were known as, or at least closely related to, the Yuezhi of Chinese sources...
.

"Kangju is situated some 2,000 li [832 kilometers] northwest of Dayuan

Dayuan
The Dayuan or Ta-Yuan were a people of Ferghana in Central Asia, described in the Chinese historical works of Records of the Grand Historian and the Book of Han. It is mentioned in the accounts of the famous Chinese explorer Zhang Qian in 130 BCE and the numerous embassies that followed him into...
. Its people are nomads and resemble the Yuezhi
Yuezhi
The Yuezhi, or Rouzhi , also known as the Da Yuezhi or Da Rouzhi , were an ancient Central Asian people....
in their customs. They have 80,000 or 90,000 skilled archers. The country is small, and borders Dayuan (Ferghana). It acknowledges sovereignty to the Yuezhi people in the South and the Xiongnu
Xiongnu
The Xiongnu were ancient nomadic-based people that formed a state or confederation north of the agriculture-based empire of the Han Dynasty. Most of the information on the Xiongnu comes from Chinese sources...
in the East.

By the time of the Hanshu (which covers the period from 125 BCE to 23 CE), Kangju had expanded considerably to a nation of some 600,000 individuals, with 120,000 men able to bear arms. Kangju is clearly now a major power in its own right. By this time it had gained control of Dayuan and Sogdiana
Sogdiana
Sogdiana or Sogdia was the ancient civilization of an Iranian people and a province of the Achaemenid Empire, eighteenth in the list on the Behistun Inscription of Darius the Great . Sogdiana is "listed" as the second of the "good lands and countries" that Ahura Mazda created...
in which it controlled “five lesser kings” (小王五).

The kingdom of Yancai (lit. "Vast Steppe"), strategically centered near the northern shore of the Aral Sea straddling the northern branch of the Silk Route, and which had 100,000 "trained bowmen," had become a dependency of Kangju.

The biography of the Chinese General Ban Chao
Ban Chao
Ban Chao , courtesy name Zhongsheng , was born in Xianyang, Shaanxi, and the younger brother of the famous historian, Ban Gu who, with his father Ban Biao, and sister, Ban Zhao, wrote the famous Hanshu, or 'History of the Former Han Dynasty'....
in the Hou Hanshu says in 94
94
Year 94 was a common year starting on Wednesday of the Julian calendar. At the time, it was known as the Year of the Consulship of Calpurnius and Magus...
CE that the Yuezhi were arranging a marriage of their king with a Kangju princess. The Chinese then sent "considerable presents of silks" to the Yuezhi successfully gaining their help in pressuring the Kangju to stop supporting the king of Kashgar
Kashgar
Kashgar or Kashi is an oasis city with approximately 350,000 residents in the western part of the Xinjiang Uyghur Autonomous Region of the People's Republic of China. Kashgar is the administrative centre of Kashgar Prefecture which has an area of 162,000 km² and a population of approximately...
against them.

The account on the 'Western Regions' in the Hou Hanshu, based on a report to the Chinese emperor c. 125 CE, mentions that, at that time, Liyi 栗弋 (= Suyi 粟弋) = Sogdiana, and both the "old" Yancai (which had changed its name to Alanliao
Alans
The Alans, or the Alani, occasionally termed Alauni or Halani, were a group of Sarmatian tribes, nomadic pastoralists of the 1st millennium AD who spoke an Eastern Iranian language which derived from Scytho-Sarmatian and which in turn evolved into modern Ossetian.-Name:The various forms of Alan —...
and seems here to have expanded its territory to the Caspian Sea
Caspian Sea
The Caspian Sea is the largest enclosed body of water on Earth by area, variously classed as the world's largest lake or a full-fledged sea. The sea has a surface area of and a volume of...
), and Yan, a country to Yancai's north, as well as the strategic city of "Northern Wuyi" 北烏伊 (Alexandria Eschate
Alexandria Eschate
Alexandria Eschate or Alexandria Eskhata was founded by Alexander the Great in August 329 BCE as his most northerly base in Central Asia...
, or modern Khujand
Khujand
Khujand , also transliterated as Khudzhand, , formerly Khodjend or Khodzhent until 1936 and Leninabad until 1991, is the second-largest city of Tajikistan. It is situated on the Syr Darya River at the mouth of the Fergana Valley...
), were all dependent on Kangju.

The 3rd century Weilüe
Weilüe
The Weilüe written by Yu Huan between CE 239, the end of Emperor Ming’s reign, and 265 CE, the end of the Cao Wei . Although not an "official historian," Yu Huan has always been held in high regard amongst Chinese scholars....
states that Kangju was among a number of countries that "had existed previously and neither grown nor shrunk," but by then the kingdoms of Liu, Yan and Yancai/Alan were no longer vassals of Kangju.

Kangju maintained its independence and continued sending envoys to China up until the end of the 3rd century CE. Shortly after, its power began to wane and it was absorbed into the Hephthalite
Hephthalite
The Hephthalites or Hephthalite is a pre-Islamic Greek term for local Abdali Afghans, who's famous ruler was Nazak Abdali . Hephthalites were a Central Asian nomadic confederation of the AD 5th-6th centuries whose precise origins and composition remain obscure...
empire.

"Kangju 康居 = the Talas basin, Tashkent and Sogdiana. It is not clear whether the Chinese name 康居 Kangju was intended to transcribe an ethnic name, or to be descriptive. 居 ju can mean: ‘to settle down,’ ‘to take up one’s abode,’ ‘residence,’ or ‘to occupy (militarily).’. . . The term, therefore, could simply mean “the abode of the Kang,” or “territory occupied by the Kang.”. . . . However, the character kang 康 literally means ‘peaceful,’ ‘happy,’ so Kangju could alternatively be translated as the: ‘Peaceful Land,’ or ‘Abode of the Peaceful (people).’. . . Even if the name Kangju was originally an attempt to transcribe a foreign name, it would have at least carried some sense of it being a peaceful place to Chinese speakers, and the name Kang would have had overtones of a peaceful people."

Kangju was referred to as the State of Kang (康国) during the Sui
Sui Dynasty
The Sui Dynasty was a powerful, but short-lived Imperial Chinese dynasty. Preceded by the Southern and Northern Dynasties, it ended nearly four centuries of division between rival regimes. It was followed by the Tang Dynasty....
and Tang
Tang Dynasty
The Tang Dynasty was an imperial dynasty of China preceded by the Sui Dynasty and followed by the Five Dynasties and Ten Kingdoms Period. It was founded by the Li family, who seized power during the decline and collapse of the Sui Empire...
dynasties, though by that time the area was ruled by the Göktürk Khaganate. This adds weight to the theory that the "kingdom" was known after the name of a people known to the Chinese as the Kang.
The source of this article is wikipedia, the free encyclopedia.  The text of this article is licensed under the GFDL.