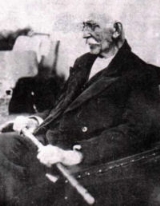 Encyclopedia
Mohammad Ghaffari better known as Kamal-ol-Molk (also Kamal-al-Molk), was an Iranian painter
Painting
Painting is the practice of applying paint, pigment, color or other medium to a surface . The application of the medium is commonly applied to the base with a brush but other objects can be used. In art, the term painting describes both the act and the result of the action. However, painting is...
and part of the Ghaffari Clan in Kashan.

Mohammad Ghaffari, better known as Kamal-ol-Molk, born in Kashan in 1847, to a family greatly attached to art, was undoubtedly one of the most eminent artists in Iran. Dubbed as the Michelangelo of Persia, his uncle, Mirza AbolHassan Khan Ghaffari, known as Sanee-ol-Molk, a 19th century celebrated painter, was unrivalled in watercolor portraits. His father, Mirza Bozorg Ghaffari Kashani, was the founder of Iran's painting school and a famous artist as well. His brother, AbuTorab Ghaffari, was also a distinguished painter of his time. Mohammad developed an interest in calligraphy and painting from the early years of his life. In his childhood eagerness, he drew charcoal sketches on the walls of his room. Some of the sketches he drew in that very house may amazingly, still be visible.

Upon completion of his primary education, Mohammad moved to Tehran. To further his studies, he registered in Dar-ul-Funun School, a modern institute of higher learning in Persia, where he studied painting with Mozayyen-od-Doleh, a well-known painter who had visited Europe and studied Western art.

He studied there for a period of three years during which the sparks of his genius ignited. Whenever he found some free time, he spent it on painting, strengthening his union with nature. Through his sharp vision, he could see secrets in lines and colors hidden from the common eye.

In his school days, the young Ghaffari was given the name Mirza Mohammad Kashi. In this very short period of education he was able to attract public attention to himself as a talented artist.

In his visits to Dar-ol-Fonoon, Nasereddin Shah Qajar came to know Mohammad Ghaffari and, having observed his incredible talent, he invited him to the court. Mohammad did his best to perfect his technique. Noticing his mastery in painting, Nasereddin Shah gave him the title "Kamal-ol-Molk (Perfection on Land)."

During the years he stayed at Nasereddin Shah's court, Kamal-ol-Molk created some of his most significant works. The paintings he did in this period, which lasted up until the assassination of Nasereddin Shah, were portraits of important people, landscapes, paintings of royal camps and hunting grounds, and different parts of royal palaces.

In this busiest period of Kamal-ol-Molk's artistic life, he created over 170 paintings. Unfortunately, most of these paintings have either been destroyed or taken abroad.

The works he created in this period indicate his desire to discover the laws of oil painting. He advanced so much that he even acquired laws of perspective by himself and applied them to his works. His mastery in the delicate use of a brush was well as bright and lively colors distinguished him from his contemporaries.

Visit to Europe
Following Nasereddin Shah's death, Kamal-ol-Molk found it impossible to work under Mozaffareddin Shah. Therefore, he set out for Europe at the age of 47 to improve his art. The West opened a new horizon before the curious eyes of the artist. Discussions with distinguished European artists gave him the opportunity to know the ins and outs of their style and improve his own technique.

Kamal-ol-Molk copied some of Rembrandt's works. He recreated Rembrandt's famous "Self Portrait", "Jonah", and "Saint Matthew". These copies were so splendid, so enchanting that those who compared them with the originals were unable to tell them apart.

Kamal-ol-Molk visited most of Europe's museums and closely studied the works of some well-known artists such as Raphael, Titian, and da Vinci and adapted and altered some of their works.

He stayed in Europe for about four years during which he never spent a single moment in vain. He experienced, created and learned. In 1898, he returned to Iran.

The increasing pressure on Kamal-ol-Molk, originating in Mozaffareddin Shah's court, left him no option but to leave his country for Iraq, in spite of all the affection he felt for Iran.

The visits he made to the holy cities in Iraq opened a new window to his creative spirit and great talent oin his life. The golden domes, turquoise minarets, mosques, holy tombs, long lines of pligrims walking round the holy shrines were all sources of inspiration for the artist himself in which he later adapted and turned into artworks.

"Karbala-ye-Moalla Square", and "Baghdad Jewish Fortune Tellers" are two of his most magnificent works of this period.

With the advent of the Constitutional Movement, after a two-year stay in Iraq, Kamal-ol-Molk returned to Iran and joined the Constitutionalists because of the harted he had developed towards Mazaffareddin Shah's government. Portraits like "Commander Asa'd Bakhtiari" and "Azad-ol-Molk" signify this period.

The post-Constitutional Movement era of Persia brought about a new atmosphere for the artist. The Constitutionalists were cultured and appreciated art more than did their predecessors, thus respect for Kamal-ol-Molk and his works increased.

The School's goal was to find new talents, embrace them and educate them in the best possible way. Kamal-ol-Molk did not confine himself to painting. Rather, he introduced other arts and crafts such as carpet weaving, mosaic
Mosaic
Mosaic is the art of creating images with an assemblage of small pieces of colored glass, stone, or other materials. It may be a technique of decorative art, an aspect of interior decoration, or of cultural and spiritual significance as in a cathedral...
designing, and woodwork to his school in order to revive the dying fine arts. In addition to teaching art, through his kind behavior he also taught students love, morals and humanity. Many a time he stayed late at school, teaching. He even allotted a portion of his monthly payment to poor students.

In a relatively short time, Kamal-ol-Molk trained competent students, who became famous artists later on. The achievements of these artists received much attention both in Iran and Europe. Among them are Hossein Ali Khan Vaziri, Esmaeel Ashtiani, Ali Mohammad Heidarian, Mahmood Olia, Nemat-ol-Lah Moshiri, Ali Akbar Yasami, and Mohsen Soheili.

In 1940, Kamal-ol-Molk, the distingushed artist whose love of his country knew utterly no boundary, died in Nishapur
Nishapur
Nishapur or Nishabur , is a city in the Razavi Khorasan province in northeastern Iran, situated in a fertile plain at the foot of the Binalud Mountains, near the regional capital of Mashhad...
, Iran
Iran
Iran , officially the Islamic Republic of Iran , is a country in Southern and Western Asia. The name "Iran" has been in use natively since the Sassanian era and came into use internationally in 1935, before which the country was known to the Western world as Persia...
. Mournful people, especially family and closely related friends, marched his body next to the tomb of Sufi poet, Farid-al-Din-Attar. 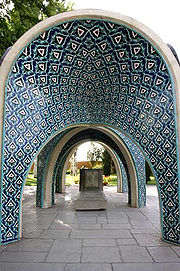