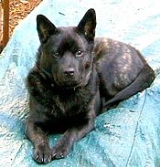 Encyclopedia
The is a breed
Dog breed
Dog breeds are groups of closely related and visibly similar domestic dogs, which are all of the subspecies Canis lupus familiaris, having characteristic traits that are selected and maintained by humans, bred from a known foundation stock....
of dog
Dog
The domestic dog is a domesticated form of the gray wolf, a member of the Canidae family of the order Carnivora. The term is used for both feral and pet varieties. The dog may have been the first animal to be domesticated, and has been the most widely kept working, hunting, and companion animal in...
that hails from Japan where it is a natural monument and has been bred for centuries. It is an extremely rare
Rare breed (dog)
Rare breed is any breed of dog that is small in number. Since dogs have greater genetic variability than other domesticated animals the number of possible breeds is vast...
dog even in its native land and is related to the Japanese Spitz
Japanese Spitz
The is a small to medium breed of dog of the Spitz type. The Japanese Spitz is a companion dog and pet. There are varying standards around the world as to the ideal size of the breed, but they are always larger than their smaller cousins, the Pomeranian. They were developed in Japan in the 1920s...
dog type
Dog type
Dog types are broad categories of dogs based on function, with dogs identified primarily by specific function or style of work rather than by lineage or appearance....
.

The Kai Ken is a medium sized dog with a wedge shaped head and prick ears. Males are typically 18 to 22 inches at the shoulder, while the females are slightly smaller, 17 to 20 inches at the shoulder. The tail may be curled over the back, or carried in a sickle position. Limbs should be strong and hocks should be well developed reflecting the dogs’ history of mountain life. The coat is of harsh texture, medium length, and comes in various shades of brindle (tiger stripes). The red is the Aka-tora, the black is the Kuro-tora and between them, the Chu-tora. Puppies are born a solid color and their brindle markings develop as they age, sometimes taking as long as five years before fully showing.

The Kai Ken is intelligent, agile, alert and brave. They are naturally hunters and make good guard dogs, being reserved with strangers but loyal to their families. They are friendly, often good with children and are not usually aggressive towards other dogs. Many love to swim, and have been known to cross rivers and climb trees while chasing their prey.

The Kai Ken is considered to be the most ancient, and purest dog breed in Japan. It was developed in the isolated district of Kai (Yamanashi Prefecture
Yamanashi Prefecture
is a prefecture of Japan located in the Chūbu region of the island of Honshū. The capital is the city of Kōfu.-Pre-history to the 14th century:People have been living in the Yamanashi area for about 30,000 years...
) as a hunting dog. Kai were used to hunt boar and deer. This breed was designated a natural monument in Japan in 1934.