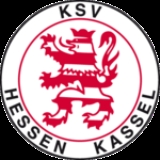 Encyclopedia
KSV Hessen Kassel is a German association football club
Football in Germany
Association football is the most popular sport in Germany. The German Football Association is the sport's national governing body, with 6.6 million members organized in over 26,000 football clubs. There is a league system, with the 1. and 2. Bundesliga on top, and the winner of the first...
based in Kassel
Kassel
Kassel is a town located on the Fulda River in northern Hesse, Germany. It is the administrative seat of the Kassel Regierungsbezirk and the Kreis of the same name and has approximately 195,000 inhabitants.- History :...
, Hesse
Hesse
Hesse or Hessia is both a cultural region of Germany and the name of an individual German state.* The cultural region of Hesse includes both the State of Hesse and the area known as Rhenish Hesse in the neighbouring Rhineland-Palatinate state...
. The club was founded as FC Union 93 Kassel in 1893 and just two years later joined FC Hassia 93 Cassel to form Casseler FV 95. In 1919, fusion with VfK Kassel created SV Kurhessen Kassel.

It was as Kurhessen that the club joined the Gauliga Hessen
Gauliga Hessen
The Gauliga Hessen was the highest football league in the German state of Hesse and the Prussian province of Hesse-Nassau from 1933 to 1945. From 1941, it was renamed Gauliga Kurhessen...
, one of sixteen top flight divisions established in the re-organization of German football in 1933 under the Third Reich. They were relegated at the end of the 1935–36 season and made their way back in 1938, but continued to perform poorly, narrowly missing relegation in subsequent seasons. They earned their best result in 1942 in the newly formed Gauliga Kurhessen, finishing just two points shy of division winners 1. SV Borussia 04 Fulda. In 1944, they joined CSC 03 Kassel to form the combined wartime side KSG SV Kurhessen/CSC 03 Kassel and again finished two points behind the division leaders, this time in third place on goal difference. The Gauliga Kurhessen was re-organized into three groups for the following season and the club assigned to the Gruppe Kassel, but the region was overtaken by World War II, bringing a stop to league play.

After the war, SVKK was one of a number of clubs merged to form the Gründung der Sportgruppe Süd, an association active in a number of sports. This club became VfL Kassel in 1946, and finally, merged with Kasseler SV Kassel in November 1947 to become today's KSV Hessen Kassel.

Those runs at the Bundesliga in the 80's, alongside an advance to the quarter final of the German Cup in 1991, represent the apex of the team's achievement. The club was bankrupted in 1993 and the football side set off on its own as FC Hessen Kassel. They too had financial problems and in 1998 also found themselves bankrupt, but this time plunged all the way down to Kreisliga Hessen A (VIII). Kassel began their recovery by going unbeaten over the course of the next two seasons and advanced to the Oberliga Hessen (IV) which they won in 2005–06 to earn a promotion to the Regionalliga
Regionalliga (football)
The Fußball-Regionalliga is the fourth tier of football in the German football league system. Until 1974, it was the second tier of the league system before being disbanded. The Regionalliga was then re-introduced as the third tier of the system in 1994...
(III). In 2007–2008 they failed to qualify for the new 3rd Liga
3rd Liga
The 3rd Liga is the third division of football in Germany. The league started with the beginning of the 2008–09 season, when it replaced the Regionalliga as the third tier football league in Germany. In the German football league system, it is positioned between the 2...
, so they remain in the Regionaliga Süd, which is now tier four.