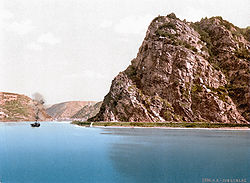 Köln-Düsseldorfer is a river cruise
River cruise
A River cruise is a voyage along inland waterways, often stopping at multiple ports along the way. Since cities and towns often grew up around rivers, river cruise ships frequently dock in the center of cities and towns.- Descriptions :...
operator based in Cologne
Cologne
Cologne is Germany's fourth-largest city , and is the largest city both in the Germany Federal State of North Rhine-Westphalia and within the Rhine-Ruhr Metropolitan Area, one of the major European metropolitan areas with more than ten million inhabitants.Cologne is located on both sides of the...
, Germany
Germany
Germany , officially the Federal Republic of Germany , is a federal parliamentary republic in Europe. The country consists of 16 states while the capital and largest city is Berlin. Germany covers an area of 357,021 km2 and has a largely temperate seasonal climate...
. The company operates a total of 14 cruise ships on the Rhine, Main and Moselle rivers.

The famous KD steamer line operated on the Rhine both with connecting steamers
Steamboat
A steamboat or steamship, sometimes called a steamer, is a ship in which the primary method of propulsion is steam power, typically driving propellers or paddlewheels...
and tourist boats. The Lorelei
Lorelei
The Lorelei is a rock on the eastern bank of the Rhine near St. Goarshausen, Germany, which soars some 120 metres above the waterline. It marks the narrowest part of the river between Switzerland and the North Sea. A very strong current and rocks below the waterline have caused many boat...
rock was a famed day outing for pleasure seekers.


Early history of tourism in Germany

The first steamboat
Steamboat
A steamboat or steamship, sometimes called a steamer, is a ship in which the primary method of propulsion is steam power, typically driving propellers or paddlewheels...
s arrived from England
England
England is a country that is part of the United Kingdom. It shares land borders with Scotland to the north and Wales to the west; the Irish Sea is to the north west, the Celtic Sea to the south west, with the North Sea to the east and the English Channel to the south separating it from continental...
in 1816, heralding a new age of tourism in Germany
Tourism in Germany
According to Travel and Tourism Competitiveness Reports, Germany is rated as one of the safest travel destinations worldwide. Germany is also the third most visited country in Europe, with a total of 369.6 million overnights during 2010...
. Ten years later, the first German shipping line started up its operation between Cologne
Cologne
Cologne is Germany's fourth-largest city , and is the largest city both in the Germany Federal State of North Rhine-Westphalia and within the Rhine-Ruhr Metropolitan Area, one of the major European metropolitan areas with more than ten million inhabitants.Cologne is located on both sides of the...
and Mainz
Mainz
Mainz under the Holy Roman Empire, and previously was a Roman fort city which commanded the west bank of the Rhine and formed part of the northernmost frontier of the Roman Empire...
; by 1856 the millionth ticket was proudly sold. In 1832, the first steam boat journeyed from the North Sea
North Sea
In the southwest, beyond the Straits of Dover, the North Sea becomes the English Channel connecting to the Atlantic Ocean. In the east, it connects to the Baltic Sea via the Skagerrak and Kattegat, narrow straits that separate Denmark from Norway and Sweden respectively...
all the way to Basel
Basel
Basel or Basle In the national languages of Switzerland the city is also known as Bâle , Basilea and Basilea is Switzerland's third most populous city with about 166,000 inhabitants. Located where the Swiss, French and German borders meet, Basel also has suburbs in France and Germany...
, but this was not a regular service. Mannheim
Mannheim
Mannheim is a city in southwestern Germany. With about 315,000 inhabitants, Mannheim is the second-largest city in the Bundesland of Baden-Württemberg, following the capital city of Stuttgart....
was an established port by 1840, and the river became heavily travelled during the industrial revolution
Industrial Revolution
The Industrial Revolution was a period from the 18th to the 19th century where major changes in agriculture, manufacturing, mining, transportation, and technology had a profound effect on the social, economic and cultural conditions of the times...
. In 1846 the Ludwig-Donau-Canal was completed after 9 years of work. It was named after King Ludwig I of Bavaria
Ludwig I of Bavaria
Ludwig I was a German king of Bavaria from 1825 until the 1848 revolutions in the German states.-Crown prince:...
.

The KD Steamer Line can trace its history back to 1853 when two earlier companies, the Preussisch-Rheinischen Dampfschiffahrtsgesellschaft (PRDG), the "Köln
KOLN
KOLN, digital channel 10, is the CBS affiliate in Lincoln, Nebraska. It operates a satellite station, KGIN, on digital channel 11 in Grand Island. KGIN repeats all KOLN programming, but airs separate commercials...
" company and the Dampfschiffahrtsgesellschaft für den Nieder- und Mittelrhein (DGNM), the "Düsseldorf
Düsseldorf
Düsseldorf is the capital city of the German state of North Rhine-Westphalia and centre of the Rhine-Ruhr metropolitan region.Düsseldorf is an important international business and financial centre and renowned for its fashion and trade fairs. Located centrally within the European Megalopolis, the...
" company, merged at a time of intense competition and in response to the loss of much of the freight and passenger traffic along the Rhine following the expansion of the railways along its banks.

Despite the merger, the two companies, which were established in 1826 and 1836 respectively, maintained semi-independent operations ordering their own vessels which were known as "Köln" or "Düsseldorf" boats. Although other companies operated vessels during this period, especially in the more northerly and southerly stretches of the river, the KD came to dominate and absorb the competitors, such as the Mülheim
Mülheim
Mülheim an der Ruhr, also called "City on the River", is a city in North Rhine-Westphalia in Germany. It is located in the Ruhr Area between Duisburg, Essen, Oberhausen and Ratingen...
Company (MDAG), with the exception of the Dutch Steamboat Company (NSM/NSR), which traced its inception back to 1823, when steam was first introduced for passenger and goods transport.

The KD operated 38 paddle steamer
Paddle steamer
A paddle steamer is a steamship or riverboat, powered by a steam engine, using paddle wheels to propel it through the water. In antiquity, Paddle wheelers followed the development of poles, oars and sails, where the first uses were wheelers driven by animals or humans...
s at the outbreak of World War I
World War I
World War I , which was predominantly called the World War or the Great War from its occurrence until 1939, and the First World War or World War I thereafter, was a major war centred in Europe that began on 28 July 1914 and lasted until 11 November 1918...
and 20 at the outbreak of World War II
World War II
World War II, or the Second World War , was a global conflict lasting from 1939 to 1945, involving most of the world's nations—including all of the great powers—eventually forming two opposing military alliances: the Allies and the Axis...
and, although the latter war in particular brought severe losses, it was still felt suitable to raise and rebuild wrecked vessels for further service. The last survivor, Goethe, returned to service in heavily rebuilt form in 1952, and for the 1953 season, there ware 14 large paddlers on the roster. In 1969 this had been reduced to 6 although the shortfall in capacity had been made up by the introduction of similar sized motor vessels. After 1974, with the withdrawal of Cecilie and Bismarck, three paddlers remained, all of which survive.

The former KD Rhein paddler Mainz serves as a floating industrial museum on the River Neckar
Neckar
The Neckar is a long river, mainly flowing through the southwestern state of Baden-Württemberg, but also a short section through Hesse, in Germany. The Neckar is a major right tributary of the River Rhine...
at Mannheim
Mannheim
Mannheim is a city in southwestern Germany. With about 315,000 inhabitants, Mannheim is the second-largest city in the Bundesland of Baden-Württemberg, following the capital city of Stuttgart....
near the Kurpfalzbrücke. Built in 1929, and operational until 1980, she was disposed of from the KD reserve fleet in 1984 and opened in her new use in 1986. Her machinery remains intact.

Goethe remains the only vessel now serving with the KD and is the last example of paddle propulsion.