Encyclopedia
Kálmán Tisza de Borosjenő (December 16, 1830 – March 23, 1902) was the Hungarian
Hungary
Hungary , officially the Republic of Hungary , is a landlocked country in Central Europe. It is situated in the Carpathian Basin and is bordered by Slovakia to the north, Ukraine and Romania to the east, Serbia and Croatia to the south, Slovenia to the southwest and Austria to the west. The...
prime minister
Prime minister
A prime minister is the most senior minister of cabinet in the executive branch of government in a parliamentary system. In many systems, the prime minister selects and may dismiss other members of the cabinet, and allocates posts to members within the government. In most systems, the prime...
between 1875 and 1890. He is credited for the formation of a consolidated Magyar government, the foundation of the new Liberal Party
Liberalism and radicalism in Hungary
This article gives an overview of liberalism and radicalism in Hungary. It is limited to liberal and radical parties with substantial support, mainly proved by having had a representation in parliament. The sign ⇒ denotes another party in that scheme...
(1875) and major economic reforms that would both save and eventually lead to a government with popular support.

At the age of 18, Kálmán Tisza witnessed one of the greatest reformations of the political arena in Hungarian history. Hungary changed from being a feudalistic government into a newly establish constitution
Constitution
A constitution is a set of fundamental principles or established precedents according to which a state or other organization is governed. These rules together make up, i.e. constitute, what the entity is...
al government that had many of the components of modern day governments. Legislation such as Public Law III abolished the Royal Chancellery and the Residential Council and replacing them with a bicameral parliament
Parliament
A parliament is a legislature, especially in those countries whose system of government is based on the Westminster system modeled after that of the United Kingdom. The name is derived from the French , the action of parler : a parlement is a discussion. The term came to mean a meeting at which...
(House of Lords
House of Lords
The House of Lords is the upper house of the Parliament of the United Kingdom. Like the House of Commons, it meets in the Palace of Westminster....
and House of Representatives
House of Representatives
House of Representatives is the name of legislative bodies in many countries and sub-national states. In some countries, the House of Representatives is the lower house of a bicameral legislature, with the corresponding upper house often called a "senate". In other countries, the House of...
). Democratic seeds were also sown with Public Law V that allowed 6.5% of the population to vote (Janos 85). And finally the union of traditional Magyar lands under Public Law VI and VII allowed for a united Hungary. These powerful reforms led to a nationalist revolt that led to the overthrow of the Habsburg
Habsburg
The House of Habsburg , also found as Hapsburg, and also known as House of Austria is one of the most important royal houses of Europe and is best known for being an origin of all of the formally elected Holy Roman Emperors between 1438 and 1740, as well as rulers of the Austrian Empire and...
monarch
Monarch
A monarch is the person who heads a monarchy. This is a form of government in which a state or polity is ruled or controlled by an individual who typically inherits the throne by birth and occasionally rules for life or until abdication...
s during the Hungarian Revolution of 1848
Hungarian Revolution of 1848
The Hungarian Revolution of 1848 was one of many of the European Revolutions of 1848 and closely linked to other revolutions of 1848 in the Habsburg areas...
. 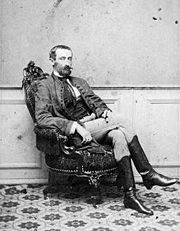 With the defeat of the Hungarians during the rebellion, much, if not all, of the reforms were revoked and replaced with a military administration under Haynau
Julius Jacob von Haynau
Julius Jacob von Haynau was an Austrian general.The illegitimate son of the landgrave of Hesse-Kassel, William I and Rebecca Richter, a Jewish woman, he entered the Austrian army as an infantry officer in 1801 and saw much service in the Napoleonic wars...
. Though the counterrevolution ended the parliamentary style government of Hungary, it did not destroy the seeds that were planted by those reforms. During 1859 and1860, after seeing the Hungarian popular support for the Italians during Austro-Italian wars, Austria began to try new constitutional experiments in Hungary. During this period Kálmán Tisza was first elected into the newly formed government. Then, in 1867, Tisza took part, with Parliament, in negotiations with Emperor
Emperor
An emperor is a monarch, usually the sovereign ruler of an empire or another type of imperial realm. Empress, the female equivalent, may indicate an emperor's wife or a woman who rules in her own right...
Franz Joseph I that led to the Ausgleich
Ausgleich
The Austro-Hungarian Compromise of 1867 established the dual monarchy of Austria-Hungary. The Compromise re-established the sovereignty of the Kingdom of Hungary, separate from and no longer subject to the Austrian Empire...
or the Compromise of 1867. The importance of this document is that it restored the "Constitutional integrity of Hungary" (Janos 90), with the exception over the powers of defense and foreign relations. These minor concessions by the Emperor soon collated and restored the powers, concerning internal affairs, back to the Hungarians. These concessions soon laid the path that allowed Tisza to rise to the position of Prime Minister. In 1875. he established the Liberal Party and was elected to the position of Prime Minister of Hungary. The efficiency of the government was quite weak and his actions during his 15 year reign mainly consisted of reforms of the government and the economy
Economy of Hungary
The economy of Hungary is a medium-sized, structurally, politically and institutionally open economy in Central Europe and is part of the European Union's single market...
.

The newly born government bureaucracy
Bureaucracy
A bureaucracy is an organization of non-elected officials of a governmental or organization who implement the rules, laws, and functions of their institution, and are occasionally characterized by officialism and red tape.-Weberian bureaucracy:...
of Hungary was inefficient and lacked a centralized government. One of the first acts performed under the premiership of Kálmán Tisza was the consolidation of power and transforming the bureaucracy into a single powerful machine: “The bureaucracy was in charge of the elections and perpetuating the liberal majority, while parliament and the party would lend an aura of legitimacy to bureaucratic policies and provide a forum to articulate bureaucratic interests” (Janos 97). Kálmán Tisza achieved consolidation of power within the government while Parliament simply acted to legitimize those actions. Consolidation of power also consisted of the reform of an incumbent parliament where members came to hold their seats regularly without challenge.


Reform of the House of Magnates in Hungary

469 members were removed under the provisions of the Parliament Act. The number of Members set to 369 members: 205 hereditary peers, 83 church dignitaries, and a new feature, 81 life members. Aristocrat
Aristocracy (class)
The aristocracy are people considered to be in the highest social class in a society which has or once had a political system of Aristocracy. Aristocrats possess hereditary titles granted by a monarch, which once granted them feudal or legal privileges, or deriving, as in Ancient Greece and India,...
ic titles were still given by the imperial power but hereditary and life peerages were to be awarded upon the advice of the Prime Minister who, in case of emergency, could seek the appointment of new members to secure the passage of a particular piece of legislation (Janos 99). These reforms allowed the position of the Prime Minister to be the single most important actor in the Hungarian political arena. These reforms by Tisza allowed him to consolidate power within the Hungarian government and also remove much of the influence extended by the Austria
Austria
Austria , officially the Republic of Austria , is a landlocked country of roughly 8.4 million people in Central Europe. It is bordered by the Czech Republic and Germany to the north, Slovakia and Hungary to the east, Slovenia and Italy to the south, and Switzerland and Liechtenstein to the...
ns. He helped to finally set in stone the shift of Hungarian political dependence away from the Austrians.

In the period between 1869 and 1875, with the founding of the new Hungarian political system, the Hungarians chose to style their economic system under a French
France
The French Republic , The French Republic , The French Republic , (commonly known as France , is a unitary semi-presidential republic in Western Europe with several overseas territories and islands located on other continents and in the Indian, Pacific, and Atlantic oceans. Metropolitan France...
model. The problem they encountered was that their current political system was more advanced in comparison to their archaic economic system. For example, taxation of the people came in the form of quasi-military campaigns that only raised taxes by 11% (Janos 106), while it embittered the rural population. Thus, these 6 years were known as a period of poor management of the economy by a failing government. When Tisza came to power in 1875, he consolidated the economy in many ways similar to his power consolidation of the government. He initiated taxation reforms that saved the state from bankruptcy
Bankruptcy
Bankruptcy is a legal status of an insolvent person or an organisation, that is, one that cannot repay the debts owed to creditors. In most jurisdictions bankruptcy is imposed by a court order, often initiated by the debtor....
. In 1887, Sándor Wekerle
Sándor Wekerle
Sándor Wekerle was a Hungarian politician who served three times as prime minister.He was born in Mór, in the comitatus of Fejér. His mother was Antónia Szép.After studying law at the University of Budapest he graduated doctor juris...
became the Minister of Finance. He worked with Tisza to develop a new tax system that focused on the taxation of land. The successes of these reforms were tremendous, even though the land tax increased by 30%, the revenues of the government increased by 330% (Janos 108). Between 1880 and 1895, public revenue doubled due to the successful tax reforms. Though the Tisza-Wekerle system saved the government from bankruptcy, the tax system proved to be too harsh and eventually prevented the rise of a domestic market for the products produced by Hungary.

The contributions made by Kálmán Tisza during his 15 year reign were quite tremendous. Although he was born during the midst of a failing Austrian Imperial Government in Hungary and he had inherited a failing Hungarian Constitutional government, he managed to turn Hungary into a modern state. He saved his country from going completely bankrupt and consolidated and created an efficient centralized government. His legacy of reform and success gave confidence to a people that were once suppressed by the Austrians and struggling to master constitutional government. However, he has also been associated with the policy of Magyarization
Magyarization
Magyarization is a kind of assimilation or acculturation, a process by which non-Magyar elements came to adopt Magyar culture and language due to social pressure .Defiance or appeals to the Nationalities Law, met...
and the imposition of Magyar hegemony over the various other linguisitic and ethnic groups in Hungary, as well as consolidating the influence of the Magyar country gentry on political life.