The Justizpalast Munich (Palace of Justice) is a palatial courthouse and administrative building in Munich
Munich
Munich The city's motto is "" . Before 2006, it was "Weltstadt mit Herz" . Its native name, , is derived from the Old High German Munichen, meaning "by the monks' place". The city's name derives from the monks of the Benedictine order who founded the city; hence the monk depicted on the city's coat...
.

It was constructed in 1890-1897 by the architect Friedrich von Thiersch in neo-baroque
Neo-baroque
The Baroque Revival or Neo-baroque was an architectural style of the late 19th century. The term is used to describe architecture which displays important aspects of Baroque style, but is not of the Baroque period proper—i.e., the 17th and 18th centuries.Some examples of Neo-baroque architecture:*...
style at the west side of the Karlsplatz (Stachus). The building of the Gründerzeit
Gründerzeit
' refers to the economic phase in 19th century Germany and Austria before the great stock market crash of 1873. At this time in Central Europe the age of industrialisation was taking place, whose beginnings were found in the 1840s...
is dominated by a glass dome (67 meters). It houses the Bavarian Department of Justice and the District Court I of Munich.

The People's Court sentenced the members of the White Rose
White Rose
The White Rose was a non-violent/intellectual resistance group in Nazi Germany, consisting of students from the University of Munich and their philosophy professor...
in the Justizpalast in 1943. Room 253 is today a memorial place. 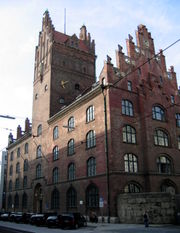 Since the huge building turned out to be too small Friedrich von Thiersch constructed already in 1905 at the west side of the building the so-called New Justizpalast. This time he created the courthouse in strong contrast to the Justizpalast in red brick stone in northern neo-gothic style with two towers. The New Justizpalast houses the Bavarian Constitutional Court and the Higher Regional Court.
The source of this article is wikipedia, the free encyclopedia.  The text of this article is licensed under the GFDL.