Encyclopedia
Jumu'ah is a congregational prayer (salah) that Muslim
Muslim
A Muslim, also spelled Moslem, is an adherent of Islam, a monotheistic, Abrahamic religion based on the Quran, which Muslims consider the verbatim word of God as revealed to prophet Muhammad. "Muslim" is the Arabic term for "submitter" .Muslims believe that God is one and incomparable...
s hold every Friday, just after noon
Noon
Noon is usually defined as 12 o'clock in the daytime. The word noon is also used informally to mean midday regarding the location of the sun not the middle of a persons day. Although this is a time around the middle of the day when people in many countries take a lunch break...
in lieu of dhuhr
Dhuhr
The dhuhr prayer is the prayer after midday Performed daily by practicing Muslims, it is the second of the five daily prayers...
. It is mentioned in the Qur'an
Qur'an
The Quran , also transliterated Qur'an, Koran, Alcoran, Qur’ān, Coran, Kuran, and al-Qur’ān, is the central religious text of Islam, which Muslims consider the verbatim word of God . It is regarded widely as the finest piece of literature in the Arabic language...
as:
The jumu'ah prayer is half the dhuhr prayer, for convenience, preceded by a khutbah (a sermon as a technical replacement of the two reduced rakaʿāt of the ordinary dhuhr prayer), and followed by a congregational prayer, led by the imam
Imam
An imam is an Islamic leadership position, often the worship leader of a mosque and the Muslim community. Similar to spiritual leaders, the imam is the one who leads Islamic worship services. More often, the community turns to the mosque imam if they have a religious question...
. In most cases the khaṭīb
Khatib
Khatib or khateeb is an Arabic term used to describe a person who delivers the sermon , during the Friday prayer and Eid prayers....
also serves as the imam. Attendance is strictly incumbent upon all adult males who are legal residents of the locality. Salaat-ul-Juma'a in the presence of a congregation is not obligatory for female Muslims.

The muezzin
Muezzin
A muezzin , or muzim, is the chosen person at a mosque who leads the call to prayer at Friday services and the five daily times for prayer from one of the mosque's minarets; in most modern mosques, electronic amplification aids the muezzin in his task.The professional muezzin is chosen for his...
makes the call to prayer, called the adhan
Adhan
The adhān is the Islamic call to prayer, recited by the muezzin at prescribed times of the day. The root of the word is meaning "to permit"; another derivative of this word is , meaning "ear"....
, usually 15-20 minutes prior to the start of Jum'ah. When the khaṭīb takes his place on the minbar
Minbar
A minbar is a pulpit in the mosque where the imam stands to deliver sermons or in the Hussainia where the speaker sits and lectures the congregation...
, a second adhan is made. The khaṭīb is supposed to deliver two sermons, stopping and sitting briefly between them. In practice, the first sermon is longer and contains most of the content. The second sermon is very brief and concludes with a dua
Dua
In the terminology of Islam, Duʿāʾ Plural: Dow'āt literally meaning invocation, is an act of supplication. The term is derived from an Arabic word meaning to 'call out' or to 'summon', and Muslims regard this as a profound act of worship. This is when Muslim people from all over connect with God...
, after which the muezzin calls the iqama
Iqama
The word iqamah or ikamet refers to the second call to Islamic Prayer, given immediately before the prayer begins. Generally speaking, the iqamah is given more quickly and in a more monotone fashion, as compared to the adhan, as it is addressed to those already in the mosque rather than a...
. This signals the start of the main two rak'at prayer of Jumu'ah. 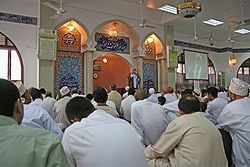 The communal prayers have higher compliance of worshippers, as compared to the non-communal ritual prayers. In Turkey
Turkey
Turkey , known officially as the Republic of Turkey , is a Eurasian country located in Western Asia and in East Thrace in Southeastern Europe...
for example, the ritual prayers are performed regularly by 44%, whereas Friday prayers were regularly attended by 56% (25% responded that they sometimes attended and 19% that they never did).

From hadith
Hadith
The term Hadīth is used to denote a saying or an act or tacit approval or criticism ascribed either validly or invalidly to the Islamic prophet Muhammad....
:
Muslim ibn al-Hajjaj Nishapuri relates that the Islamic prophet Muhammad used to read Surah 87 (Al-Ala
Al-Ala
Sūrat al-Aʿlā is the 87th sura of the Qur'an with 19 ayat. Al-Ala describes the Islamic view of existence, the Oneness of Allah, and Divine revelation, additionally mentioning rewards and punishments. Mankind often hides things from each other and from themselves as well. The sura reminds us that...
) and Surah 88, (Al-Ghashiya
Al-Ghashiya
Sūrat al-Ghāshiya is the 88th sura of the Qur'an with 26 ayat. The sura's topics are Paradise, Hell and the miracle of creation of all things by Allah.-Arabic Verses: بِسۡمِ اللّٰہِ الرَّحۡمٰنِ الرَّحِیۡمِ...
), in Eid Prayer
Eid Prayer
The Eid prayer was prescribed in the first year after the hijra. It is Wajib and Muhammad always performed these prayers.-Procedure:...
s and also in Friday prayers. If one of the festivals fell on a Friday, the Prophet would have made sure to read these two Surahs in the prayers.

A person who goes to Friday prayer and remains quiet during the sermon is said to have his sins between that Friday and last forgiven.