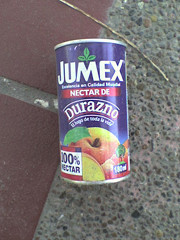 The origins of Jumex lie with Fruit and Juice Packing, Inc. (Empacadora de Frutas y Jugos, S.A.) and its Frugo brand, which were founded on April 27, 1961. The first flavors were apricot
Apricot
The apricot, Prunus armeniaca, is a species of Prunus, classified with the plum in the subgenus Prunus. The native range is somewhat uncertain due to its extensive prehistoric cultivation.- Description :...
, apple
Apple
The apple is the pomaceous fruit of the apple tree, species Malus domestica in the rose family . It is one of the most widely cultivated tree fruits, and the most widely known of the many members of genus Malus that are used by humans. Apple grow on small, deciduous trees that blossom in the spring...
, guava
Guava
Guavas are plants in the myrtle family genus Psidium , which contains about 100 species of tropical shrubs and small trees. They are native to Mexico, Central America, and northern South America...
, mango
Mango
The mango is a fleshy stone fruit belonging to the genus Mangifera, consisting of numerous tropical fruiting trees in the flowering plant family Anacardiaceae. The mango is native to India from where it spread all over the world. It is also the most cultivated fruit of the tropical world. While...
, pear
Pear
The pear is any of several tree species of genus Pyrus and also the name of the pomaceous fruit of these trees. Several species of pear are valued by humans for their edible fruit, but the fruit of other species is small, hard, and astringent....
, plum
Plum
A plum or gage is a stone fruit tree in the genus Prunus, subgenus Prunus. The subgenus is distinguished from other subgenera in the shoots having a terminal bud and solitary side buds , the flowers in groups of one to five together on short stems, and the fruit having a groove running down one...
and tamarind
Tamarind
Tamarind is a tree in the family Fabaceae. The genus Tamarindus is monotypic .-Origin:...
, today several additional flavors and blends are offered under its brands. The actual Jumex brand and its "little blue can" was introduced in 1964. The current company associated with Jumex and other popular beverage brands is the Jumex Group, which consists of Frugosa, Botemex, Jugomex, Alijumex, Vilore Services Corp., Vilore Services, and Vilore Foods, Inc. (U.S.) http://www.jumex.com.mx/BacercaJumex/fsAcerca.html Jumex is associated with the Mexican
Mexico
The United Mexican States , commonly known as Mexico , is a federal constitutional republic in North America. It is bordered on the north by the United States; on the south and west by the Pacific Ocean; on the southeast by Guatemala, Belize, and the Caribbean Sea; and on the east by the Gulf of...
foods company La Costeña
La Costeña (food company)
Conservas La Costeña, usually called La Costeña, is a Mexican brand dedicated to the canned products market. It was founded in 1923 by Vicente López Recines. The company has become an important brand inside and outside Mexico. Nowadays, La Costeña sells its products in almost all the Mexican...
.
The source of this article is wikipedia, the free encyclopedia.  The text of this article is licensed under the GFDL.