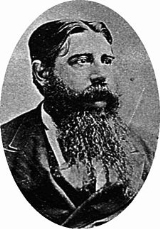 Born in London, Vogel received his early education at University College School
University College School
University College School, generally known as UCS, is an Independent school charity situated in Hampstead, north west London, England. The school was founded in 1830 by University College London and inherited many of that institution's progressive and secular views...
in Hampstead
Hampstead
Hampstead is an area of London, England, north-west of Charing Cross. Part of the London Borough of Camden in Inner London, it is known for its intellectual, liberal, artistic, musical and literary associations and for Hampstead Heath, a large, hilly expanse of parkland...
, London. He later studied chemistry
Chemistry
Chemistry is the science of matter, especially its chemical reactions, but also its composition, structure and properties. Chemistry is concerned with atoms and their interactions with other atoms, and particularly with the properties of chemical bonds....
and metallurgy
Metallurgy
Metallurgy is a domain of materials science that studies the physical and chemical behavior of metallic elements, their intermetallic compounds, and their mixtures, which are called alloys. It is also the technology of metals: the way in which science is applied to their practical use...
at the Royal School of Mines
Royal School of Mines
Royal School of Mines comprises the departments of Earth Science and Engineering, and Materials at Imperial College London.- History :The Royal School of Mines was established in 1851, as the Government School of Mines and Science Applied to the Arts...
(later part of Imperial College London
Imperial College London
Imperial College London is a public research university located in London, United Kingdom, specialising in science, engineering, business and medicine...
). He emigrated to Victoria, Australia in 1852, then moved to Otago
Otago
Otago is a region of New Zealand in the south of the South Island. The region covers an area of approximately making it the country's second largest region. The population of Otago is...
in 1861, where he become a journalist for the Otago Witness
Otago Witness
The Otago Witness was a prominent newspaper in the early years of the European settlement of New Zealand, produced in Dunedin, the provincial capital of Otago. Inaugurated in 1851, three years after the founding of the city, the Witness was originally a four-page fortnightly paper, becoming a...
. In November 1861 he founded the Otago Daily Times
Otago Daily Times
The Otago Daily Times is a newspaper published by Allied Press Ltd in Dunedin, New Zealand.-History:Originally styled The Otago Daily Times, the ODT was first published on November 15, 1861. It is New Zealand's oldest surviving daily newspaper - Christchurch's The Press, six months older, was a...
and became its first editor.

In 1863 he was elected a member of the New Zealand House of Representatives, and on retiring from the provincial government in 1869 he joined the Fox ministry as colonial treasurer, afterward becoming successively postmaster-general, commissioner of customs, and telegraph commissioner. The Fox ministry having been forced to resign, Vogel carried a vote of no confidence in their successors, and in October 1872, returned to power as leader in the Lower House, colonial treasurer and postmaster-general. He represented several electorates throughout the colony: Dunedin and Suburbs North
Dunedin and Suburbs North
Dunedin and Suburbs North was a parliamentary electorate in the city of Dunedin in Otago, New Zealand from 1863 to 1866. It was a multi-member electorate.-History:...
1863–1866, Goldfields in Otago 1866–1870, Auckland East
Auckland East
Auckland East was a New Zealand electorate, situated in the east of Auckland.-History:The Auckland East electorate was established for the 1860-1861 elections, when the Auckland electorate was split in half. It consisted of most of modern Auckland's central business district...
1871–1875, Wanganui
Whanganui (New Zealand electorate)
Whanganui is a New Zealand parliamentary electorate. It was first established in 1855 for the 2nd Parliament and has existed continuously since then.It is currently held by Chester Borrows MP.-Population centres:...
1876 (resigned) and Christchurch North
Christchurch North (New Zealand electorate)
Christchurch North is a former New Zealand Parliamentary electorate.The electorate was in the northern suburbs of Christchurch, New Zealand.-History:The electorate existed three times:*1881 to 1890;*1905 to 1946;...
1884–1889 (resigned).

He was premier from 1873 to 1875 and again in 1876. From 1876 to 1881 he was agent-general for New Zealand in London, and in 1884 was again a member of the government of the colony. During his political career, Vogel worked for reconciliation with Māori, an effort generally regarded to be successful. In 1887, he introduced the first Women's Suffrage
Women's suffrage
Women's suffrage or woman suffrage is the right of women to vote and to run for office. The expression is also used for the economic and political reform movement aimed at extending these rights to women and without any restrictions or qualifications such as property ownership, payment of tax, or...
Bill to Parliament, although suffrage was not granted until 1893. He was knighted in 1875. He finally gave up colonial office in 1887, from which date he lived in England.

He is best remembered for is his "Great Public Works
Public works
Public works are a broad category of projects, financed and constructed by the government, for recreational, employment, and health and safety uses in the greater community...
" scheme of the 1870s. Before 1870, New Zealand was a country largely dominated by provincial interests and pork-barrel politics. After Vogel, as colonial treasurer, proposed borrowing the massive sum of 10 million pounds, New Zealand developed significant infrastructure of roads, railways
Rail transport in New Zealand
Rail transport in New Zealand consists of a network of gauge railway lines in both the North and South Islands. Rail services are focused primarily on freight, particularly bulk freight, with limited passenger services on some lines...
and communication, all administered by central government. This ultimately led to the end of provincial government
Provinces of New Zealand
The Provinces of New Zealand existed from 1841 until 1876 as a form of sub-national government. They were replaced by counties, which were themselves replaced by districts.Following abolition, the provinces became known as provincial districts...
in 1876.

Vogel is reputed to be the first New Zealander to write a science fiction novel, Anno Domini 2000 – A Woman's Destiny, published in 1889. It anticipated a utopian world where women held many positions of authority, and in fact New Zealand became the first country to give women the vote
Women's suffrage in New Zealand
Women's suffrage in New Zealand was an important political issue in the late 19th century. Of countries presently independent, New Zealand was the first to give women the vote in modern times....
, and from 1998 to 2008 continuously had a female Prime Minister, while for a short period (2005–2006) all five highest government offices (Queen, Governor-General
Governor-General
A Governor-General, is a vice-regal person of a monarch in an independent realm or a major colonial circonscription. Depending on the political arrangement of the territory, a Governor General can be a governor of high rank, or a principal governor ranking above "ordinary" governors.- Current uses...
, Prime Minister, Speaker of the House and Chief Justice
Chief Justice
The Chief Justice in many countries is the name for the presiding member of a Supreme Court in Commonwealth or other countries with an Anglo-Saxon justice system based on English common law, such as the Supreme Court of Canada, the Constitutional Court of South Africa, the Court of Final Appeal of...
) were simultaneously held by women.