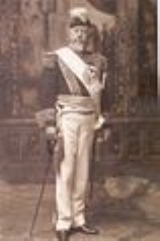 Julio Roca was born in the northwestern city of San Miguel de Tucumán in 1843 into a prominent local family. He graduated from the National College in Concepción del Uruguay
Concepción del Uruguay
Concepción del Uruguay is a city in Argentina.It is located in the Entre Ríos province, on the western shore of the Uruguay River, some 320 kilometers north from Buenos Aires. Its population is about 65,000 inhabitants .-History:...
, Entre Ríos
Entre Ríos Province
Entre Ríos is a northeastern province of Argentina, located in the Mesopotamia region. It borders the provinces of Buenos Aires , Corrientes and Santa Fe , and Uruguay in the east....
. Before he was 15, Roca joined the army of the Argentine Confederation, on 19 March 1858. While still an adolescent, he went to fight as a junior artillery officer in the struggle between Buenos Aires and the interior provinces, first on the side of the provinces and later on behalf of the capital. He also fought in the War of the Triple Alliance
War of the Triple Alliance
The Paraguayan War , also known as War of the Triple Alliance , was a military conflict in South America fought from 1864 to 1870 between Paraguay and the Triple Alliance of Argentina, Brazil, and Uruguay...
against Paraguay between 1865 and 1870. Roca rose to the rank of colonel serving in the war to suppress the revolt of Ricardo López Jordán in Entre Ríos. President Nicolás Avellaneda
Nicolás Avellaneda
Nicolás Remigio Aurelio Avellaneda Silva was an Argentine politician and journalist, and president of Argentina from 1874 to 1880. Avellaneda's main projects while in office were banking and education reform, leading to Argentina's economic growth...
later promoted him to General after his victory over rebel general José M. Arredondo in the battle of Santa Rosa, leading the loyalist forces.

He devised a "tentacle" move, with waves of 6,000 men cavalry units stemming coordinately from Mendoza
Mendoza, Argentina
Mendoza is the capital city of Mendoza Province, in Argentina. It is located in the northern-central part of the province, in a region of foothills and high plains, on the eastern side of the Andes. As of the , Mendoza's population was 110,993...
, Córdoba
Córdoba, Argentina
Córdoba is a city located near the geographical center of Argentina, in the foothills of the Sierras Chicas on the Suquía River, about northwest of Buenos Aires. It is the capital of Córdoba Province. Córdoba is the second-largest city in Argentina after the federal capital Buenos Aires, with...
, Santa Fé
Santa Fe, Argentina
Santa Fe is the capital city of province of Santa Fe, Argentina. It sits in northeastern Argentina, near the junction of the Paraná and Salado rivers. It lies opposite the city of Paraná, to which it is linked by the Hernandarias Subfluvial Tunnel. The city is also connected by canal with the...
and Buenos Aires
Buenos Aires
Buenos Aires is the capital and largest city of Argentina, and the second-largest metropolitan area in South America, after São Paulo. It is located on the western shore of the estuary of the Río de la Plata, on the southeastern coast of the South American continent...
on July 1878 and April 1879 respectively, with an official toll of nearly 1,250 Native American
Indigenous peoples of the Americas
The indigenous peoples of the Americas are the pre-Columbian inhabitants of North and South America, their descendants and other ethnic groups who are identified with those peoples. Indigenous peoples are known in Canada as Aboriginal peoples, and in the United States as Native Americans...
s killed and 3,000 taken as prisoners.

Due to his military successes and the massive territorial gains linked with them, Roca was put forward as a successor to President Avellaneda. In October 1879 he gave up his military career to get ready for the election campaign. When Carlos Tejedor instigated a revolution in 1880 Roca was one of the key figures in the federalization
Federalism
Federalism is a political concept in which a group of members are bound together by covenant with a governing representative head. The term "federalism" is also used to describe a system of the government in which sovereignty is constitutionally divided between a central governing authority and...
of the country and the naming of Buenos Aires as the capital of Argentina, settling the question of central rule.

After triumphing over Tejedor, Roca took over the presidency on 12 October 1880. Under his mandate the so called "laicist laws" (Leyes Laicas) were passed, which nationalized a series of functions that previously were under the control of the Church. He also created the so called Registro Civil, an index of all births, deaths and marriages. President Roca also made primary education free of charge by nationalizing education institutions run by the Church. This led to a break in relations with the Vatican. Under Roca's rule the economy became state controlled and he presided over an era of rapid economic development fueled by large scale European immigration, railway construction, and agricultural exports. However, financial speculation and government corruption marred his administration. In May 1886 Roca was the subject of a failed assassination attempt.

Roca did not participate in the 1890 revolution, which was instigated by Leandro N. Alem and Bartolomé Mitre
Bartolomé Mitre
Bartolomé Mitre Martínez was an Argentine statesman, military figure, and author. He was the President of Argentina from 1862 to 1868.-Life and times:...
(Unión Cívica, later Unión Cívica Radical). However, he was pleased in the resulting weakness of Miguel Juárez Celman. Roca himself had put forward Juárez Celman
Juárez Celman
Miguel Angel Juárez Celman was President of Argentina from 12 October 1886 to 6 August 1890. A lawyer and politician, his career was defined by the influence of his kinsman, Julio Argentino Roca, whom propelled him into a legislative career...
as his successor, who also happened to be his brother-in-law. However, Celman distanced himself from Roca and reprivatized large sectors of the economy in a corrupt fashion.

After his first presidency Roca became a senator and Minister of the Interior under Carlos Pellegrini
Carlos Pellegrini
Carlos Enrique José Pellegrini Bevans was President of Argentina from 6 August 1890 to 12 October 1892....
. After President Luis Sáenz Peña
Luis Sáenz Peña
Luis Sáenz Peña was a lawyer and President of Argentina.He graduated in law from the University of Buenos Aires, and participated in the constitutional assembly of 1860. He was a number of times a national deputy and senator. In 1882 he occupied a seat on the Supreme Court of the Province of...
resigned in January 1895, José Evaristo Uriburu
José Evaristo Uriburu
José Evaristo de Uriburu y Álvarez de Arenales was President of Argentina from 23 January 1895 to 12 October 1898....
took over the presidency, during which Roca was President of the Senate. Because of this, Roca again assumed the duties of President between 28 October 1895 and 8 February 1896, when Uriburu was ill.

In the middle of 1897 the Partido Autonomista Nacional party put forward Roca as a presidential candidate once more. Unopposed, he was able to begin a second regular time in office on 12 October 1898. During his second presidency, the so called Ley de Residencia law was passed, which made it possible to expel Argentina's trade union leaders. During this presidency military service was introduced in 1901 and a border dispute with Chile was settled in 1902. Luis Drago, Roca’s foreign minister, articulated the Drago Doctrine
Drago Doctrine
The Drago Doctrine was announced in 1902 by the Argentine Minister of Foreign Affairs Luis María Drago. Extending the Monroe Doctrine, it set forth the policy that no foreign power, including the United States, could use force against an American nation to collect debt...
of 1902 asserting that foreign powers could not collect public debts from sovereign American states by armed force or occupation of territory. Roca's second term ended in 1904.