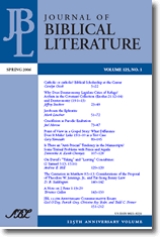 "JBL has a moving window of Open Access. Aside from the current issue, the past three years of JBL are openly available to the public in PDF form on the SBL website. Previous issues, back to 1881, are available in the JSTOR Arts and Sciences III collection."

The journal was originally published under the title Journal of the Society of Biblical Literature and Exegesis. The current name was adopted with volume 9 (1890).

At the fourth meeting, on 29 December 1881, the SBL council voted to print 500 copies of a journal, including the full text of papers read at the society's annual June meetings.

In 1916, the SBL secretary passed on to the members a communication, from the Third Assistant Postmaster General of the United States, refusing to give the JBL the second-class rate discount for scholarly journals, "on the ground that it was not scientific."

"The Journal of the Society for Biblical Literature in the United States was published in Leipzig through World War I down to the Nazi period—yet for the most part this feature showed up only when it became a problem for delivery after Germany began to be devastated after 1916."

Samuel Sharpe
Samuel Sharpe (scholar)
Samuel Sharpe was an English Unitarian Egyptologist and translator of the Bible.-Life:He was the second son of Sutton Sharpe , brewer, by his second wife, Maria , and was born in King Street, Golden Square, London, on 8 March 1799, baptised at St. James's, Piccadilly...
, an English ordained minister and egyptologist
Egyptology
Egyptology is the study of ancient Egyptian history, language, literature, religion, and art from the 5th millennium BC until the end of its native religious practices in the AD 4th century. A practitioner of the discipline is an “Egyptologist”...
was editor of a journal also called Journal of Bibilical Literature, published from London prior to the establishment of SBL and its journal.