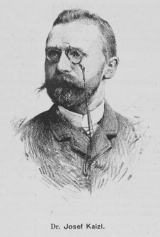 Encyclopedia
Josef Kaizl was a Czech professor and politician in the Austria-Hungary Empire
Austria-Hungary
Austria-Hungary , more formally known as the Kingdoms and Lands Represented in the Imperial Council and the Lands of the Holy Hungarian Crown of Saint Stephen, was a constitutional monarchic union between the crowns of the Austrian Empire and the Kingdom of Hungary in...
. He was a member of the Imperial Council
Reichsrat (Austria)
The Imperial Council of Austria from 1867 to 1918 was the parliament of the Cisleithanian part of the Austro-Hungarian Empire. It was a bicameral legislature, consisting of the Herrenhaus and the Abgeordnetenhaus...
, and finance minister between 1898 and 1899.

Kaizl studied law at the Charles University in Prague
Charles University in Prague
Charles University in Prague is the oldest and largest university in the Czech Republic. Founded in 1348, it was the first university in Central Europe and is also considered the earliest German university...
, and economics at University of Strasbourg
University of Strasbourg
The University of Strasbourg in Strasbourg, Alsace, France, is the largest university in France, with about 43,000 students and over 4,000 researchers....
, where he studied under Gustav von Schmoller
Gustav von Schmoller
Gustav von Schmoller was the leader of the "younger" German historical school of economics.-Life:Schmoller was born in Heilbronn. His father was a Württemberg civil servant. Young Schmoller studied Staatswissenschaften at the University of Tübingen...
and Georg Friedrich Knapp
Georg Friedrich Knapp
Georg Friedrich Knapp was a German economist and founder of the chartalist school of monetary theory, which takes the statist stance on money, claiming that it must have no intrinsic value and strictly be used as governmentally-issued token i.e...
. He started teaching political economy at the Charles University in 1879, becoming a full professor in 1883, in the then Czech section of the university. He was closely associated with Jan Gebauer
Jan Gebauer
Jan Gebauer was a significant Czech expert on Czech studies and one of the most renowned Czech scientists of all times. His scientific work was influenced by the methods of positivism.-Biography:...
and Tomáš Masaryk
Tomáš Masaryk
Tomáš Garrigue Masaryk , sometimes called Thomas Masaryk in English, was an Austro-Hungarian and Czechoslovak politician, sociologist and philosopher, who as an eager advocate of Czechoslovak independence during World War I became the founder and first President of Czechoslovakia, also was...
, who later became the first president of the Czechoslovak Republic.

In 1885, Kaizl would be elected to the Imperial Council for the Old Czechs, but returned his seat in 1887. He then worked with Masaryk on the expanding the Realist philosophical movement
Czech Realist Party
The Realist Party was a Czech political party in Austria-Hungary, founded in 1889 by Tomáš Masaryk, Karel Kramář and Josef Kaizl. The following year the party joined the Young Czechs....
. They would join the Young Czechs
Young Czech Party
The Young Czech Party was formed in 1874. It initiated the democratization of Czech political parties and led to the establishment of the political base of Czechoslovakia.- Background :...
in 1890. In 1891 and 1895, the Young Czechs were highly successful in elections; this political power was transferred in Kaizl receiving the post of finance minister in the Count Thun government, the highest political position a Czech would ever come to hold in Austria-Hungary
Austria-Hungary
Austria-Hungary , more formally known as the Kingdoms and Lands Represented in the Imperial Council and the Lands of the Holy Hungarian Crown of Saint Stephen, was a constitutional monarchic union between the crowns of the Austrian Empire and the Kingdom of Hungary in...
.