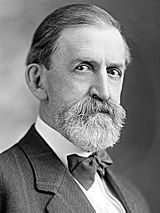 Encyclopedia
John Worth Kern was a Democratic United States Senator from Indiana
Indiana
Indiana is a US state, admitted to the United States as the 19th on December 11, 1816. It is located in the Midwestern United States and Great Lakes Region. With 6,483,802 residents, the state is ranked 15th in population and 16th in population density. Indiana is ranked 38th in land area and is...
. While the title was not official, he is considered to be the first Senate Majority leader
Party leaders of the United States Senate
The Senate Majority and Minority Leaders are two United States Senators who are elected by the party conferences that hold the majority and the minority respectively. These leaders serve as the chief Senate spokespeople for their parties and manage and schedule the legislative and executive...
(and in turn, the first Senate Democratic Leader), while serving concurrently as Chairman of the Senate Democratic Caucus.

Born in Alto, Indiana
Alto, Indiana
Alto is an unincorporated town in Harrison Township, Howard County, Indiana, United States. It is part of the Kokomo, Indiana Metropolitan Statistical Area. Alto will become part of Kokomo through annexation....
, Kern studied law at the University of Michigan
University of Michigan
The University of Michigan is a public research university located in Ann Arbor, Michigan in the United States. It is the state's oldest university and the flagship campus of the University of Michigan...
. He began to practice law in Kokomo, Indiana
Kokomo, Indiana
Kokomo is a city in and the county seat of Howard County, Indiana, United States, Indiana's 13th largest city. It is the principal city of the Kokomo, Indiana Metropolitan Statistical Area, which includes all of Howard and Tipton counties....
, where he served as city attorney (1871–1884). He was elected to the Indiana Senate
Indiana Senate
The Indiana Senate is the upper house of the Indiana General Assembly, the state legislature of the U.S. state of Indiana. The Senate is composed of 50 members representing an equal number of constituent districts. Senators serve four-year terms without term limits...
in 1893, serving for four years, serving at the same time as assistant U.S. Attorney
United States Attorney
United States Attorneys represent the United States federal government in United States district court and United States court of appeals. There are 93 U.S. Attorneys stationed throughout the United States, Puerto Rico, the U.S. Virgin Islands, Guam, and the Northern Mariana Islands...
for Indiana. From 1897 to 1901 he was city solicitor of Indianapolis
Indianapolis
Indianapolis is the capital of the U.S. state of Indiana, and the county seat of Marion County, Indiana. As of the 2010 United States Census, the city's population is 839,489. It is by far Indiana's largest city and, as of the 2010 U.S...
, and was the unsuccessful Democratic candidate for Governor of Indiana
Governor of Indiana
The Governor of Indiana is the chief executive of the state of Indiana. The governor is elected to a four-year term, and responsible for overseeing the day-to-day management of the functions of many agencies of the Indiana state government. The governor also shares power with other statewide...
in 1900 and 1904. After these defeats, he returned to his law practice, travelled to Europe, and spent six months at a sanatorium in Asheville, North Carolina, for reasons of health.

After the election of 1912, which featured the election of Woodrow Wilson, the return of a Democratic majority to the House, and the election of another eleven progressive Democrats to the Senate combined with Kern's national stature as a progressive, his skills at conciliation, and his personal popularity resulted in his unanimous election as majority leadership in the Senate. As leader, he played a key role in organizing the Senate and his party. He worked closely with the president and often visited with him privately. He kept the peace and promoted unity that helped propel Wilson's initiatives through the Senate. These included tariff reform, the nation's first income tax (as permitted by the 16th Amendment), the passage of the Federal Reserve Act, enactment of antitrust laws, and the establishment of the Federal Trade Commission.

A champion of the direct election of senators, Kern was defeated for reelection in 1916. At Bryan's urging, Wilson considered him for appointment to high public office, but Kern died on August 17, 1917 in Asheville, North Carolina
Asheville, North Carolina
Asheville is a city in and the county seat of Buncombe County, North Carolina, United States. It is the largest city in Western North Carolina, and the 11th largest city in North Carolina. The City is home to the United States National Climatic Data Center , which is the world's largest active...
, nine months after leaving the Senate. He was originally interred on the Kern estate near Hollins, Virginia
Hollins, Virginia
Hollins is a census-designated place in Botetourt and Roanoke counties in the U.S. state of Virginia. Hollins covers much of the area known locally as "North County". The population was 14,309 at the 2000 census. It is part of the Roanoke Metropolitan Statistical Area...
and then interred in Crown Hill Cemetery
Crown Hill Cemetery
Crown Hill Cemetery, located at 700 West 38th Street in Indianapolis, is the third largest non-governmental cemetery in the United States at . It contains of paved road, over 150 species of trees and plants, over 185,000 graves, and services roughly 1,500 burials per year. It sits on the highest...
, Indianapolis, Indiana
Indianapolis, Indiana
Indianapolis is the capital of the U.S. state of Indiana, and the county seat of Marion County, Indiana. As of the 2010 United States Census, the city's population is 839,489. It is by far Indiana's largest city and, as of the 2010 U.S...
twelve years later.
The source of this article is wikipedia, the free encyclopedia.  The text of this article is licensed under the GFDL.