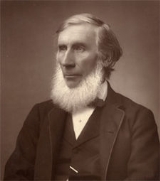 Overview
John Tyndall FRS (2 August 1820 – 4 December 1893) was a prominent Irish
Irish
Irish may refer to:*Irish cuisine* Ireland, an island in north-western Europe, on which are located:** Northern Ireland, a constituent country of the United Kingdom** Republic of Ireland, a sovereign state...
19th century physicist. His initial scientific fame arose in the 1850s from his study of diamagnetism
Diamagnetism
Diamagnetism is the property of an object which causes it to create a magnetic field in opposition to an externally applied magnetic field, thus causing a repulsive effect. Specifically, an external magnetic field alters the orbital velocity of electrons around their nuclei, thus changing the...
. Later he studied thermal radiation
Thermal radiation
Thermal radiation is electromagnetic radiation generated by the thermal motion of charged particles in matter. All matter with a temperature greater than absolute zero emits thermal radiation....
, and produced a number of discoveries about processes in the atmosphere
Atmosphere
An atmosphere is a layer of gases that may surround a material body of sufficient mass, and that is held in place by the gravity of the body. An atmosphere may be retained for a longer duration, if the gravity is high and the atmosphere's temperature is low...
. Tyndall published seventeen books, which brought state-of-the-art 19th century experimental physics
Experimental physics
Within the field of physics, experimental physics is the category of disciplines and sub-disciplines concerned with the observation of physical phenomena in order to gather data about the universe...
to a wider audience. From 1853 to 1887 he was professor of physics at the Royal Institution
Royal Institution
The Royal Institution of Great Britain is an organization devoted to scientific education and research, based in London.-Overview:...
of Great Britain, where he became the successor to positions held by Michael Faraday
Michael Faraday
Michael Faraday, FRS was an English chemist and physicist who contributed to the fields of electromagnetism and electrochemistry....
.
Tyndall was born in Leighlinbridge
Leighlinbridge
Leighlinbridge is a village on the River Barrow in County Carlow, Ireland. The N9 National primary route once passed through the village, which was by-passed in the 1980s. It now lies on the R705 regional road....
, County Carlow
County Carlow
County Carlow is a county in Ireland. It is part of the South-East Region and is also located in the province of Leinster. It is named after the town of Carlow, which lies on the River Barrow. Carlow County Council is the local authority for the county...
, Ireland
Ireland
Ireland is an island to the northwest of continental Europe. It is the third-largest island in Europe and the twentieth-largest island on Earth...
.

Knowledge once gained casts a faint light beyond its own immediate boundaries.

On the Methods and Tendencies of Physical Investigation, p. 7

Life is a wave, which in no two consecutive moments of its existence is composed of the same particles.

The mind of man may be compared to a musical instrument with a certain range of notes, beyond which in both directions we have an infinitude of silence.

It is as fatal as it is cowardly to blink facts because they are not to our taste.

Superstition may be defined as constructive religion which has grown incongruous with intelligence.

Religious feeling is as much a verity as any other part of human consciousness; and against it, on the subjective side, the waves of science beat in vain.