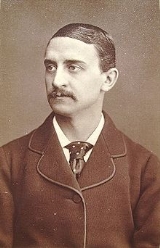 Overview
Sir John Hare born John Fairs, was an English actor and manager
Actor-manager
An actor-manager is a leading actor who sets up their own permanent theatrical company and manages the company's business and financial arrangements, sometimes taking over the management of a theatre, to perform plays of their own choice and in which they will usually star...
of the Garrick Theatre
Garrick Theatre
The Garrick Theatre is a West End theatre, located on Charing Cross Road, in the City of Westminster. It opened on 24 April 1889 with The Profligate, a play by Arthur Wing Pinero. In its early years, it appears to have specialised in the performance of melodrama, and today the theatre is a...
in London from 1889 to 1895.
Hare was born in Giggleswick
Giggleswick
Giggleswick is a village and civil parish in the Craven district of North Yorkshire, England near the town of Settle. It is the site of Giggleswick School.-Origin of name:A Dictionary of British Place Names contains the entry:...
in Yorkshire
Yorkshire
Yorkshire is a historic county of northern England and the largest in the United Kingdom. Because of its great size in comparison to other English counties, functions have been increasingly undertaken over time by its subdivisions, which have also been subject to periodic reform...
and was educated at Giggleswick school. He made his first appearance on the stage at Liverpool
Liverpool
Liverpool is a city and metropolitan borough of Merseyside, England, along the eastern side of the Mersey Estuary. It was founded as a borough in 1207 and was granted city status in 1880...
in 1864, coming to London in 1865, and acting for ten years with the Bancrofts
Squire Bancroft
Sir Squire Bancroft , born Squire White Butterfield, was an English actor-manager. He and his wife Effie Bancroft are considered to have instigated a new form of drama known as 'drawing-room comedy' or 'cup and saucer drama', owing to the realism of their stage sets.-Early life and career:Bancroft...
at the Prince of Wales's Theatre. He soon built a reputation, particularly in T. W. Robertson
Thomas William Robertson
Thomas William Robertson , usually known professionally as T. W. Robertson, was an Anglo-Irish dramatist and innovative stage director best known for a series of realistic or naturalistic plays produced in London in the 1860s that broke new ground and inspired playwrights such as W.S...
's comedies, and in 1875 became manager of the Court Theatre
Court Theatre
Court Theatre or Royal Court Theatre may refer to:*Court Theatre , Chicago, Illinois*Court Theatre , a theatre company in Christchurch, New Zealand*Court Theatre of Buda, Budapest, Hungary...
.