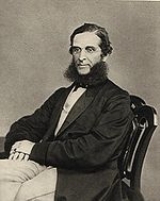 Encyclopedia
Sir John Evans, KCB
KCB
KCB is a Three-letter acronym that may stand for:* Kekchi Council of Belize* Kenya Commercial Bank Group** Kenya Commercial Bank** Kenya Commercial Bank ** Kenya Commercial Bank * Klezmer Conservatory Band...
, FRS
FRS
-Education:* Frontier Regional School, a regional school located in South Deerfield, Massachusetts-Government:*FRS 567 states that, an accountant shall perfom his/ her duty with due care...
(17 November 1823 – 31 May 1908) was an English
England
England is a country that is part of the United Kingdom. It shares land borders with Scotland to the north and Wales to the west; the Irish Sea is to the north west, the Celtic Sea to the south west, with the North Sea to the east and the English Channel to the south separating it from continental...
archaeologist and geologist
Geologist
A geologist is a scientist who studies the solid and liquid matter that constitutes the Earth as well as the processes and history that has shaped it. Geologists usually engage in studying geology. Geologists, studying more of an applied science than a theoretical one, must approach Geology using...
.

John Evans was the son of the Rev. Dr A. B. Evans, headmaster of Market Bosworth
Market Bosworth
Market Bosworth is a small market town and civil parish in Leicestershire, England. It formerly formed a district known as the Market Bosworth Rural District. In 1974 it merged with the Hinckley Rural District to form a new district named Hinckley and Bosworth...
Grammar School
Grammar school
A grammar school is one of several different types of school in the history of education in the United Kingdom and some other English-speaking countries, originally a school teaching classical languages but more recently an academically-oriented secondary school.The original purpose of mediaeval...
, and was born at Britwell Court, Buckinghamshire
Buckinghamshire
Buckinghamshire is a ceremonial and non-metropolitan home county in South East England. The county town is Aylesbury, the largest town in the ceremonial county is Milton Keynes and largest town in the non-metropolitan county is High Wycombe....
. He was for many years manager of the extensive paper manufactory
John Dickinson Stationery
John Dickinson Stationery Limited was a leading British stationery company founded in west Hertfordshire, that was later merged to form Dickinson Robinson Group. In the 19th century, the company pioneered a number of innovations in paper-making.-History:...
of John Dickinson
John Dickinson (1782–1869)
John Dickinson invented a continuous mechanised papermaking process and founded the paper mills at Croxley Green, Apsley and Nash Mills in England, which evolved into John Dickinson Stationery Limited...
(1782–1869) at Nash Mills
Nash Mills
Nash Mills is a civil parish within Hemel Hempstead and Dacorum Borough Council on the northern side of the Grand Union Canal, formerly the River Gade, and in the southernmost corner of Hemel Hempstead...
, Hemel Hempstead
Hemel Hempstead
Hemel Hempstead is a town in Hertfordshire in the East of England, to the north west of London and part of the Greater London Urban Area. The population at the 2001 Census was 81,143 ....
, but was distinguished especially as an antiquary and numismatist, that is, a collector of ancient objects and coins.

Evans was president from 1885 to 1892 of the Society of Antiquaries
Society of Antiquaries of London
The Society of Antiquaries of London is a learned society "charged by its Royal Charter of 1751 with 'the encouragement, advancement and furtherance of the study and knowledge of the antiquities and history of this and other countries'." It is based at Burlington House, Piccadilly, London , and is...
; and he was President of the Numismatic Society from 1874 to the time of his death. He was also president of the Geological Society of London
Geological Society of London
The Geological Society of London is a learned society based in the United Kingdom with the aim of "investigating the mineral structure of the Earth"...
, 1874–1876; the Anthropological Institute of Great Britain and Ireland
Royal Anthropological Institute of Great Britain and Ireland
The Royal Anthropological Institute of Great Britain and Ireland is the world's longest established anthropological organization, with a global membership. Since 1843, it has been at the forefront of new developments in anthropology and new means of communicating them to a broad audience...
, 1877–1879; the Society of Chemical Industry
Society of Chemical Industry
The Society of Chemical Industry is a learned society set up in 1881 "to further the application of chemistry and related sciences for the public benefit". Its purpose is "Promoting the commercial application of science for the benefit of society". Its first president was Henry Enfield Roscoe and...
, 1891–1893; and the British Association for the Advancement of Science
British Association for the Advancement of Science
frame|right|"The BA" logoThe British Association for the Advancement of Science or the British Science Association, formerly known as the BA, is a learned society with the object of promoting science, directing general attention to scientific matters, and facilitating interaction between...
, 1897–1898. He was elected a Fellow of the Royal Society in 1864 and for twenty years (1878–1898) he was treasurer of the Royal Society
Royal Society
The Royal Society of London for Improving Natural Knowledge, known simply as the Royal Society, is a learned society for science, and is possibly the oldest such society in existence. Founded in November 1660, it was granted a Royal Charter by King Charles II as the "Royal Society of London"...
. He was appointed High Sheriff of Hertfordshire
High Sheriff of Hertfordshire
The High Sheriff of Hertfordshire was an ancient High Sheriff title originating in the time of the Angles, not long after the invasion of the Kingdom of England, which was in existence for around a thousand years...
for 1881.

As President of the Society of Antiquaries he was an ex officio trustee of the British Museum
British Museum
The British Museum is a museum of human history and culture in London. Its collections, which number more than seven million objects, are amongst the largest and most comprehensive in the world and originate from all continents, illustrating and documenting the story of human culture from its...
, and subsequently he became a permanent trustee. His academic honors included honorary degrees from several universities, and he was a corresponding member of the Institut de France
Institut de France
The Institut de France is a French learned society, grouping five académies, the most famous of which is the Académie française.The institute, located in Paris, manages approximately 1,000 foundations, as well as museums and chateaux open for visit. It also awards prizes and subsidies, which...
. He was created a KCB
Order of the Bath
The Most Honourable Order of the Bath is a British order of chivalry founded by George I on 18 May 1725. The name derives from the elaborate mediæval ceremony for creating a knight, which involved bathing as one of its elements. The knights so created were known as Knights of the Bath...
(Knight of the Order of the Bath) in 1892.

He died at Berkhamsted
Berkhamsted
-Climate:Berkhamsted experiences an oceanic climate similar to almost all of the United Kingdom.-Castle:...
in 1908.

He was the author of three books, standards in their fieldd:


He also wrote papers on archaeological and geological subjects, notably the papers on Flint Implements in the Drift communicated in 1860 and 1862 to Archæologia.

Evans was married three times, widowed twice, and had six children. He married Harriet Ann Dickinson, daughter of John Dickinson, and they had five children.


Harriet died in 1858, and he married Frances Phelps, who died in 1890. He then married Maria Millington Lathbury and they had a daughter Joan Evans
Joan Evans (art historian)
Dame Joan Evans, DBE was a British historian of French and English mediaeval art.Born at Nash Mills, Apsley, Hertfordshire, she was the daughter of antiquarian and businessman John Evans and his third wife, Maria Millington Lathbury...
.

His eldest son was Sir Arthur Evans
Arthur Evans
Sir Arthur John Evans FRS was a British archaeologist most famous for unearthing the palace of Knossos on the Greek island of Crete and for developing the concept of Minoan civilization from the structures and artifacts found there and elsewhere throughout eastern Mediterranean...
, curator of the Ashmolean Museum
Ashmolean Museum
The Ashmolean Museum on Beaumont Street, Oxford, England, is the world's first university museum...
and excavator of Minoan Crete
Minoan civilization
The Minoan civilization was a Bronze Age civilization that arose on the island of Crete and flourished from approximately the 27th century BC to the 15th century BC. It was rediscovered at the beginning of the 20th century through the work of the British archaeologist Arthur Evans...
. His younger son, Lewis Evans
Lewis Evans (collector)
Lewis Evans was an English businessman and scientific instrument collector.Lewis Evans was the son of Sir John Evans, an archaeologist, and younger brother of the more famous archaeologist Sir Arthur Evans who excavated Knossos in Crete. He studied chemistry at University College London and...
continued with the family business and collected scientific instruments that formed the core of the collection for the Museum of the History of Science, Oxford
Museum of the History of Science, Oxford
The Museum of the History of Science, located in Broad Street, Oxford, is home to an unrivalled collection of scientific instruments from medieval times to the 17th century. Its collection of 18th and 19th-century instruments is also substantial...
. Joan Evans became a historian of French and English medieval art.