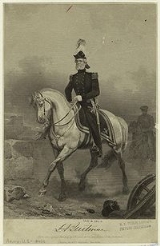 Encyclopedia
John Anthony Quitman was an American
United States
The United States of America is a federal constitutional republic comprising fifty states and a federal district...
politician and soldier. He served as Governor of Mississippi from 1835 to 1836 as a Whig and again from 1850 to 1851 as a Democrat
Democratic Party (United States)
The Democratic Party is one of two major contemporary political parties in the United States, along with the Republican Party. The party's socially liberal and progressive platform is largely considered center-left in the U.S. political spectrum. The party has the lengthiest record of continuous...
and one of the leading Fire-Eaters
Fire-Eaters
In United States history, the term Fire-Eaters refers to a group of extremist pro-slavery politicians from the South who urged the separation of southern states into a new nation, which became known as the Confederate States of America.-Impact:...
.

John A. Quitman studied Classics
Classics
Classics is the branch of the Humanities comprising the languages, literature, philosophy, history, art, archaeology and other culture of the ancient Mediterranean world ; especially Ancient Greece and Ancient Rome during Classical Antiquity Classics (sometimes encompassing Classical Studies or...
at Hartwick Seminary
Hartwick College
Hartwick College is a non-denominational, private, four-year liberal arts and sciences college located in Oneonta, New York, in the United States. The institution was founded as Hartwick Seminary in 1797 through the will of John Christopher Hartwick, and is now known as Hartwick College...
, graduating in 1816. After serving as an instructor at Mount Airy College
Mount Airy, Philadelphia, Pennsylvania
Mount Airy is a neighborhood of Northwest Philadelphia in the state of Pennsylvania.-Boundaries:Mount Airy is bounded on the northwest by the Cresheim Valley, which is part of Fairmount Park. Beyond this lies Chestnut Hill. On the west side is the Wissahickon Gorge, which is also part of Fairmount...
, Pennsylvania
Pennsylvania
The Commonwealth of Pennsylvania is a U.S. state that is located in the Northeastern and Mid-Atlantic regions of the United States. The state borders Delaware and Maryland to the south, West Virginia to the southwest, Ohio to the west, New York and Ontario, Canada, to the north, and New Jersey to...
, he decided to study law.

Upon being admitted to the bar, he moved to Chillicothe, Ohio
Chillicothe, Ohio
Chillicothe is a city in and the county seat of Ross County, Ohio, United States.Chillicothe was the first and third capital of Ohio and is located in southern Ohio along the Scioto River. The name comes from the Shawnee name Chalahgawtha, meaning "principal town", as it was a major settlement of...
in 1820, and from there to Natchez, Mississippi
Natchez, Mississippi
Natchez is the county seat of Adams County, Mississippi, United States. With a total population of 18,464 , it is the largest community and the only incorporated municipality within Adams County...
, in 1821. He purchased Monmouth Plantation in 1826, and the plantation would be in his family for around 100 years (Monmouth (Natchez, Mississippi)
Monmouth (Natchez, Mississippi)
Monmouth Plantation is a historic plantation on a lot built in 1818 by John Hankinson and inhabited by John A. Quitman, a former Governor of Mississippi and well known figure in the Mexican-American War...
). The plantation was used as an archaeological dig site for Dr. Montroville Dickeson of Pennsylvania during his 10 year study of the Natchez Indians in the Mississippi River Valley.

On July 1, 1846, during the Mexican-American War, Quitman abandoned politics and enlisted in the military with the rank of Brigadier General of Volunteers. He commanded a brigade under Zachary Taylor
Zachary Taylor
Zachary Taylor was the 12th President of the United States and an American military leader. Initially uninterested in politics, Taylor nonetheless ran as a Whig in the 1848 presidential election, defeating Lewis Cass...
in northern Mexico.

In the battle Robert Patterson
Robert Patterson
Robert Patterson was a United States major general during the Mexican-American War and at the beginning of the American Civil War...
, the division commander, was wounded and command passed to Quitman. Reinforcements arrived from Veracruz including about 300 marines and were organized into a new brigade under Colonel Watson. The Volunteer Division was divided into two new divisions with Shields'
James Shields
James Shields was an American politician and United States Army officer who was born in Altmore, County Tyrone, Ireland. Shields, a Democrat, is the only person in United States history to serve as a U.S. Senator for three different states...
and Watson's brigade being designated the 4th Division with Quitman in command. In this new capacity Quitman fought at the battles of Contreras
Battle of Contreras
The Battle of Contreras, also known as the Battle of Padierna, took place during August 19–20, 1847, in the final encounters of the Mexican-American War. In the Battle of Churubusco, fighting continued the following day.-Background:...
and Churubusco
Battle of Churubusco
The Battle of Churubusco took place on August 20, 1847, in the immediate aftermath of the Battle of Contreras during the Mexican-American War. After defeating the Mexican army at Churubusco, the U.S. Army was only 5 miles away from Mexico City, the capital of the nation...
. He commanded the southern assault during the battle of Chapultepec
Battle of Chapultepec
The Battle of Chapultepec, in September 1847, was a United States victory over Mexican forces holding Chapultepec Castle west of Mexico City during the Mexican-American War.-Background:On September 13, 1847, in the costly Battle of Molino del Rey, U.S...
and received the surrender of the citadel within Mexico City.

With the fall of Mexico City
Battle for Mexico City
The Battle for Mexico City refers to the series of engagements from September 8 to September 15, 1847, in the general vicinity of Mexico City during the Mexican-American War...
, General Scott appointed Quitman as Military Governor of Mexico City
Mexico City
Mexico City is the Federal District , capital of Mexico and seat of the federal powers of the Mexican Union. It is a federal entity within Mexico which is not part of any one of the 31 Mexican states but belongs to the federation as a whole...
during the U.S.
United States
The United States of America is a federal constitutional republic comprising fifty states and a federal district...
occupation, being the only American to rule from in the National Palace. He received an honorable discharge on July 20, 1848, and returned to Mississippi, serving as Governor of Mississippi in 1850 and 1851.

It was in his capacity as governor that Quitman was approached by the filibuster
Filibuster (military)
A filibuster, or freebooter, is someone who engages in an unauthorized military expedition into a foreign country to foment or support a revolution...
Narciso López
Narciso López
Narciso López was a Venezuelan adventurer and soldier, best known for an expedition aimed at liberating Cuba from Spain in the 1850s..- Life in Venezuela, Cuba, and Spain:...
to lead his filibuster expedition of 1850 to Cuba
Cuba
The Republic of Cuba is an island nation in the Caribbean. The nation of Cuba consists of the main island of Cuba, the Isla de la Juventud, and several archipelagos. Havana is the largest city in Cuba and the country's capital. Santiago de Cuba is the second largest city...
. He turned down the offer because of his desire to serve out his term as Governor, but did offer assistance to López in obtaining men and material for the expedition. López’s effort ended in failure and the repercussion led to Quitman’s being charged with violations of neutrality law and his resignation from the post of Governor so that he could defend himself. The charges were dropped after three hung juries allowed him to avoid conviction.

With the encouragement of President Franklin Pierce
Franklin Pierce
Franklin Pierce was the 14th President of the United States and is the only President from New Hampshire. Pierce was a Democrat and a "doughface" who served in the U.S. House of Representatives and the Senate. Pierce took part in the Mexican-American War and became a brigadier general in the Army...
, Quitman, with assistance from later Confederate General Mansfield Lovell
Mansfield Lovell
Mansfield Lovell was a major general in the Confederate States Army during the American Civil War. He was roundly criticized in Southern newspapers for allowing Union forces to capture the city of New Orleans....
, began preparations in July 1853 for a filibuster expedition of his own. The preparations were nearly complete, with several thousand men prepared to go, when in May 1854 the administration reversed course and undertook steps to stop what it had almost put into motion, presumably because it felt that in the wake of the furor over the passage of the Kansas-Nebraska Act
Kansas-Nebraska Act
The Kansas–Nebraska Act of 1854 created the territories of Kansas and Nebraska, opening new lands for settlement, and had the effect of repealing the Missouri Compromise of 1820 by allowing settlers in those territories to determine through Popular Sovereignty if they would allow slavery within...
that action to add slaveholding territory such as Cuba would cause irreparable damage to the Democratic Party
Democratic Party (United States)
The Democratic Party is one of two major contemporary political parties in the United States, along with the Republican Party. The party's socially liberal and progressive platform is largely considered center-left in the U.S. political spectrum. The party has the lengthiest record of continuous...
in the North.

On March 4, 1855, Quitman was elected to the Thirty-fourth Congress for the Democratic Party, and served in that and the ensuing Congress until his death. In Congress, he was Chairman of the Committee on Military Affairs.

Quitman died on his plantation, “Monmouth,” near Natchez, Mississippi on July 17, 1858, aged 58, apparently from the effects of National Hotel Disease, which he contracted during the inauguration of President James Buchanan
James Buchanan
James Buchanan, Jr. was the 15th President of the United States . He is the only president from Pennsylvania, the only president who remained a lifelong bachelor and the last to be born in the 18th century....
. He was buried in the Natchez City Cemetery in Natchez, Mississippi.