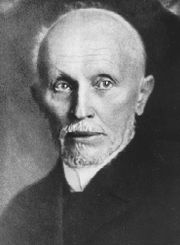 
Johannes Thiele, full name Karl Hermann Johannes Thiele (1860–1935) was a German
Germany
Germany , officially the Federal Republic of Germany , is a federal parliamentary republic in Europe. The country consists of 16 states while the capital and largest city is Berlin. Germany covers an area of 357,021 km2 and has a largely temperate seasonal climate...
zoologist specialized in malacology
Malacology
Malacology is the branch of invertebrate zoology which deals with the study of the Mollusca , the second-largest phylum of animals in terms of described species after the arthropods. Mollusks include snails and slugs, clams, octopus and squid, and numerous other kinds, many of which have shells...
. His Handbuch der systematischen Weichtierkunde (English
English language
English is a West Germanic language that arose in the Anglo-Saxon kingdoms of England and spread into what was to become south-east Scotland under the influence of the Anglian medieval kingdom of Northumbria...
edition published by the Smithsonian under the title Handbook of Systematic Malacology) is a standard work. From 1904 until his retirement in 1925 he was the curator of the malacological collection at the Museum für Naturkunde (Museum of Natural History) in Berlin.
Thiele described more than 1.500 new species of molluscs; until today their types are deposited with the Museum of Natural History in Berlin. Especially important are his works on the Mollusca of the First German Antarctica Expedition
First German Antarctica Expedition
The Gauss Expedition , was the first German expedition to Antarctica, led by Arctic veteran and geology professor Erich von Drygalski in the ship Gauss, which was named after the mathematician and physicist Carl Friedrich Gauss.-Voyage:...
and of the German Deep Sea Expedition aboard the vessel Valdivia.

Thiele's classification of Gastropoda
Gastropoda
The Gastropoda or gastropods, more commonly known as snails and slugs, are a large taxonomic class within the phylum Mollusca. The class Gastropoda includes snails and slugs of all kinds and all sizes from microscopic to quite large...
has been in use up to the past decade. It modified an earlier concept of Henri Milne-Edwards
Henri Milne-Edwards
Henri Milne-Edwards was an eminent French zoologist.Henri Milne-Edwards was the 27th child of William Edwards, an English planter and militia colonel in Jamaica and Elisabeth Vaux, a French. He was born in Bruges, Belgium, where his parents had retired. At that time, Bruges was a part of the...
(1848) with three subclasses: Prosobranchia
Prosobranchia
Not to be confused with the bivalve order Protobranchia.Prosobranchia was a large taxonomic subclass of sea snails, land snails and freshwater snails. This taxon of gastropods dates back to the 1920s...
, Opisthobranchia
Opisthobranchia
Opisthobranchs are a large and diverse group of specialized complex marine gastropods previously united under Opisthobranchia within the Heterobranchia, but no longer considered to represent a monophyletic grouping...
and Pulmonata
Pulmonata
The Pulmonata, or "pulmonates", are an informal group of snails and slugs characterized by the ability to breathe air, by virtue of having a pallial lung instead of a gill, or gills...
. Thiele's classification was based on overall similarity between the species. This classification has been modified over the years, one recent example being the classification of Ponder & Lindberg, 1997
Taxonomy of the Gastropoda (Ponder & Lindberg, 1997)
The taxonomy of the Gastropoda, as revised by Winston Ponder and David R. Lindberg in 1997, is an older taxonomy of the class Gastropoda, the class of molluscs consisting of all snails and slugs...
, based on phylogenetic arguments
Cladistics
Cladistics is a method of classifying species of organisms into groups called clades, which consist of an ancestor organism and all its descendants . For example, birds, dinosaurs, crocodiles, and all descendants of their most recent common ancestor form a clade...
.