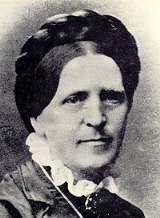 Encyclopedia
Johanna Spyri (12 June 1827 – 7 July 1901) was an author of children's stories, and is best known for her book Heidi
Heidi
Heidi is a Swiss work of fiction, published in two parts as Heidi's years of learning and travel and Heidi makes use of what she has learned.It is a novel about the events in the life of a young girl in her grandfather's care, in the Swiss Alps...
. Born Johanna Louise Heusser in the rural area of Hirzel
Hirzel
Hirzel is a municipality in the district of Horgen in the canton of Zürich in Switzerland.-Geography:Hirzel has an area of . Of this area, 68.9% is used for agricultural purposes, while 18.5% is forested. Of the rest of the land, 9.3% is settled and the remainder is non-productive...
, Switzerland
Switzerland
Switzerland name of one of the Swiss cantons. ; ; ; or ), in its full name the Swiss Confederation , is a federal republic consisting of 26 cantons, with Bern as the seat of the federal authorities. The country is situated in Western Europe,Or Central Europe depending on the definition....
, as a child she spent several summers in the area around Chur
Chur
Chur or Coire is the capital of the Swiss canton of Graubünden and lies in the northern part of the canton.-History:The name "chur" derives perhaps from the Celtic kora or koria, meaning "tribe", or from the Latin curia....
in Graubünden
Graubünden
Graubünden or Grisons is the largest and easternmost canton of Switzerland. The canton shares borders with the cantons of Ticino, Uri, Glarus and St. Gallen and international borders with Italy, Austria and Liechtenstein...
, the setting she later would use in her novels.

In 1852, Johanna Heusser married Bernhard Spyri, a lawyer. While living in the city of Zürich
Zürich
Zurich is the largest city in Switzerland and the capital of the canton of Zurich. It is located in central Switzerland at the northwestern tip of Lake Zurich...
she began to write about life in the country. Her first book titled A Leaf on Vrony's Grave, was published in 1871 and the following year further stories for both adults and children appeared, among them the tale of Heidi
Heidi
Heidi is a Swiss work of fiction, published in two parts as Heidi's years of learning and travel and Heidi makes use of what she has learned.It is a novel about the events in the life of a young girl in her grandfather's care, in the Swiss Alps...
, which she wrote in four weeks. Heidi, the story of an orphan girl who lives with her grandfather in the Alps
Alps
The Alps is one of the great mountain range systems of Europe, stretching from Austria and Slovenia in the east through Italy, Switzerland, Liechtenstein and Germany to France in the west....
, is famous for its vivid portrayal of the landscape, and Heidi has become a personification of the Swiss alps.

Her husband and her only child, a son named Bernard, both died in 1884. Alone, she devoted herself to charitable causes and wrote over fifty more stories before her death in 1901. She was interred in the family plot at the Sihlfeld-A Cemetery in Zürich. An icon in Switzerland, Spyri's portrait was placed on a postage stamp in 1951 and on a 20 CHF commemorative coin
Commemorative coin
Commemorative coins are coins that were issued to commemorate some particular event or issue. Most world commemorative coins were issued from the 1960s onward, although there are numerous examples of commemorative coins of earlier date. Such coins have a distinct design with reference to the...
in 2001.
In April 2010 a professor, searching for children's illustrations, found a book written in 1830 by a German history teacher, Adam von Kamp, that Spyri may have used as a basis for Heidi. The 1830 story is titled Adelheide - das Mädchen von Alpengebirge—translated, "Adelheide, the girl from the Alps". The two stories share many similarities in plot line and imagery. Spyri biographer Regine Schindler said it was entirely possible that Spyri may have been familiar with the story as she grew up in a literate household with many books.