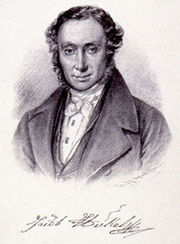 Johann Jakob Heckel was an Austria
Austria
Austria , officially the Republic of Austria , is a landlocked country of roughly 8.4 million people in Central Europe. It is bordered by the Czech Republic and Germany to the north, Slovakia and Hungary to the east, Slovenia and Italy to the south, and Switzerland and Liechtenstein to the...
n taxidermist, zoologist, and ichthyologist from Mannheim
Mannheim
Mannheim is a city in southwestern Germany. With about 315,000 inhabitants, Mannheim is the second-largest city in the Bundesland of Baden-Württemberg, following the capital city of Stuttgart....
.

Though not a formally trained zoologist he worked his way up through the ranks to eventually become the director of the Fish Collection at the Naturhistorisches Museum
Naturhistorisches Museum
The Naturhistorisches Museum Wien or NHMW is a large museum located in Vienna, Austria.The collections displayed cover , and the museum has a website providing an overview as a video virtual tour....
in Vienna
Vienna
Vienna is the capital and largest city of the Republic of Austria and one of the nine states of Austria. Vienna is Austria's primary city, with a population of about 1.723 million , and is by far the largest city in Austria, as well as its cultural, economic, and political centre...
. Not a traveler or explorer like many of the scientists of the time, he remained in Vienna where he studied and catalogued specimens sent to him from the field. Fish were his specialty and he worked with many of the greatest ichthyologists of his time including Cuvier
Georges Cuvier
Georges Chrétien Léopold Dagobert Cuvier or Jean Léopold Nicolas Frédéric Cuvier , known as Georges Cuvier, was a French naturalist and zoologist...
, Valenciennes
Achille Valenciennes
Achille Valenciennes was a French zoologist.Valenciennes was born in Paris, and studied under Georges Cuvier. Valenciennes' study of parasitic worms in humans made an important contribution to the study of parasitology...
, Bonaparte
Charles Lucien Bonaparte
Charles Lucien Jules Laurent Bonaparte, 2nd Prince of Canino and Musignano was a French naturalist and ornithologist.-Biography:...
, Müller
Johannes Peter Müller
Johannes Peter Müller , was a German physiologist, comparative anatomist, and ichthyologist not only known for his discoveries but also for his ability to synthesize knowledge.-Early years and education:...
, and Troschel
Franz Hermann Troschel
Franz Hermann Troschel was a German zoologist who was born in Spandau. He studied mathematics and natural history at the University of Berlin, and beginning in 1840 was an assistant to Martin Lichtenstein at the Humboldt Museum of Natural History in Berlin...
. He wrote more than 60 works, the most notable of which is "The freshwater fishes of the Austrian Danubian monarchy". He worked on it for more than 24 years but died before its final publication, most likely from bacteria he was exposed to while getting a skeleton from a dead sperm whale.
The source of this article is wikipedia, the free encyclopedia.  The text of this article is licensed under the GFDL.