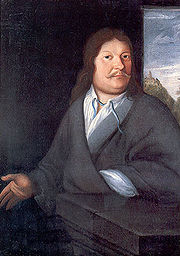 In 1671, he moved his family to Eisenach
Eisenach
Eisenach is a city in Thuringia, Germany. It is situated between the northern foothills of the Thuringian Forest and the Hainich National Park. Its population in 2006 was 43,626.-History:...
, Thuringia
Thuringia
The Free State of Thuringia is a state of Germany, located in the central part of the country.It has an area of and 2.29 million inhabitants, making it the sixth smallest by area and the fifth smallest by population of Germany's sixteen states....
, where he was employed as a court trumpeter and town musician with duties that included performing chorales twice daily from the tower of the town hall, assisting church musicians on feast days, and providing music for civic and municipal functions.

In 1684, he unsuccessfully petitioned to be released from his duties to accept a position in his native town.

He married his first wife Maria Elisabeth Lämmerhirt on April 1, 1668, and had eight children by her, four of whom became musicians, including Johann Sebastian.