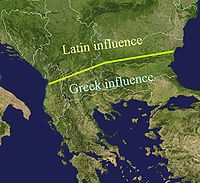 The Jireček Line is an imaginary line through the ancient Balkans
Balkans
The Balkans is a geopolitical and cultural region of southeastern Europe...
that divided the influences of the Latin
Latin
Latin is an Italic language originally spoken in Latium and Ancient Rome. It, along with most European languages, is a descendant of the ancient Proto-Indo-European language. Although it is considered a dead language, a number of scholars and members of the Christian clergy speak it fluently, and...
(in the north) and Greek
Greek language
Greek is an independent branch of the Indo-European family of languages. Native to the southern Balkans, it has the longest documented history of any Indo-European language, spanning 34 centuries of written records. Its writing system has been the Greek alphabet for the majority of its history;...
(in the south) languages until the 4th century. It goes from near the city of Laç
Laç
Laç or also Laçi is a city in northwestern Albania. It is the administrative center of the Kurbin District, which is part of Lezhë County. The official population is 23,400, however, the accuracy of official population statistics is questionable....
i in modern Albania
Albania
Albania , officially known as the Republic of Albania , is a country in Southeastern Europe, in the Balkans region. It is bordered by Montenegro to the northwest, Kosovo to the northeast, the Republic of Macedonia to the east and Greece to the south and southeast. It has a coast on the Adriatic Sea...
to Serdica (now Sofia
Sofia
Sofia is the capital and largest city of Bulgaria and the 12th largest city in the European Union with a population of 1.27 million people. It is located in western Bulgaria, at the foot of Mount Vitosha and approximately at the centre of the Balkan Peninsula.Prehistoric settlements were excavated...
, in Bulgaria
Bulgaria
Bulgaria , officially the Republic of Bulgaria , is a parliamentary democracy within a unitary constitutional republic in Southeast Europe. The country borders Romania to the north, Serbia and Macedonia to the west, Greece and Turkey to the south, as well as the Black Sea to the east...
) and then follows the Balkan Mountains
Balkan Mountains
The Balkan mountain range is a mountain range in the eastern part of the Balkan Peninsula. The Balkan range runs 560 km from the Vrashka Chuka Peak on the border between Bulgaria and eastern Serbia eastward through central Bulgaria to Cape Emine on the Black Sea...
to Odessus (Varna
Varna
Varna is the largest city and seaside resort on the Bulgarian Black Sea Coast and third-largest in Bulgaria after Sofia and Plovdiv, with a population of 334,870 inhabitants according to Census 2011...
) on the Black Sea
Black Sea
The Black Sea is bounded by Europe, Anatolia and the Caucasus and is ultimately connected to the Atlantic Ocean via the Mediterranean and the Aegean seas and various straits. The Bosphorus strait connects it to the Sea of Marmara, and the strait of the Dardanelles connects that sea to the Aegean...
.

This line is important in establishing the area where the Romanian
Romanians
The Romanians are an ethnic group native to Romania, who speak Romanian; they are the majority inhabitants of Romania....
and Aromanian
Aromanians
Aromanians are a Latin people native throughout the southern Balkans, especially in northern Greece, Albania, the Republic of Macedonia, Bulgaria, and as an emigrant community in Serbia and Romania . An older term is Macedo-Romanians...
people were formed (see Origin of Romanians), it is considered that a Latin-speaking people may have formed near this area since there are Latin Vlach speakers to the north and south of it.

It was originally used by the Czech historian Konstantin Jireček in 1911 in a history of the Slavic people.

More recent scholars have revised it somewhat: Kaimio (1979) places Dalmatia
Dalmatia
Dalmatia is a historical region on the eastern coast of the Adriatic Sea. It stretches from the island of Rab in the northwest to the Bay of Kotor in the southeast. The hinterland, the Dalmatian Zagora, ranges from fifty kilometers in width in the north to just a few kilometers in the south....
and Moesia Superior in the Latin area and Moesia Inferior in the Greek sphere. MacLeod (1982) suggests that there may not have been "an official language policy for each and every aspect of life" but that "individual Roman officials [made] common sense ad hoc decisions". He also points out that "even in Greek areas... Latin was the dominant language in inscriptions recording public works, on milestones, and in the army."
The source of this article is wikipedia, the free encyclopedia.  The text of this article is licensed under the GFDL.