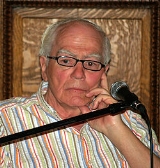 Where can I get copies of columns Jimmy Breslin wrote for the New York Herald Tribune? Looking for a column about the Washington Street meat market
More
x