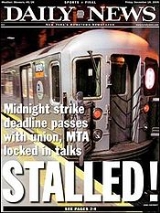 Overview
The Daily News of New York City is the fourth most widely circulated daily newspaper
Newspaper
A newspaper is a scheduled publication containing news of current events, informative articles, diverse features and advertising. It usually is printed on relatively inexpensive, low-grade paper such as newsprint. By 2007, there were 6580 daily newspapers in the world selling 395 million copies a...
in the United States
United States
The United States of America is a federal constitutional republic comprising fifty states and a federal district...
with a daily circulation of 605,677, as of November 1, 2011.

The first U.S. daily printed in tabloid form, it was founded in 1919, and as of is owned and run by Mortimer Zuckerman
Mortimer Zuckerman
Mortimer Benjamin "Mort" Zuckerman is a Canadian-born American business magnate with interests primarily in magazines, publishing, and real estate. He is now a naturalized citizen of the United States....
. It has won ten Pulitzer Prize
Pulitzer Prize
The Pulitzer Prize is a U.S. award for achievements in newspaper and online journalism, literature and musical composition. It was established by American publisher Joseph Pulitzer and is administered by Columbia University in New York City...
s.
The Daily News was founded by Joseph Medill Patterson
Joseph Medill Patterson
Joseph Medill Patterson was an American journalist and publisher, grandson of publisher Joseph Medill, founder of the Chicago Tribune and a mayor of Chicago, Illinois.-Family:...
in 1919. It was not connected to an earlier New York Daily News, which had been founded in the 1850s, flourished under the stewardship of Benjamin Wood
Benjamin Wood
Benjamin Wood was a nineteenth-century American politician from the state of New York during the American Civil War.He was the brother of US congressional representative and New York City Mayor Fernando Wood...
, and faltered after his death in 1900, going through three owners (including his widow) before suspending publication in mid-December 1906.